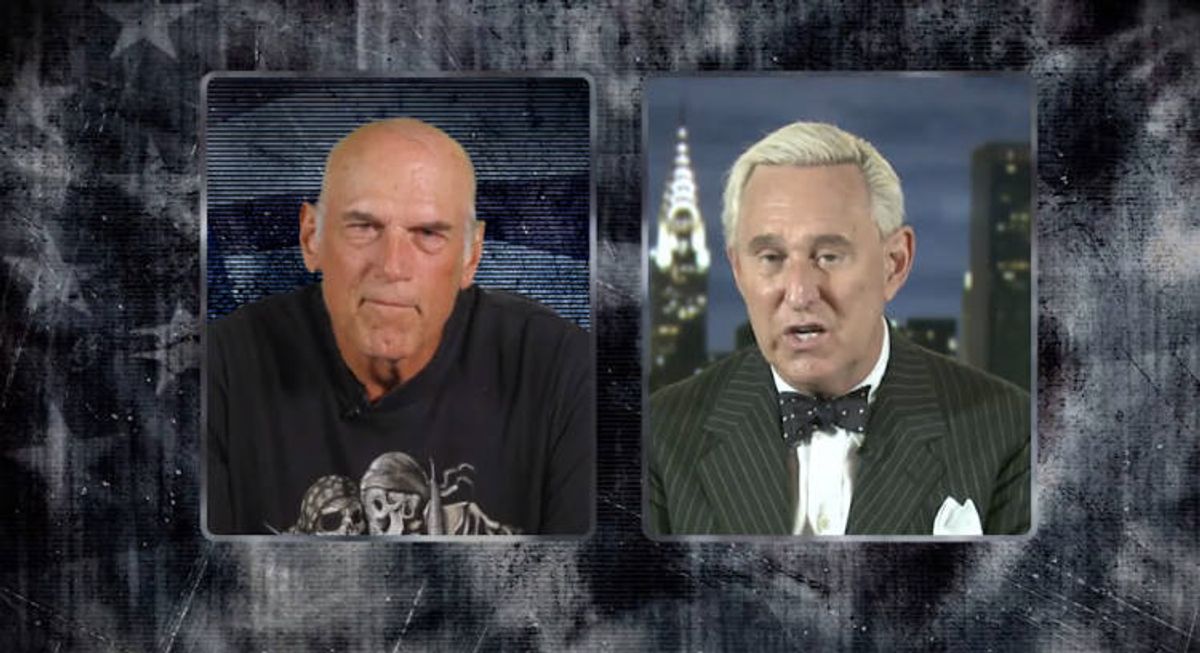 Notorious Donald Trump advisor Roger Stone has been let go from the Trump campaign (again) and has been on a media storm to set the record straight on why he was dumped, and why he still supports The Donald.

During an interview on "Off The Grid Jesse Ventura," Stone explained that "I’m able to speak more freely and I feel liberated." Stone, who has called himself "the ultimate Trump loyalist,” told the pro wrestler-turned-Minnesota governor-turned conspiracy theorist Ventura that he had been working to convince Trump to run for president since 1988.

On Saturday, Trump’s campaign issued a statement saying it had fired Stone because “Roger wanted to use the campaign for his own personal publicity.” Stone responded by claiming he'd left of his own volition, releasing a resignation letter declaring that “current controversies involving personalities and provocative media fights” had become a distraction from the campaign’s message. Stone explained to Ventura that he was disappointed a staffer had "disserved Trump’s campaign" by leaking that the New York real estate mogul had a phone conversation with former president Bill Clinton ahead of announcing his White House bid and that he disagreed with Trump's "cul-de-sac of bickering with media personalities."

"I see the same attacks happening to Donald Trump that get focused at me, especially by this mainstream media," Ventura lamented.

"I decided to go rogue. I still support Donald Trump very strongly, even though we have some disagreements on issues. We still agree on the number one issue: cleaning up the special interest corruption of our government," Stone explained. "He’s totally uncontrollable, he’s un-buyable," Stone exclaimed, citing Trump's independent wealth as his most attractive quality.

"It’s going to take a big man to fix this. A Donald Trump, a Jesse Ventura, even a [former GOP New Mexico Gov. and 2012 Libertarian nominee] Gary Johnson: someone who is an outsider," Stone argued before adding, "if Trump is not the Republican nominee, I most likely am going to support the Libertarian nominee. I personally hope that’s either Jesse Ventura, which I always thought was a great idea or Governor Gary Johnson who I think made a very credible race." Ventura then hinted at his own potential White House run:

VENTURA: Not a bit, and you know, when you talk Libertarian, a Johnson-Ventura team might work out pretty well for the Libertarians because I can get a lot more publicity than Gary can usually.

VENTURA: Well I know that, and they’ve contacted my son and he’s made that known to me.   I don’t even want to get in the fray until you’re down to the two candidates, because otherwise you’ve got to spend these billions of dollars and I don’t want to spend them. I think you get in the race next June and if you time it correctly, you can knock them off in November. That’s too much into the future right now though.

Ventura told conspiracy theory radio host Alex Jones last month that he was considering a presidential run outside of party affiliation, even rejecting the Libertarian Party. On his own show, Ventura outlined his intentions to run in an effort to halt "global fascism." Ventura has also previously indicated he supported the campaign of Independent Vermont Senator Bernie Sanders and shared his appall that "the blacks" would dare to protest "the most liberal progressive candidate we’ve had in probably half a century—or more." Stone argued that the populist appeal of "anti-establishment figures," Trump and Sanders was "exciting and refreshing" but seemed to offend Ventura when he failed to cite the former Minnesota governor as a potential Trump VP choice: (emphasis added)

VENTURA: Let’s say hypothetically Donald Trump triumphs. Who do you think he should pick for his VP?

STONE: The only other non-career politician who’s a Republican—because I do think Trump needs to pick a Republican—in this race is Dr. Ben Carson. He’s a brain surgeon. He doesn’t’ come from the world of politics. He’s also a straight talker. I think Trump-Carson would be a very strong ticket. Now that’s just my opinion. Beyond that, I’d try to find someone else outside the discipline of politics. He doesn’t need some governor or former governor or Senator, he needs somebody who comes from another world.

VENTURA: Roger, that throws me out of the equation because I’m a former governor. Do you think Donald would ever think of asking me?

STONE: I think people view you as an outsider. But Jesse, you’d have to become a registered Republican under the rules of the convention, and I don’t think I could ever get you to do that.

Stone ended the interview with his usual flare: claiming the Bush family trafficked drugs, accusing former president Bill Clinton of being a "serial rapist," and rehashing delusional accusations of murder at the Clinton clan.