The Donald voices his support for reproductive health services, because up is down and down is up 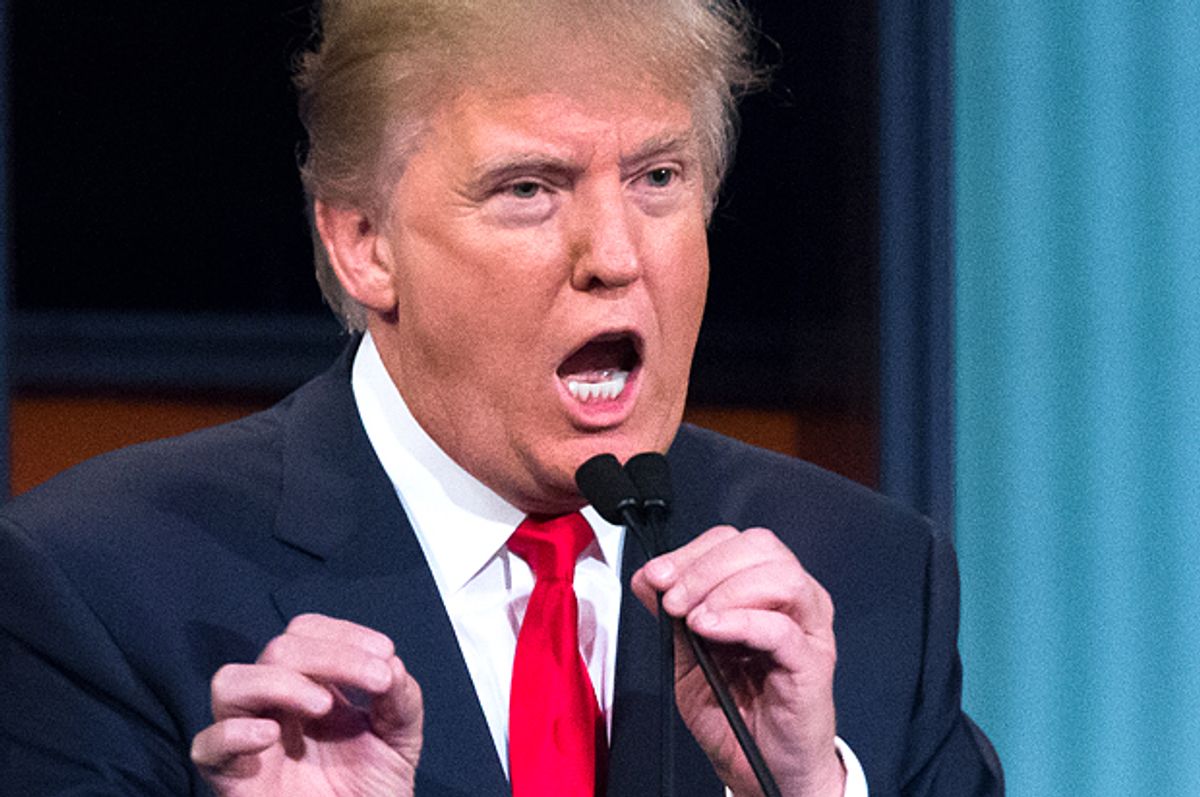 If you felt a tremor in the Force today, it was due strictly to the fact that Monday night on Fox News Channel, Donald Trump said something that actually made sense. Not only that, but what he said was in direct defiance of his most loyal supporters (who are known on Twitter, by the way, as "Trumpkins").

Sure, as the old saying goes, even a stopped watch is right twice a day; but this was odd given how his party's entire thing right now is about shaming and de-funding Planned Parenthood. Yet Trump defended the embattled healthcare provider with, possibly, the most salient elevator pitch available.

Of the organization, Trump said that abortion services are "fairly small part of what they do," and that "we have to look at the positive also for Planned Parenthood."

Well, yeah. Duh. But coming from the GOP presidential frontrunner, it's shocking to hear, especially knowing how Trump tends to pop off with crazy-bombs -- like boasting that he'd be "the greatest jobs president God has ever created" or that he'd "build a wall like nobody else can build a wall." But his Planned Parenthood defense was a welcome dollop of lucidity in a universe of silliness, not just from Trump but the entire Republican leadership.

As I've already noted at Salon, 97 percent of what Planned Parenthood does has nothing to do with abortions. Realistically, even if it was as low as 75 or 60 percent, the fact remains that most of its mission is to provide life-saving medical services like cancer screenings, HIV tests and contraception services -- which, by the way, help to prevent abortions by as many 350,000 every year, along with preventing around a million unplanned pregnancies per year, according to the nonpartisan Guttmacher Institute.

So the truth is: Planned Parenthood saves lives. It's a reality that's easy enough to grasp, even for a reality show doofus like Trump.

What's truly remarkable, though, is that Trump has nothing to gain from saying it. Now, it's entirely possible he was attempting to compensate for his horrendous remarks about Megyn Kelly. Okay, sure. But that'd only help him with women on the left, or the increasingly rare pro-choice Republicans.

Nevertheless, it made him seem far less disingenuous than most of what's ejected from his bulbous mouth like a t-shirt cannon with a bad wig. Indeed, most of the time, Trump's history of saying what's most convenient tends to make serial flip-flopper Mitt Romney seem like an iron-willed pillar of steadfast integrity. Realistically, Trump's remarks -- presented on Sean Hannity's show no less -- can only serve to infuriate his most faithful Trumpkins, while allowing the rest of us to bask in to glorious chaos of Trump's candidacy.

The real question is whether his growing base will care. Most pro-Trump focus group respondents are enthusiastic about his honesty and, weirdly, the fact that he's just like them -- you know, other than his $10 billion fortune and GOP frontrunner status for the office of President of the United States. It's unclear whether the Planned Parenthood issue is even on the radar of Trump's legion of fanboys. So perhaps they'll chalk it up to some sort of razzle-dazzle political calculus. It's simply difficult to imagine something like this might slow his momentum, and even if it did, he's still well outside the margin of error against his second place challenger, Jeb Bush.

Weirdly, even though he's generally full of it, you have to admire that he said what he said. Granted, he still noted that he wanted to end all abortions, but he didn't couch his Johnny-come-lately opposition to abortion in the bogus frame of Planned Parenthood's (fake) villainy, nor did he grapple-gun himself to the fraudulent videos that claim to indict the organization's completely legal tissue donation process -- which, not for nothing, also helps to save lives. If a guy as unbalanced as Trump can embrace this reality, how exponentially more unbalanced is the rest of the GOP for completely failing to acknowledge what's explicitly true? The answer is, it turns out, obvious.