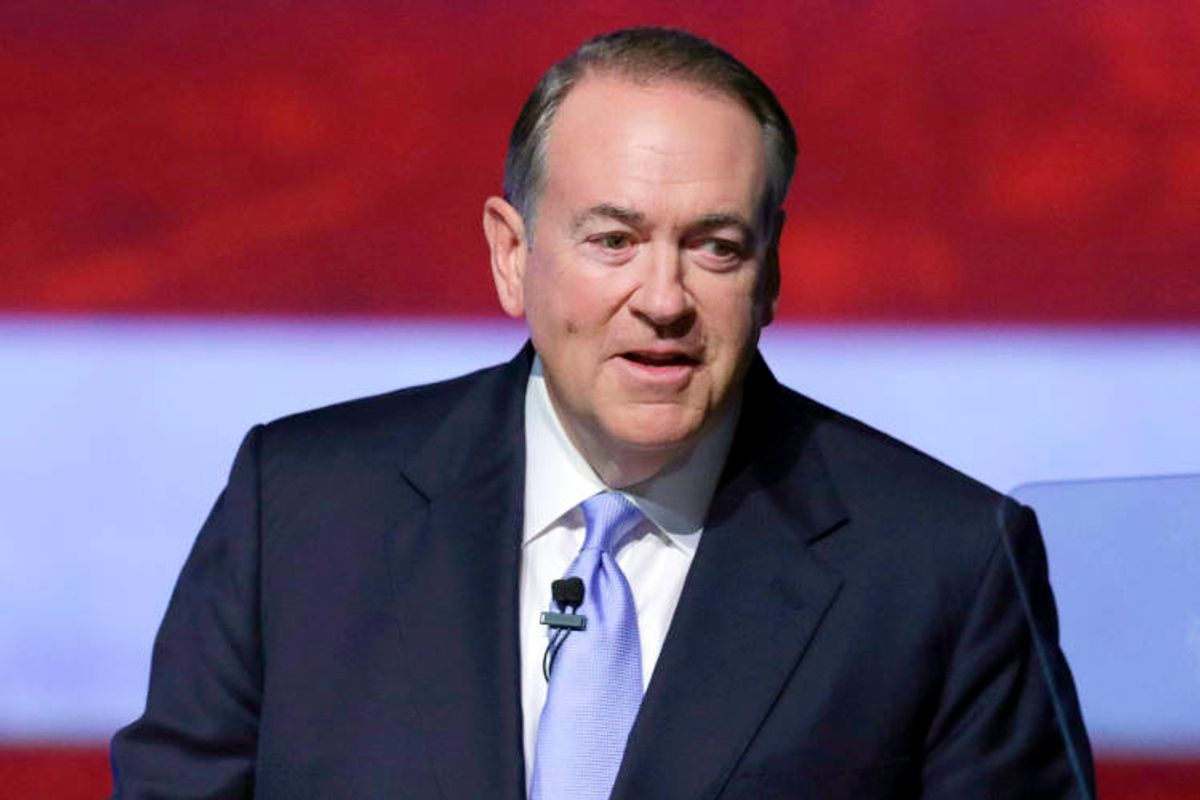 Mike Huckabee is playing the ultimate game of presidential one-upmanship. After winning the award for the most extreme reaction to the Iranian nuclear deal and then revealing the extreme lengths he'd go to shut down abortion clinics across the country, Huckabee's out to with the most extremely unrealistic campaign pledge -- 6 percent annual economic growth -- in an attempt to one-up the comical promises of 4 percent growth from the Jeb Bush campaign.

The former Arkansas governor and 2008 Iowa Republican caucus winner took to the famed "Soapbox" at the Iowa State Fair today to sell his flat-tax plan, touting it as the key to tremendous 6 percent economic growth. "I believe we can get it to 6 or higher with a fair tax. I'm convinced," Huckabee told the crowd of potential caucus-goers. "I guarantee you we will goose the economy if you bring $11 trillion of working capital back to this country."

But Huckabee, like Bush with his fantasies of 4 percent growth, appears to be operating outside of economic realities.

“There’s not a reason in the world we can’t grow at 4 percent a year,” Bush blustered during his campaign kick-off. “And that will be my goal as president.”

In disputing Bush's assertion of 4 percent growth under his future administration, The New York Times referred to the the gap between the level of economic activity should the U.S. reach full employment with businesses operating at full capacity and the actual economic reality to explain that "if the economy continues growing at the 2.2 percent annual rate of the last several years between now and inauguration day in January 2017, the next president will take office with no output gap at all." Hence, no matter who takes office in 2016, the U.S. is likely to already be near its full economic capacity:

In the early years of the Obama presidency, there was a huge “output gap” between the nation’s economic potential and its reality — $1.1 trillion in the spring of 2009, based on the Congressional Budget Office’s estimate of potential G.D.P.

That was the gap between the level of economic activity the C.B.O. thought would be plausible if there had been full employment and businesses operating at full capacity, as compared with the actual economic reality of that time.

While there was a huge output gap back in 2009, the growth in excess of 2 percent per year recorded in the six years since then, while disappointing, has been closing it. In the first quarter, the output gap was down to $426 billion, or about 2.6 percent of potential G.D.P.

If the economy continues growing at the 2.2 percent annual rate of the last several years between now and inauguration day in January 2017, the next president will take office with no output gap at all. In fact, under that math the economy would be functioning a bit above potential in the first quarter of 2017, $7 billion worth.

Indeed, if a President Jeb Bush achieved 4 percent growth each year, the G.D.P. at the end of his first term would be nearly $1.1 trillion higher than the C.B.O. believes to be the nation’s potential economic output at the start of 2021. That would be nearly as big an economic outperformance as the depths of the Great Recession were an underperformance.

Since that is what the Times' senior economics correspondent, Neil Irwin, calculated from Bush's fantastical 4 percent growth promises, it's safe to assume doing the math on Huckabee's 6 percent growth delusions isn't worth it.