“It’s as if every man, woman, and child smoked 1.5 cigarettes each hour" 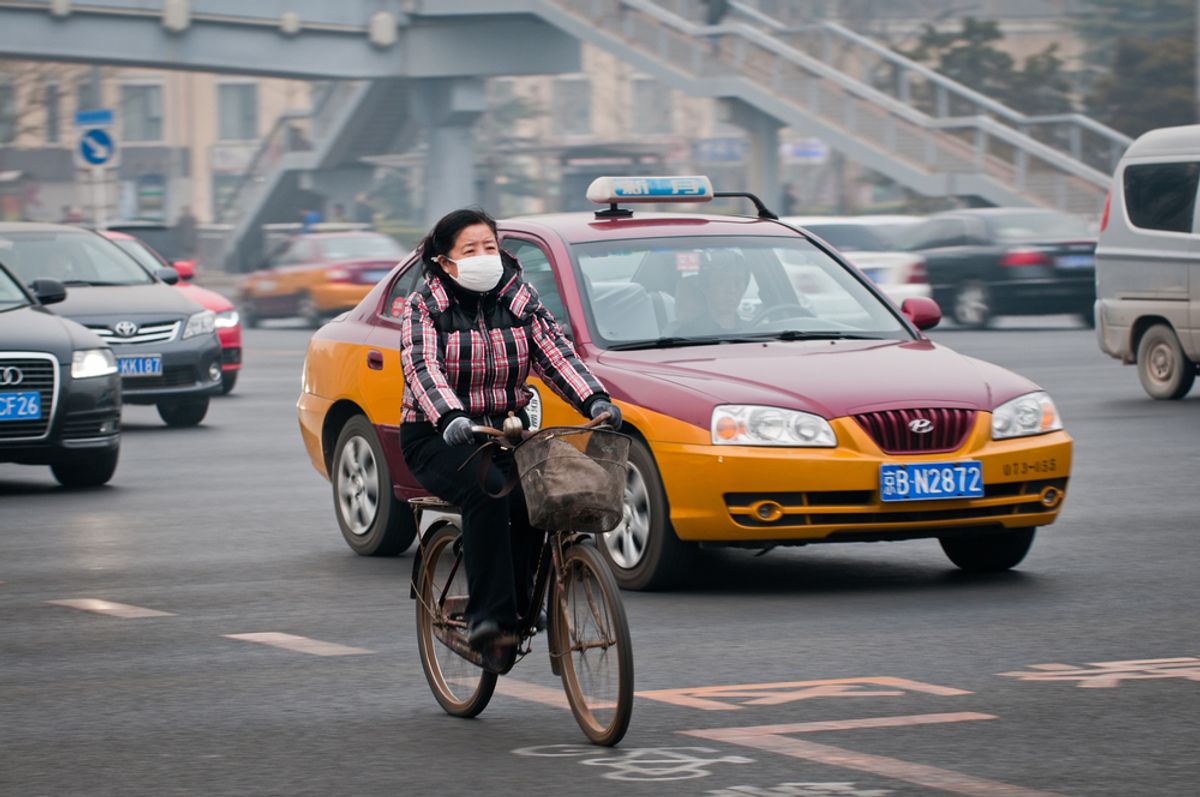 While coal producing states bristle at the U.S. Environmental Protection Agency's new rules for coal-fired power plants, China's confronting the full implications of its coal-fired air pollution crisis -- a crisis that, according to a new analysis to be published in the journal PLoS ONE, is responsible for 17 percent of the country's deaths, or 1.6 million people each year.

The researchers, from Berkeley Earth, a non-profit that analyzes climate issues, are calling it "the greatest environmental catastrophe in the world today." Almost everyone in China, they found, spends a significant amount of time breathing dangerous air: 92 percent of people are exposed to PM 2.5 -- the fine particulate matter most harmful to lungs -- at levels the EPA considers to be "unhealthy" for 120 hours or more. For more than a third of the population -- 38 percent -- the air they breathe is, on average, "unhealthy" all of the time.

“When I was last in Beijing, pollution was at the hazardous level; every hour of exposure reduced my life expectancy by 20 minutes," said study co-author Richard Muller in a statement, underscoring the implications of living in such conditions year-round. "It’s as if every man, women, and child smoked 1.5 cigarettes each hour."

Most of the pollution, the researchers say, come from coal, and while much of it is descending upon Beijing, its source is in fact industrial regions, some hundreds of miles away -- and where the air quality is even worse than in the capital. But because the sources are so far-flung, the authors warn, it may be tough to reduce pollution to levels considered safe in time for the 2022 Olympics. The Winter Games aren't the only problem that the rest of the world faces from China's deadly emissions. Studies have documented how the country's smog can travel all the way to California; a recent study found that ozone blown east from China has offset the United States' reductions in that particular pollutant by as much as 43 percent.

China continues to insist that it's serious about cracking down on coal, both in anticipation of the Olympics and as part of its pledge to cut greenhouse gas emisisons in the lead-up to the global climate negotiations taking place in Paris this winter. The growing recognition of the more immediate, and clearly disastrous, health effects of the pollution, it's hoped, will only contribute to the country's urgency.