Jeb signals openness to another of his brother's failed policies: torturing detainees. And he's not alone! 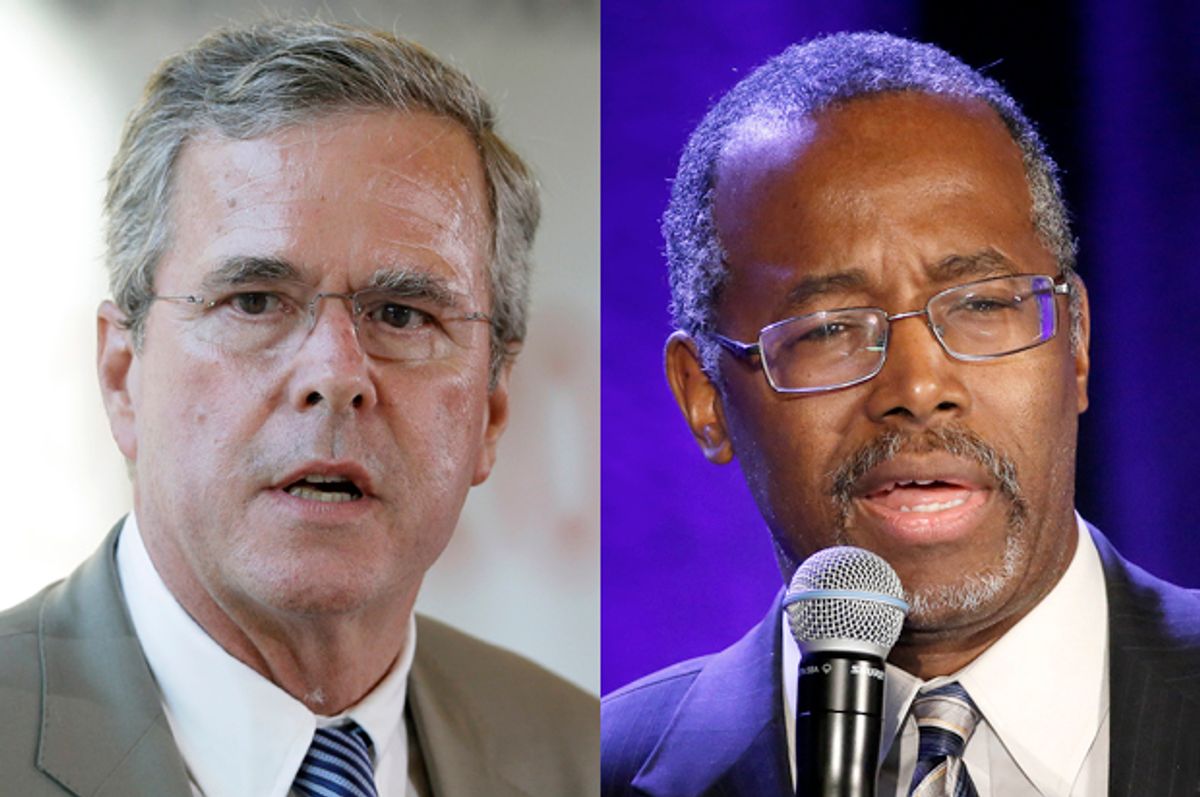 Half a year ago, while speaking at the Chicago Council on Global Affairs, Jeb Bush made a show of distancing himself from the Bush family foreign policy legacy. “I am my own man,” he said, “and my views are shaped by my own thinking and own experiences.” It was transparent nonsense at the time he said it – Jeb was a fervent Iraq war supporter and his foreign policy team is built from the same neoconservative chuckleheads who shepherded George W. Bush into the Iraq catastrophe. But the Bush Doctrine still retains its well-earned political toxicity, and Jeb had to say something to at least give the impression that he wouldn’t be a replica of his brother on the world stage.

In the months since making that declaration, though, Jeb has shown no indication that his foreign policy preferences are substantively different from those of George W. Bush – he’s still defending the Iraq war, he wants American combat troops to fight in Iraq, he’s pushing regime change in another Middle Eastern country (Syria), and he favors a hardline posture on Iran that eschews diplomacy in favor of isolation and tough talk.

And now we can add torture to the list of Bush-era policies that Jeb might bring back. “I don’t want to make a definitive, blanket kind of statement,” he said when asked if he’d undo Barack Obama’s executive order banning “enhanced interrogation methods” – the gross bureaucratic euphemism for torture techniques approved by his brother. “This is something that I’m actually struggling with because I’m running for president … and when you are president your words matter.”

This is interesting, and not just because one of the non-Trump favorites for the Republican nomination can’t give a straight answer on whether he’d return the U.S. to its morally repugnant days of torturing detainees. There’s a real divide emerging within the Republican presidential field over the use of torture.

In offering a squishy “maybe” on the issue, Jeb aligned himself with Marco Rubio, who strongly defends the people who authorized and carried out the torturing of prisoners during the Bush years. Two months ago, when the Senate voted on an amendment to give Obama’s ban on torture the strength of law, Rubio skipped the vote but issued a statement denouncing efforts to ban torture, arguing that he didn’t want to deny “future commanders in chief and intelligence officials important tools for protecting the American people and the U.S. homeland.” Rubio’s thinking on the issue is reflected in his creepily authoritarian slogan: “Nothing Matters If We Aren’t Safe.”

There are several other candidates in the race who are either advocates of or open to the use of torture. Ben Carson was asked about “enhanced interrogation techniques” at last week’s debate and said “what we do in order to get the information that we need is our business, and I wouldn’t necessarily be broadcasting what we’re going to do.” Rick Perry has said flat-out that he would use torture techniques and even offered that it would be “inhumane” to not torture a detainee “if we know for a fact that there are individuals that are going to kill maybe millions of Americans.” In his previous life as a Fox News pundit, John Kasich was an aggressive advocate for waterboarding – here’s a representative sample of his commentary on the issue, from a 2007 broadcast of “Hannity & Colmes”:

KASICH: Well, you know what? Alan, all the experts are divided as to what waterboarding is all about and whether it gets to the area of torture. They say that any of these aggressive techniques have to be applied very carefully and individually.

And one thing you don't want to do, Alan, if you know that there's somebody out there who wants to blow up New York City or any other city in America. We want to be able to be aggressive.

On the opposite side of the debate we have Rand Paul, Ted Cruz, and Lindsey Graham, all of whom have staked out the eminently defensible position that the torture is immoral and entirely unjustified.

The debate over torture is an important one, given that we’re still coming to terms with just how brutal, chaotic, and mismanaged George W. Bush’s “enhanced interrogation” regime was. The Senate Intelligence Committee’s report on the many failures and overall uselessness of the post-9/11 CIA torture program prompted the American Psychological Association to examine the role its personnel played in crafting and propping up the brutal policy. The results of its investigation were shocking:

In early July, a devastating independent report by a former federal prosecutor determined that more than a decade ago APA leaders — including the director of ethics — began working secretly with military representatives. Together they crafted deceptively permissive ethics policies for psychologists that effectively enabled abusive interrogation of war-on-terror prisoners to continue.

This is a symptom of the moral corruption brought on by the Bush administration’s indefensible torture policies. It’s appalling that Jeb Bush and several other candidates for president are even considering a return to this disgusting chapter of our history.