Jeb just can't help himself: The myth of his electability continues to fade 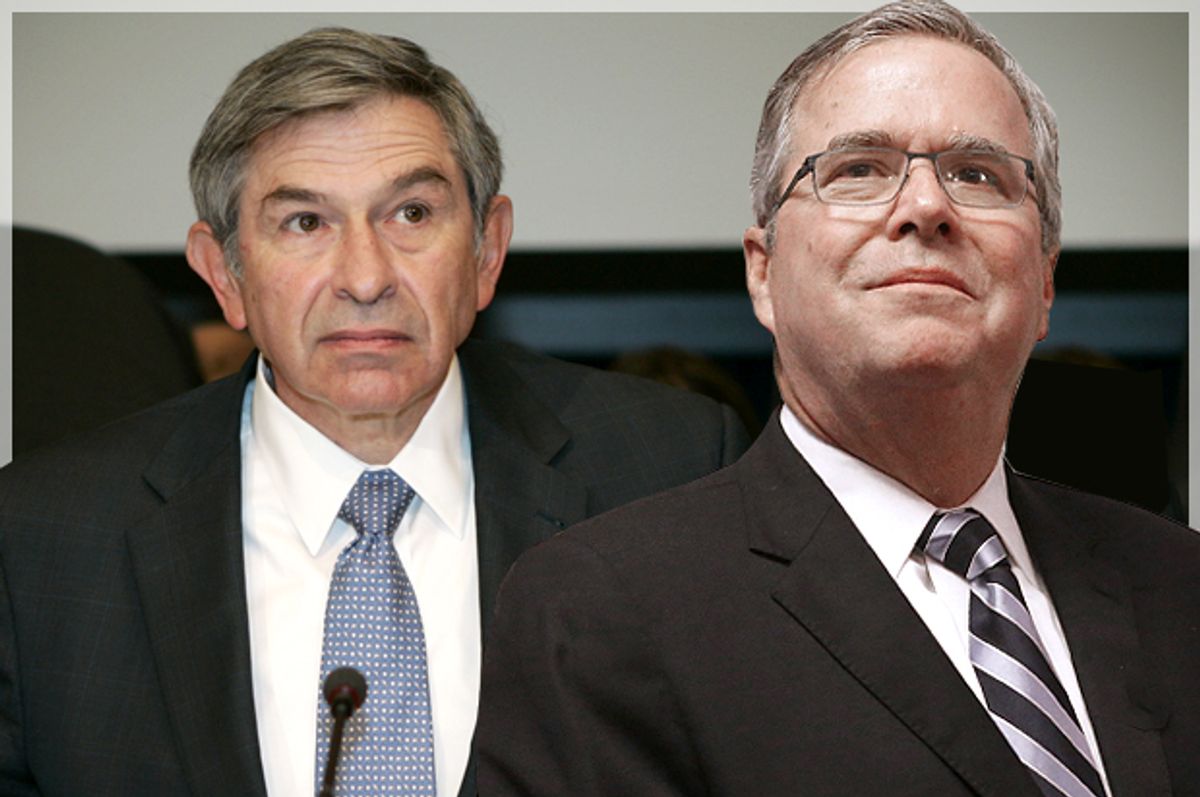 I’m running out of ways to describe the awfulness of Jeb Bush’s presidential campaign. If or when he fails, his jocular Thursday comment about the Iraq war -- "Taking down Saddam Hussein turned out to be a pretty good deal" – will be in every highlight reel.

Not only is Jeb! now fully embracing his brother’s disastrous, bloody war of choice. He’s talking about it in a glib salesman way, reminding us that the war was in fact “a pretty good deal” for his cronies: for Halliburton spinoff KBR, the entire defense industry, and a metastasizing web of private security contractors including disgraced giant Blackwater. The families of the dead and wounded in Iraq might disagree.

Things got worse in his speech Friday, where he volunteered that “Paul Wolfowitz is giving some advice.” Wolfowitz, the scowling face of the smug neocons.

I’ve asked this before: Does Bush even want to win?

Donald Trump claimed Bush had his “47 percent moment” – the comment that doomed Mitt Romney -- when he suggested we’re spending too much on women’s health. But his dumb remark about toppling Saddam being “a pretty good deal” could rival that. Then again, there are so many contenders for the inconvenient, inadvertent truth-telling moment that could doom Bush: suggesting underpaid American workers “need to work more hours;” that “the federal government shouldn’t be doing this” when asked about the minimum wage; arguing that we should be “phasing out” Medicare.

Of course he walked all of those remarks back. Let’s see if he tries to do the same with this one.

All of these campaign flubs are occurring against the backdrop of the strangest presidential primary of our lifetimes, in which Donald Trump has taken the lead nationally, as well as in Iowa and New Hampshire, with 16 lackluster rivals trying to catch up. For a while Bush strategists were pretending the Trump candidacy benefited Bush, by depriving his rivals of the attention they need to gain traction, and predicting Bush would consolidate support as some of the bloated GOP field dropped out. I used to think that myself, to be honest. But now I’m not so sure.

Whose support does Jeb! think he will consolidate as the campaign goes on? Which of the non-Trump candidates is likely to throw him support? Sen. Ted Cruz and Ben Carson are surging after last week's debate, and neither man's supporters seem a likely match for Bush. Cruz is second so far in fundraising, so he isn’t going anywhere, and if Carson stumbles, his voters won’t flock to Bush. Among the current bottom-tier candidates, who might be expected to leave the race early -- Governors Rick Perry and Bobby Jindal, plus Mike Huckabee and Rick Santorum -- all are to Bush’s right and seem unlikely to throw him their support (which is a collective 9.5 percent right now, anyway). Sen. Rand Paul is flailing: he's averaging 4.5 percent in national polls and has fallen from third to ninth place in Iowa (once a stronghold, thanks to his dad) and from third to sixth in New Hampshire. But his supporters aren't a natural for Bush, either.

Of the candidates who are closer to the Bush wing of the party – Senators Marco Rubio and Lindsey Graham, Governors John Kasich, Chris Christie and Scott Walker, former Gov. George Pataki and perhaps Carly Fiorina – only Pataki, Christie and Graham seem like contenders who aren’t contending, and probably won’t. But by definition, that means none of them has much support he can turn over to Bush if he leaves the race, since they’re each polling between 0 and 3.8 percent.

For now, Fiorina and Kasich are rising, so they’re not going anywhere soon. Walker is sinking, but I have a hard time thinking that the ambitious Wisconsin governor and his moneyed backers will pull the plug quickly (although if Walker loses his neighboring state of Iowa, where he's now dropped from a persistent 1st place to 3rd, the humiliation might drive him back to Madison). Rubio shares a natural constituency with Bush, and you can imagine a scenario in which he could be persuaded by mutual friends to step aside. But with Bush so weak, and with a decent war chest, he might think it should be Jeb who steps aside. And he might find others in the GOP establishment who agree.

Even if Trump fades, who fattens up on his voters? It's probably not Bush. Trump fading or even dropping out would certainly shake up the race, and it’s certainly possible, if not likely, that will happen. Trump skeptics comfort themselves by saying his frontrunner status reflects his celebrity as well as the crowded field – and that the 20-25 percent support he’s getting in polls isn’t a commanding lead anyway.

But that’s where Mitt Romney rode out much of the 2012 campaign: from June 2011 to February 2012, according to Real Clear Politics, Romney hovered between 20 and 28 percent in the polls. For most of that time he was ahead of the pack, though he did surrender the polling lead to Newt Gingrich, Herman Cain and Rick Santorum, briefly. He only began to break away once he’d won some early primaries, and some rivals dropped out.

Romney benefited from candidates to his right splitting the Tea Party vote, while he chased out moderates like Jon Huntsman and Tim Pawlenty early. Conceivably Bush could benefit from the same split on the right, especially if Trump stumbles. But Bush was supposed to chase away a lot of his rivals with his presumed electability and large war chest. With every gaffe and stumble, the myth of his electability dissipates. He’s still got that war chest, though, so we can’t count him out.