"This is about money. Who got it, and who don't”: A Hotlanta housing crisis boils over

After a summer without sufficient air conditioning, Friendship Tower residents are taking to the street in protest 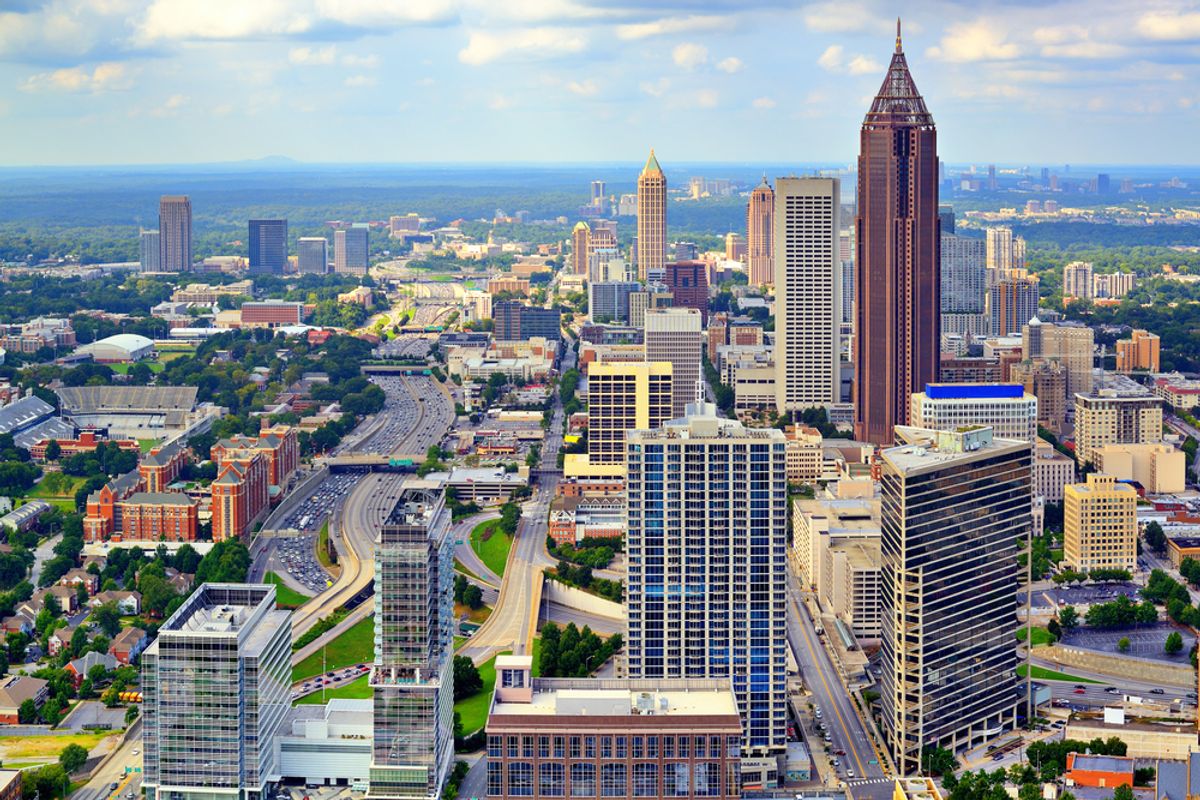 Across the Southeast, this summer was among the hottest in recorded history, with several cities shattering heat records.

This has been particularly painful for the residents of so-called Friendship Tower, an apartment for senior citizens in downtown Atlanta, which has been without functioning air conditioning for nearly three months.

Friendship Tower was built with funding from the Housing and Urban Development department's Section 202 program, which provides subsidies for housing seniors ages 62 and older. Yet it has a private owner: Friendship Baptist Church, Atlanta's “first black Baptist autonomous congregation,” which independently organized itself shortly after the conclusion of the Civil War.

When the apartment complex's air conditioning abruptly malfunctioned in late April, residents hoped FBC would quickly spring into action to fix the system and protect the senior citizens, many of whom have disabilities such as asthma, from the harsh Georgia summer.

A protestor with his family.

But three weeks passed and the system remained in disrepair. Temperatures in some apartments reach higher than 90 degrees, according to readings taken by a local news station. Atlanta Mayor Kasim Reed, a pro-business Democrat who recently helped FBC sell part of its property to the Atlanta Falcons for its new stadium for $19.5 million, appeared at the site and promised he would do “everything that I can to make sure those good people have air right away.”

Weeks passed, and the temporary small air conditioning units Friendship Tower placed into individual apartments did little to cool down residents. Federal officials from HUD inspected the units and deemed they were sufficient for cooling. The residents disagreed.

Eventually, residents filed a lawsuit against FBC, leading to a late May ruling by a local judge that the complex was failing to care for the welfare of its citizens, ordering the complex to provide an additional air conditioner for each unit. The judge was likely impacted by the emotional testimony from residents, one of whom described passing out from heat; another outright collapsed.

“The residences are in a livable condition; not ideal but livable,” protested attorney Robert Bozeman, hired by FBC to represent its case. Those were odd words coming from a lawyer whose professional webpage boasts about “providing strong and effective representation to those injured as a result of wrong or negligent acts of others.”

In mid-June, the tower installed a new comprehensive air conditioning system, but it failed to properly cool the units. Some units still reached a hot 87 degrees. The facility attempted to evict some of the tenants, but was blocked by the courts. By the end of July, tenants took their grievances directly to FBC, marching into one of its Sunday services while singing and praying. Perhaps this direct action finally spurred the church leadership to take a more direct interest; the church's minister visited the complex shortly after the protest.

The city of Atlanta moved to allow a group of residents to stay at a hotel while Friendship Tower was still in disrepair; in the first week of August, FBC lawyers told a dozen of these residents that they must vacate their hotel rooms and return to the sweltering heat of their apartments. Residents also began to receive letters demanding rent for the month by August 10, even though the complex had previously told them they would not have to pay rent for July and August. Some of the tenants have filed a motion to recuse the judge presiding over their case, citing communications between the judge and management outside the courtroom.

On August 5, Atlanta Mayor Kasim Reed returned to Friendship Tower. He inspected five different apartments and met with residents, citing improvements. The local news claimed this visit showed the problems were “nearly resolved,” but the residents disagreed. The next day, they held a rally outside the apartment complex, calling attention to FBC's continued refusal either to fix the air conditioning or move all residents to a more humane location.

The rally, which I attended, brought together around three dozen people and was organized by Derrick Boazman, a local radio host with roots in the community. Boazman introduced a number of activists and concerned individuals who had come out to support the struggling seniors.

Bobby Heard, who is head of the tenants association at Friendship, described the mayor's visit as a sort of whitewashing of the problem. “The mayor came down here and inspected five units,” he explained. “But there's a hundred units.”

Another resident, who had temporarily moved out due to the unbearable heat, explained that his thermostat that day read 87 degrees. He is temporarily staying in a hotel, and he said a police officer in the building told him he wasn't even welcome in his own apartment. Another resident, Lynda Brooks, got a reading of 80 degrees on her thermostat.

Many of those who attended the rally had heard about the situation in the media over the summer. “I've been hearing about this on the radio too long,” explained one woman, who said she left work after a 10-hour shift to “do something about this.”

One prominent attendee was State Senator Vincent Fort, the Democratic majority whip and a staple of the state's progressive community. Fort has long been an ally of the grassroots left in the state, even going so far as getting arrested in Medicaid protests last year.

Fort, as well as numerous other speakers at the event, spoke to the religious commitments of the demonstrators, as opposed to the overt religiosity but poor ethics of FBC. “Anytime you stand up for people who can't stand up for themselves, you're doing God's work,” he said.

Boazman, Fort and the others standing with the residents that day plan to escalate their actions. Their next target is Glass Ratner, the property management firm that is in charge of day-to-day operations at Friendship Tower. Fort and others said they are prepared to be arrested on the premises to draw attention to the plight of the senior residents.

The senator explained that the fundamental issue goes far beyond air conditioning: “This is not about A/C. You need to know that. This is about money. Who got it, and who don't.”

This speaks to the dynamics at play at Friendship Tower. At one point, a speaker affiliated with the Nation of Islam told the audience, “This isn't the Caucasian holdin' us back here today. It's people who look like us.”

What's happening at Friendship Tower is what the class war looks like in the 21st century. Race, gender and religious background are not the dividing lines between the senior citizens in this apartment complex and the prominent church that owns their property. The divide is over raw access to money, and the power it brings. As Senator Fort noted, FBC, having just received nearly $20 million to sell its property, is awash in cash. The church has played its role in the South's African American history, but has also hosted the well-to-do of the community, such as its former pastor Reverend William Guy, whose daughter Jasmine Guy is a TV star.

There are no television stars or prominent political donors living at Friendship Tower, just low-income seniors, struggling against a political and economic system that doesn't value their lives because they simply don't have the dollars to make them care.

As debates over things like race, gender and sexual orientation dominate national media discussion, cases like Friendship Tower are swept under the rug. Talking about raw power among different economic classes is a sort of irreverence you rarely find on cable television or in the major newspapers, but it is a power differential that increasingly defines America's greatest and most persistent form of inequality. Rest assured, the seniors at Friendship Tower won't be the last ones who suffer from it; if we ignore their plight, the rest of us will be next.