Jeff Bezos, Orwellian overlord: Why his defense of Amazon's "bruising" workplace culture is so hard to swallow 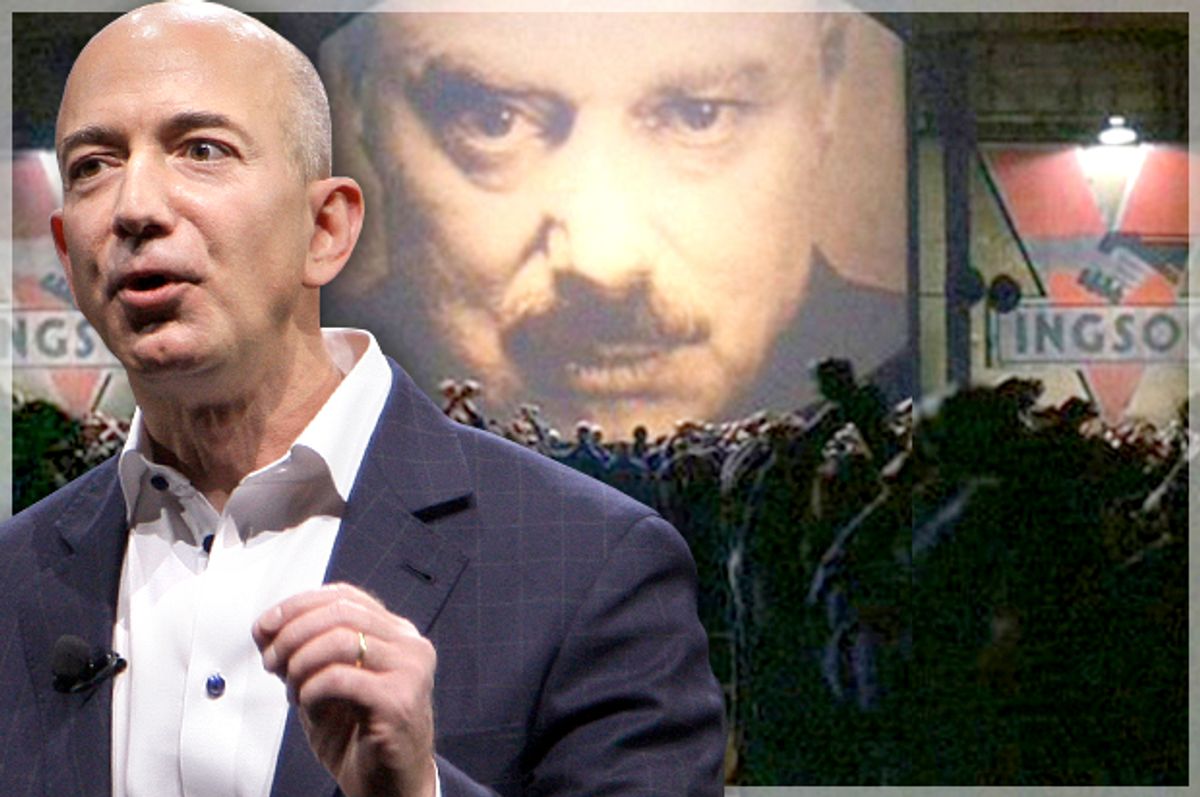 Employees crying at their desks. Repeated all-nighters. Workers pushed out when they had medical problems or family emergencies. Annual firings deemed “purposeful Darwinism.” According to one former employee, it became corporate lore that “Amazon is where overachievers go to feel bad about themselves.”

It was only a matter of time before a news organization with serious reporting resources penetrated the workplace culture of the online retailer. By now, critiques of what Amazon has done to bookstores and authors, or the way it treated its warehouse workers (remember that Pennsylvania hothouse with the ambulances on call?), are familiar. Brad Stone’s 2013 book, “The Everything Store,” is full of detail.

But in Sunday’s New York Times, “Amazon’s Bruising, Thrilling Workplace” looks at the expectations that white-collar workers in the company’s Seattle flagship office in a way readers haven’t seen before. Reporters Jodi Kantor and David Streitfeld spoke to more than 100 current and former employees, and despite incomplete cooperation from the corporation itself – founder Jeff Bezos and Amazon’s top brass refused to be interviewed – the resulting story is both balanced and damning. In some ways, the story gets at what we’ve suspected about the heartless, workaholic, algorithm-worshipping style of tech corporations, but this goes further.

Perhaps the most chilling detail in “Amazon’s Bruising, Thrilling Workplace” came from its description of the “Anytime Feedback Tool, the widget in the company directory that allows employees to send praise or criticism about colleagues to management.”

A flack defends it as no big deal, but "many workers called it a river of intrigue and scheming":

They described making quiet pacts with colleagues to bury the same person at once, or to praise one another lavishly. Many others… described feeling sabotaged by negative comments from unidentified colleagues with whom they could not argue. In some cases, the criticism was copied directly into their performance reviews — a move that Amy Michaels, the former Kindle manager, said that colleagues called “the full paste.”

It sounds like something from dystopian literature, whether “1984” or Dave Eggers’ Silicon Valley novel, “The Circle.” And it also makes any denial current employees could offer difficult to take seriously. If everyone is being watched all the time, and employees are regularly “culled,” what are the chances of anyone speaking honestly?

Those denials are starting to arrive right on schedule. Bezos – who almost never responds publicly to criticism -- says in a memo to his staff that he doesn’t recognize the corporation the Times described:

The article doesn’t describe the Amazon I know or the caring Amazonians I work with every day. But if you know of any stories like those reported, I want you to escalate to HR. You can also email me directly at jeff@amazon.com. Even if it’s rare or isolated, our tolerance for any such lack of empathy needs to be zero… Hopefully, you’re having fun working with a bunch of brilliant teammates, helping invent the future, and laughing along the way.

The stranger bit of damage control came from Amazon’s head of infrastructure development, Nick Ciubotariu, who wrote a long, impassioned defense on LinkedIn. He repeatedly asserts that he was not asked to defend the company.

But I’m not going to stand idly by as a horribly misinformed piece of “journalism” slanders my company in public without merit. I don't have the data to discuss the past - so I won't. However, so much that is written here is deliberately painted to match current reality, and it does not, even by a stretch of the imagination. That is not responsible journalism - that's a hatchet piece. So let's correct that, starting now.

Despite the cries from Amazon employees, this was not a hit piece. “Thanks in part to its ability to extract the most from employees, Amazon is stronger than ever,” the story says. “Its swelling campus is transforming a swath of this city, a 10-million-square-foot bet that tens of thousands of new workers will be able to sell everything to everyone everywhere.” Current Amazon employees talk about all the “innovation” and “thinking big” they produce and how all the “data is incredibly liberating.”

Do Amazon’s defenders think the Times just made all the other stuff up?

Maybe Ciubotariu loves working for Amazon and means every word he says. But it’s hard to know how to read his testimonial now that we hear about the weird feedback policy.

Luckily, there are people who know how Amazon works who are willing to speak about it. That doesn’t just mean disgruntled former employees, but writers whose wares are peddled online. Especially since Amazon’s dispute with Hachette, numerous authors have been critical of the retailer, calling it a bully that uses its muscle to push publishers around.

The latest to complain is John Green – the YA super star behind “The Fault in Our Stars” – who tweeted, after reading the Times story, that he was canceling his Prime membership. “Worst cult ever,” he called the corporation.

Will Green’s frustration cause large numbers of people to turn on Amazon and force the company to be more humane? Despite an enormous amount of criticism, the retailer is now bigger than ever – as of this summer, larger than Walmart – so it seems more likely that rather than the rest of changing Amazon, Amazon will change us.

The Anytime Feedback Tool, for instance, may crawl out of Seattle like an alien lifeform fallen to earth. As the Times puts it:

Soon the tool, or something close, may be found in many more offices. Workday, a human resources software company, makes a similar product called Collaborative Anytime Feedback that promises to turn the annual performance review into a daily event.

An early investor, it turns out, was a guy named Jeff Bezos.