Donald Trump is a professional wrestler: How the billionaire body-slammed GOP politics

Pundits have been confounded by the Donald at every turn, because the secret to his appeal resides not in politics 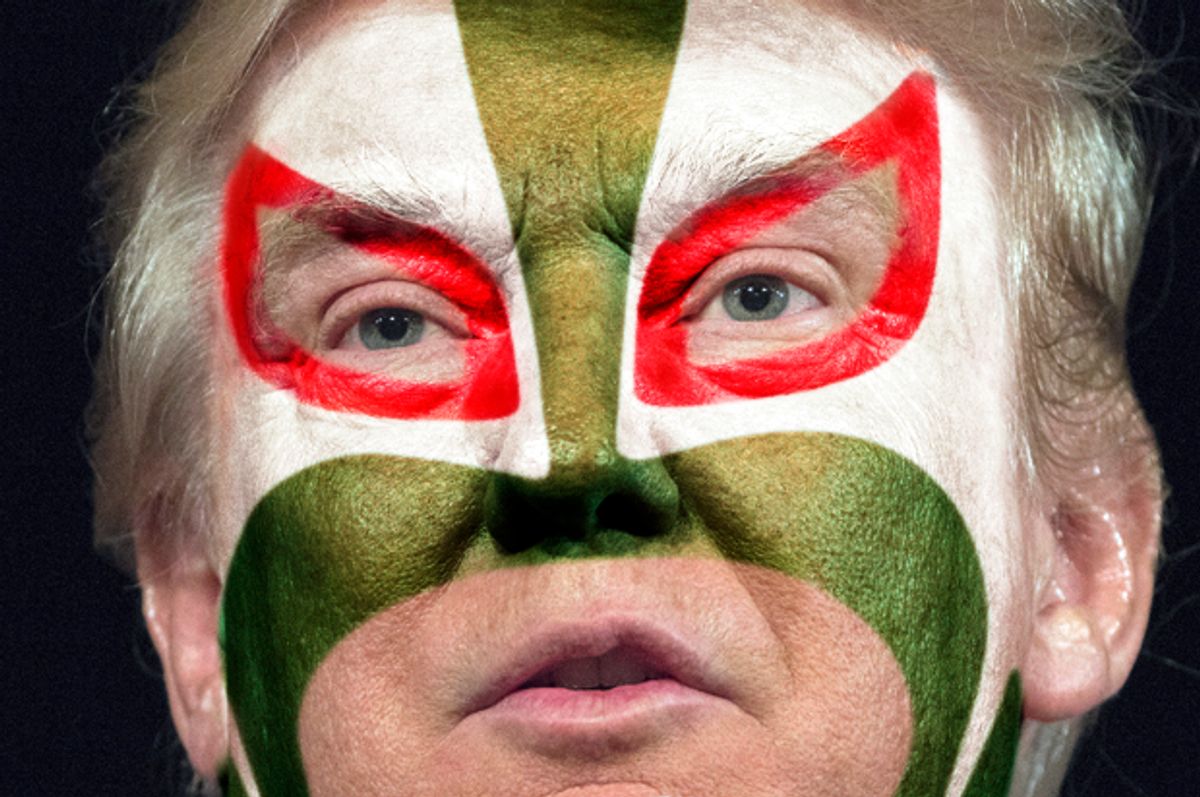 The first thing you should know about me is that I am an unapologetic fan of professional wrestling -- of its outsize characters and operatic storylines, of its physical feats of strength and skill that even the biggest cynic, if they were honest, would have to grudgingly respect. While the sport's biggest stage, that of World Wrestling Entertainment, is often puerile and retrograde in its presentation, even that entertainment powerhouse is capable of staging moments of transcendent spectacle.

I'm not alone in these affections, either: Donald Trump, the current Republican primary frontrunner, bomb thrower and nativist iconoclast, is an avid fan and student of pro wrestling, and a close friend and business associate of Vince McMahon, the owner and CEO of World Wrestling Entertainment.

Trump’s casinos have played host to two of the biggest events in WWE history, Wrestlemanias IV & V. He's a member of the WWE Hall of Fame. He even went so far as to perform at Wrestlemania 23, appearing ringside for a match dubbed -- wait for it -- "The Battle of the Billionaires."

Of course, most Americans are probably now most likely to associate Trump with his maddening and ridiculous, yet unexpectedly ascendant, campaign for president. And yet, believe it or not, his time spent in the world of professional wrestling is invaluable for understanding the path he has cut through the GOP primary field -- because the playbook employed by Trump over the past several months bears an uncanny resemblance to the storytelling and character-building stratagem of professional wrestling. One could even be forgiven for concluding that Trump is directly calling on his knowledge and love of the performance art to create one of the most captivating -- and entertaining -- political stories of recent vintage.

To understand why, we first need to establish a few key concepts.

As a function of their origins in the classic dramatic form, the storylines in American professional wrestling revolve around the tension between a hero (a "babyface," in industry parlance, or "face" for short) and a villain (known primarily as the "heel"). In its most basic presentation, the babyface is a likable and honest character who wants to win the approval of the fans. He or she is an empathetic figure, one who remains stalwart and determined in their battles against a relentless opposition and overwhelming odds. The current standard bearer of the WWE, John Cena, is a consummate babyface -- touting the all-American values of "Hustle, Loyalty, Respect," and showing unqualified deference to the fans who make up the "WWE Universe." The heel, meanwhile, is the opposite of the face -- a duplicitous, unethical, often cowardly figure, who will cheat to win and who actively antagonizes the fans and his peers. The current champion of the WWE, Seth Rollins, is a quintessential "chickenshit" heel, a craven and bombastic figure who, in spite of his dazzling in-ring skill set and frequent bravura performances, appears incapable of winning big matches "clean," often requiring outside interference in order to maintain his grip on the championship.

It's not hard to see how these roles translate into the world of politics. Narrative-building, whether in politics or in wrestling, both affect the structure and conventions of dramatic spectacle, wherein the depictions of conflict are engineered to magnify the intended emotional response in spectators. Any campaign's primary motivation is to elevate its own candidate -- to play the part of a babyface -- while convincingly depicting its opponent as the heel.

To use the recent example of the 2012 presidential election, the Mitt Romney campaign, with an assist from Fox News, did its best to present the Republican candidate as a babyface -- the veteran businessman with a record of rescuing companies in distress, who could navigate America to a brighter future in the role of its chief executive. However, Romney was undermined by his own heelish tendencies, his patrician attitude and disconnectedness from the middle class experience, not to mention his actual record in private equity. The now-infamous "47 percent" video (what wrestling aficionados would call a "shoot promo," an unscripted speech that makes visible the artificiality of the spectacle) was his ultimate undoing, revealing as it did the apparent insincerity at the heart of his campaign's message.

So there is the basic storytelling architecture: There is a face, and there is a heel, a good guy and a bad guy. Over time, alignments change: Good guys go bad, and bad guys become good. But there is always one of each, and these distinctions are meant to be crystal clear.

In his seminal essay on professional wrestling, Roland Barthes took special attention to performance of the heel archetype, which he describes as the "bastard," about which he wrote the following:

Each sign in wrestling is [...] endowed with an absolute clarity, since one must always understand everything on the spot. As soon as the adversaries are in the ring, the public is overwhelmed with the obviousness of the roles. As in the theatre, each physical type expresses to excess the part which has been assigned to the contestant. Thauvin, a fifty-year-old with an obese and sagging body, whose type of asexual hideousness always inspires feminine nicknames, displays in his flesh the characters of baseness, for his part is to represent what, in the classical concept of the salaud, the 'bastard' (the key-concept of any wrestling-match), appears as organically repugnant. The nausea voluntarily provoked by Thauvin shows therefore a very extended use of signs: not only is ugliness used here in order to signify baseness, but in addition ugliness is wholly gathered into a particularly repulsive quality of matter: the pallid collapse of dead flesh (the public calls Thauvin la barbaque, 'stinking meat'), so that the passionate condemnation of the crowd no longer stems from its judgment, but instead from the very depth of its humours. It will thereafter let itself be frenetically embroiled in an idea of Thauvin which will conform entirely with this physical origin: his actions will perfectly correspond to the essential viscosity of his personage.

The ultimate goal of a successful professional wrestler is to elicit an emotional response from the audience. Heels want to be booed and hated. Faces want approval and cheers. They are both masters of manipulation and psychology, taking the audience on an emotional journey of highs and lows.

However, as the storytelling formula of professional wrestling has morphed over time, it has expanded to include antiheroes and other characters who do not fit neatly into a simple binary of good or bad. (These figures are sometimes called "tweeners.") Heroes can sometimes act like bullies, straining our allegiance. And villains who consistently entertain crowds can come to command more respect and admiration than their benevolent counterparts, even in spite of behavior that could be characterized, from a normative standpoint, as contemptible.

What happens then, when the villain, because of their charisma, speaking ability, physical talent, or some intangible becomes popular with wrestling fans? What if the villain receives more cheers than the hero?

This brings us again to Donald Trump, because this is the exact situation that the Fox News media machine faces with the billionaire candidate. They gave him the spotlight, what is called a “monster push” in professional wrestling, and built him up as a hero. While it's unlikely that the network would ever have considered him a viable candidate for president, in the early days of the campaign Trump was invaluable, in particular for his ability to channel the aggrieved right-wing populism that has infected the Republican voting base. Thus he was built up as a hero, as a babyface -- until, that is, it became clear what a threat he was to do real damage to the establishment's preferred candidates.

That was the state of play when, at the first GOP debate earlier this month, Fox News's panel of debate moderators, including Megyn Kelly, made a concerted effort to take Trump down a peg -- to turn him heel, for all intents and purposes.

We all know how that turned out.

One of the greatest fears of a professional wrestling owner or promoter -- the person ultimately responsible for "booking" storylines and shaping the narrative direction of the company -- has traditionally been that a champion would go AWOL, and make the choice to not lose a title match when instructed. This could potentially create mayhem. The role of a champion -- especially one who is a villain such as Donald Trump -- is to ultimately to lose to a challenger, thus anointing them as the new figure for the fans to support (or alternatively to hate). But instead of accepting the fact that his political career is a creation of the Fox News echo chamber, Donald Trump, at least to this point, seems to actually believe that he is a viable candidate for presidency in 2016. Fox News tried to “bury” Donald Trump earlier this month. And as has happened in professional wrestling on many occasions, this actually made Donald Trump even more popular among movement conservatives and other extreme right-wing elements.

Somewhere along the way, the Fox News media machine forgot to let Donald Trump know that his so-called candidacy was all a “work,” a type of fictional dramatic performance intended ultimately to "put over" someone else.

This episode reveals the greatest peril in the creation of a spectacle. Whether you're a wrestling promoter or a power broker, Vince McMahon or Roger Ailes, your power to dictate the narrative can only ever take you as far the audience will allow. In the meta-narratives of both wrestling and politics -- in the behind-the-scenes machinations that result, in the public eye, in a particular outcome -- there is an very particular element of hubris.

A heel has the power to captivate audiences; such is the seductive pull of transgression. Having understood this particular ability in Trump, but also the ultimate desired outcome of the Republican nominating contest -- namely, a nominee that is not Trump -- shouldn't Roger Ailes have known better than to push him on audiences as a brash truth-teller? Did he really think he could control someone like that? (Especially given the lather into which the conservative base has been worked over the past half-decade, in particular by Fox News.)

In wrestling and politics both, you reap what you sow. If you're a wrestling promoter, the solution to this conundrum is simply to change a popular villain's alignment, make them into a babyface, piggybacking off their success in order to make it your own. But if you're Roger Ailes, faced with the prospect of Donald Trump as a dominant force in Republican politics, is that really a solution you're willing to brook? Are you comfortable making him your hero in a general election? This is the impossible situation into which Fox News and the Republican Party have navigated themselves.

Media pundits have been caught off guard by the resiliency of the Trump campaign, seemingly impervious as it is to the traditional rules of play. But maybe they shouldn't have been. If the commentariat wants to make sense of Donald Trump’s apparent political madness, all they need to do is watch professional wrestling.