Donald Trump's nativist police state: What "we have to keep the families together" really means

Don't sugarcoat Trump's plan because it makes no sense: He wants to deport the U.S.-born kids of the undocumented 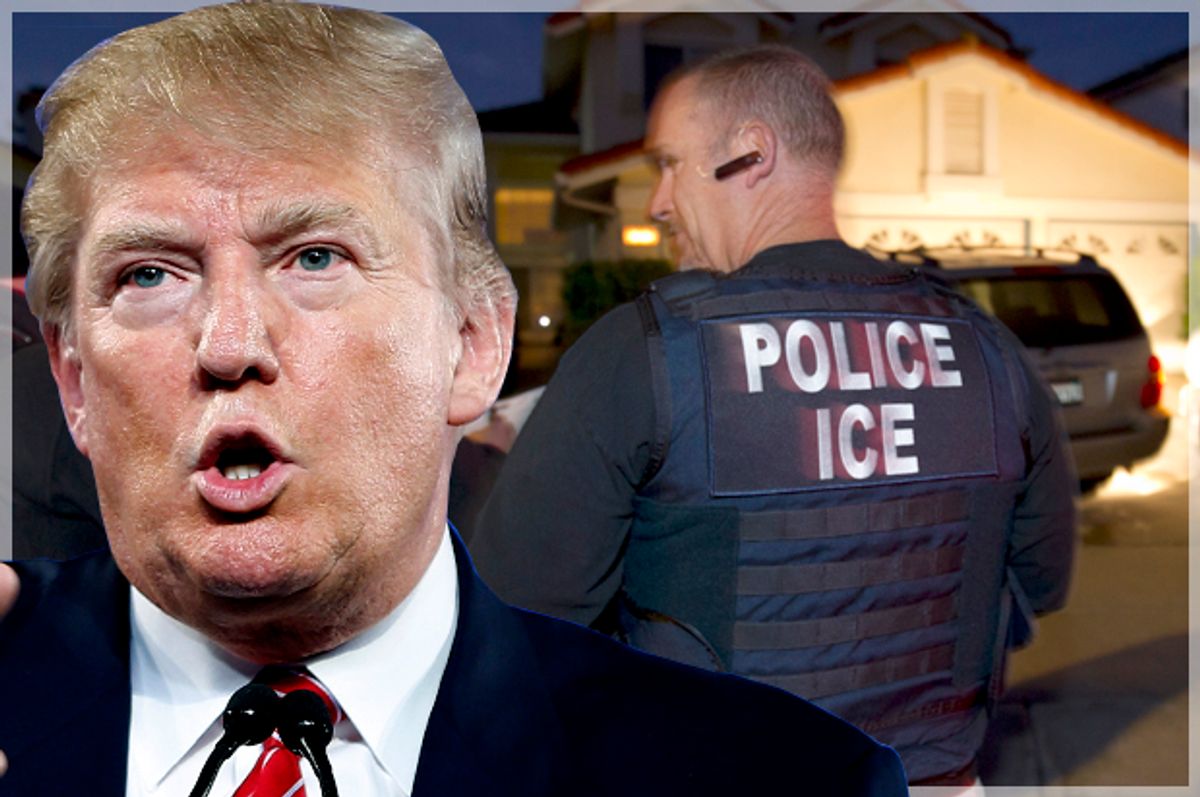 To honor Julian Bond, the civil rights hero we lost this weekend, I didn’t watch Donald Trump on the Sunday shows. I read Ari Berman’s excellent “Give Us the Ballot” instead (more on that later this week, I hope.) But it’s Monday morning and I can’t continue to look away. Trump’s heralded "policy conversation" with Chuck Todd is a Trumpean mess of bluster, ignorance and contradiction, but we learned a few things.

The most important is that Trump would create a massive police state in order to deport all of the 11 million immigrants who are here illegally – along with 4 million of their children who were born here. When Todd asked if he really intended to separate families, Trump said no: "Chuck. No. No. We’re going to keep the families together, we have to keep the families together. But they have to go."

But how would you keep families together whose children are U.S. citizens? Vox’s Dara Lind scrupulously gives Trump the benefit of the doubt about what he’d do with kids who were born here, in her smart piece “The horrible contradiction at the heart of Donald Trump’s immigration plan.” Since it would be difficult, if not impossible, to throw them out of the country, Lind suggests it’s not clear that’s what he means. Hence there’s a “contradiction at the heart of” his plan.

I think she’s being a little too fair and balanced there. Just because something’s impossible and probably illegal doesn’t mean Trump can’t support it. I think it’s pretty clear, because later in the interview he comes out against birthright citizenship for the children of immigrants born in the U.S. – the so-called “anchor babies” nativists believe illegal immigrants travel here to increase their chances of staying. "What they're doing: They're having a baby. And all of a sudden, nobody knows ... the baby's here," Trump said. He souned like he intends to round up those kids too and “keep the families together.” But they all “have to go.”

Never mind that he can't do that. While there have periodically been proposals to end the practice of birthright citizenship in Congress, they don’t go anywhere, and most experts believe such a law would violate the 14th amendment, anyway. Thus the only reliable way to make Trump’s dream reality would be a constitutional amendment. Barriers like that might stop ordinary men, but Trump is extraordinary. It’s also hard to imagine that even a constitutional amendment could strip someone’s citizenship retroactively. But that’s only because my imagination is limited. Unlike Trump’s.

Yes, this is crazy, and it would create something like a police state, for a time anyway. Trump’s hastily released immigration plan, heavily influenced by nativist hardliner Sen. Jeff Sessions, calls for tripling ICE officers, from the current 5,000 to 15,000, and mandating that they work closely with local police departments to identify and round up undocumented individuals and their families. He’ll immediately rescind President Obama’s executive orders deferring action on young people who came to the country with their parents when they were small – the DREAMers -- as well as the parents of DREAMers and of children who were born here.” They all “have to go,” Trump says.

Naturally he won’t even take a stab at the cost of his nativist police state. Let’s leave aside his fantasy of a border wall, which he insists he’ll make Mexico pay for. The Center for American Progress estimates it would cost $200 billion over five years to find, detain, legally process and transport 11 million undocumented immigrants. Add in their 4 million children who were born here, and the cost jumps by at least a third.

So yes, Trump’s plan is nonsense and should disqualify him from serious consideration as a presidential candidate. But of course, it won’t. The working class white voters who are a cornerstone of his base want relief from the downward wage pressure and erosion of the manufacturing sector that’s been crushing them since the 1970s. They don’t understand that guys like Trump are responsible for their plight, not their champions, and I despair of what it will take to convince them.