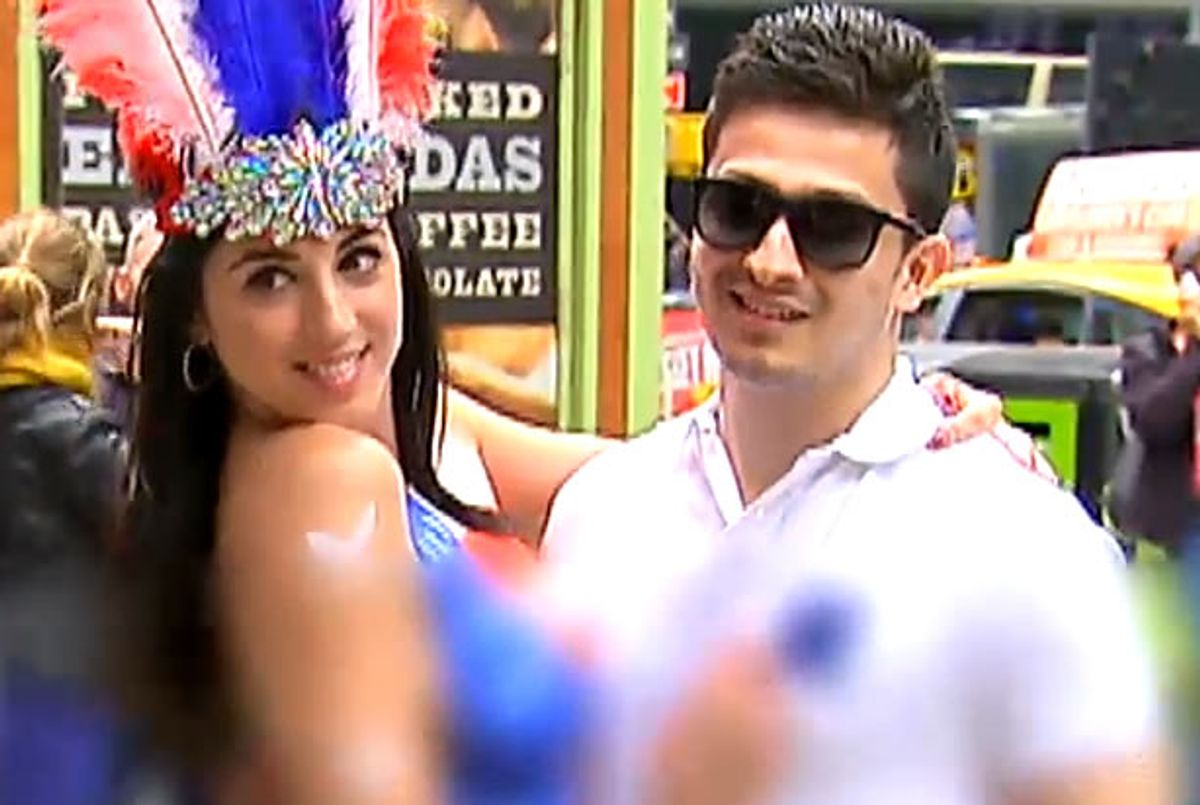 As if Elisabeth Hasselbeck wasn't having enough trouble trying to figure out whether the birds go in the bees or vice versa today, the "Fox & Friends" production team saddled her with the show's closing "Fox Flash" segment.

Fox News' Sean Hannity has a well-documented, long-standing tendency to condemn Spring Break on location, in Florida, where he and his crew can take weeks' worth of B-roll of intoxicated underage or barely legal women wearing little more than their inhibitions. It's a yearly pilgrimage that demonstrates the fundamentally conflicted nature of the old white perverts who watch Fox News.

The "Fox Flash" segment on Monday concerned the "desnudas" of Times Square, women of mostly Latin American origin who walk around "topless" and pose for pictures with tourist. "Topless" is in scare-quotes 1) because they're not topless, they're wearing red, white, and blue body paint, and 2) even if they were, it would be perfectly legal according to city statutes.

"It drives me crazy when at Times Square you see the naked people there covered in body paint as an expression of art," Police Commissioner William J. Bratton told the Times, but "we've researched that top to bottom and we cannot find any law that allows us to interfere with that freedom of expression reflected through art form."

What's interesting about the "Fox Flash" segment is that it's clearly another instantiation of the network's desire to appeal to their demographic, only this time via a veritable Matryoshka doll of non-nudity. The denudas aren't technically nude, they should be able to roll unadulterated footage of them walking around Times Square. Except if they did that, the desnudas wouldn't appear "naked enough" -- given that they're not naked at all -- so the network blurs out the women's non-bare breasts in order to make them appear naked, so as to better titillate their target audience, which is of course deeply offended by these young women's immorality.

In effect, Fox News manufactured nudity where none previously existed, then covered it up in order to excite its outraged audience. Being that conflicted about the image of the female body may be why Fox News' audience is so Islamophobic -- encountering radical Islam must be like looking in a mirror and seeing their own misogyny staring right back at them.

Watch all 23 seconds of the "Fox Flash" below via Fox News.