The economy has improved greatly since 2009, but to listen to a Republican, we're living in a wasteland 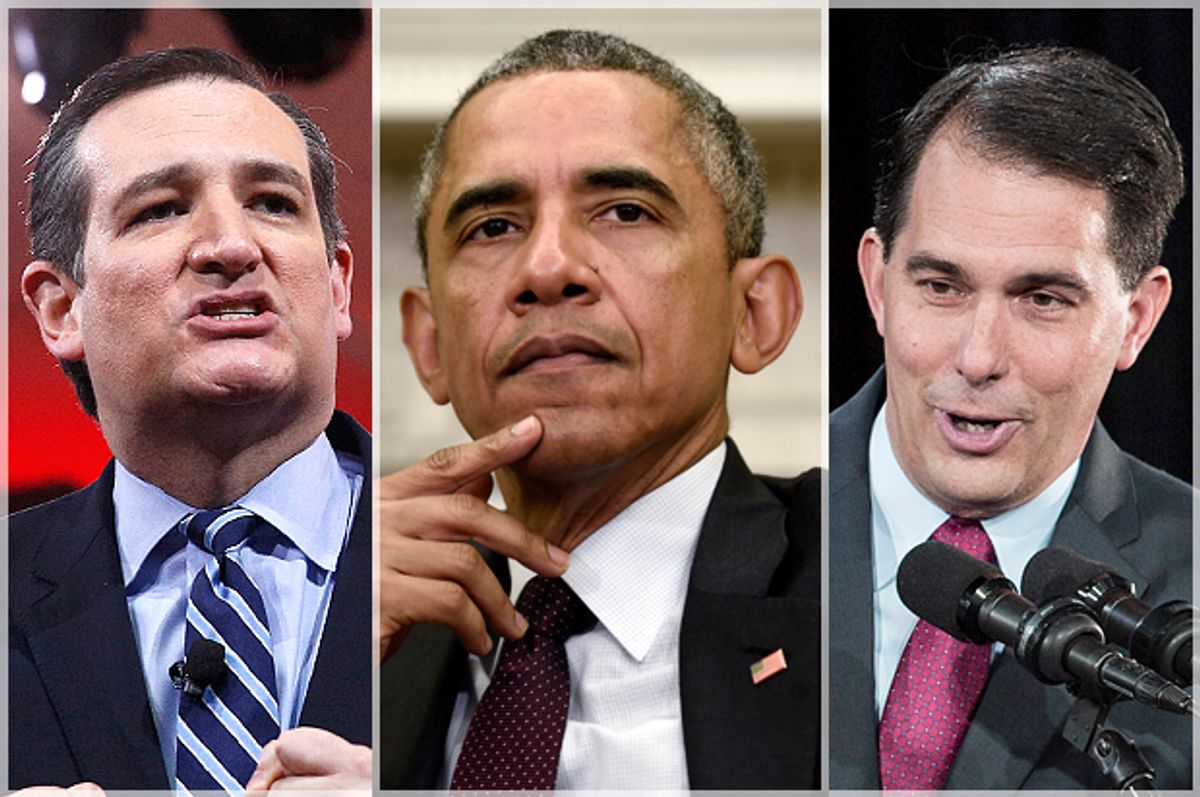 There's a super-colossal disconnect between how drastically the economy has improved since 2009 and how that improvement is discussed by congressional Republicans and the GOP presidential candidates. The usual suspects continue to praise the Reagan economic record, while likening Obama to the so-called "malaise days" of Jimmy Carter, as Rush Limbaugh did recently -- clearly because his zingers are so damn timely.

Part of the disconnect has to do with the White House's ongoing inability to get the word out about how vastly improved the economy has been since the deepest recession since the Great Depression, which Obama and the Democrats were almost entirely responsible for ameliorating. However, the most obvious reason for the public's lack of understanding about our current state of economic stability and steady growth has to do with the only thing the Republicans are capable of successfully doing these days, which is marketing their bumper sticker slogans and engaging in coordinated disinformation campaigns.

For instance, the GOP disinformation machine is the primary reason why 53 percent of Americans view Obamacare unfavorably even though, (1) it only impacts a very small percentage of Americans, 70 percent of whom love Obamacare, and (2) most Americans actually support the individual aspects of Obamacare by near-supermajority margins. (This is especially true in Mitch McConnell’s Kentucky.)

Fox News Channel and AM talk radio for the win.

Ted Cruz is perhaps the most vocal congressional opponent of Obamacare, yet he announced he was signing up for a health insurance policy through an Obamacare marketplace. Why risk attaching his name to Obamacare when he could easily sign up directly through an insurer or pay out of pocket to keep his wife's Goldman-Sachs policy? Obviously because it's the best deal, since members of Congress have always enjoyed a premium-sharing benefit from the government. Thanks, Obama.

Meanwhile, one-percenters Jeb Bush, Donald Trump and Dr. Ben Carson have absolutely prospered under the Obama economy, and the lives of millions of Americans have improved dramatically given the economic hellscape at the end of the previous administration. Nevertheless, let's review what several of the Republican frontrunners have said about the Obama economic record:

"Barack Obama's policies have given us a zombie economy where no matter what else happens, most Americans are falling behind."

"Workforce participation has to rise from its all-time modern lows. It means that people need to work longer hours and, through their productivity, gain more income for their families. That’s the only way we are going to get out of this rut that we’re in."

"Bright spots in the Obama economy are few and far between, as opportunities for small businesses and entrepreneurs are often quashed by a federal government that has grown too large, powerful and pervasive."

Indeed, many of leading economic indicators are looking quite good -- even when compared with the Reagan economy, which all of the above candidates can't wait to embrace.

"Many of these people buy -- hook, line and sinker -- the idea that our economy is getting much better and that the unemployment rate is down to 5.5 percent." [...] "[W]hat you have to know is that you can make the unemployment rate anything you want it to be based on what numbers you include and what numbers you exclude. You have to look at the labor force participation rate."

That's some serious leaning on the jolly, candy-like panic button. But contrary to the Republican fear-mongering on this issue, the actual economic numbers look much, much better. Better in many cases than those of Saint Reagan.

The latest jobs report showed that job creation held steady above 215,000 for July, 2015. And Ben Carson's silly conspiracy theory aside, unemployment continues to fall, dropping to 5.3 percent, down from around 10 percent at its peak.

Contrast this with Reagan's record at this stage of his presidency. As Paul Krugman pointed out last week, Reagan's unemployment numbers peaked higher (around 11 percent) than Obama's high-water mark, and Obama's 5.3 percent unemployment figure in his sixth year has bested Reagan by a full year. In Reagan's sixth year, unemployment was still in the low sevens.

Now, Republicans might cite the recent decline in the labor participation rate (briefly, the number of people looking for work).Bob Deitrick, CEO of Polaris Financial Partners explained that while Reagan's jobs numbers benefited from an active baby-boomer generation, Obama's poor participation numbers can be explained in part by the massive influx of retiring baby-boomers. Deitrick:

What’s now clear is that the Obama administration policies have outperformed the Reagan administration policies for job creation and unemployment reduction. Even though Reagan had the benefit of a growing Boomer class to ignite economic growth, while Obama has been forced to deal with a retiring workforce developing special needs. During the eight years preceding Obama there was a net reduction in jobs in America. We now are rapidly moving toward higher, sustainable jobs growth.

Notice that when you hear the Republicans screeching about the "labor participation rate" (see Jeb Bush above), they never mention the massive influx of retiring baby boomers leaving the workforce. Convenient.

We can't really gripe about America "not making anything anymore." For the longest time, we've watched as manufacturing jobs were moved overseas to exploit cheaper labor. But during the Obama administration, Institute for Supply Management's Purchasing Managers Index reported, there's been 74 consecutive months of economic expansion, and 31 consecutive months of growth in the manufacturing sector.

You'll never hear anything about this from the GOP. Someone should ask them about this -- perhaps during a nationally televised debate.

Given how Reagan did have to contend with, again, the greatest recession since the Great Depression and a bottomless crash of the stock market, this chart should blow your mind.

During the Reagan years, your investments grew by 190 percent. That's a lot. Under Obama, however, the same dollar has yielded a 220 percent gain. That's a lot more. If you own shares in the company you work for, you're probably doing better. If you have a 401(k), you're probably doing much better. If you have an IRA, you're doing great. Overall, Dow has reached record highs under Obama -- over 17,400 -- not too shabby for a guy whose economic policies were considered to be the arrival of European socialism, or worse.

Call me a blasphemer, but Reagan was comparatively terrible on government growth and spending, two areas where conservatism is supposed to rule the day. Reagan famously declared, "Government is the problem," vowing to reduce the size of government. Sorry. He really didn't. The deficit doubled and the debt tripled.

Under Obama, the budget deficit has declined by more than a trillion dollars, according to the not-liberal Wall Street Journal. I repeat: the federal budget deficit has gone from $1.4 trillion when Obama took office to around $300 billion. And while government employment increased under Reagan, literally expanding the size of government, it's declined under Obama, much to the detriment of his overall employment numbers.

While we're here, we should nip something in the bud. Yes, Congress "controls the purse strings," and, no, "the president doesn't create jobs." But if you're going to credit Reagan or Clinton or whomever with the deficit or economic growth, then you have to credit Obama for the same. Likewise, if you're going to criticize Obama because you perceive a weak economy, then you have to give him credit when it's strong. You can't have it both ways. You can't blame him for a bad economy, then suggest improvements are the result of actions by someone else. Well, I suppose you can do that, but you're going to sound silly.

Also, chew on this. A Democratic House during the 1980s, and its speaker Tip O'Neill, passed all of the spending bills during the Reagan years. As we all know, spending bills have to be signed into law by the president. So, then, which president signed all of those tax-and-spend liberal bills into law, ballooning the deficit and debt? Hint: not Obama.

Along those lines, it's easy to stimulate huge economic growth via limitless deficit spending. Hence, the Reagan economy. Conversely, deficit spending has dropped precipitously under Obama and yet, 1) he's not being given fair credit for it, and 2) the economy continues to expand anyway -- the stock market is booming and unemployment is falling. This speaks volumes about the Obama record versus the gilded Reagan record. It also hints to the shift in economic policy between the parties. The Democrats are slowly embracing lower spending, while the Republicans are embracing increased spending on unnecessary wars and tax cuts. Republicans, especially under Reagan and George W. Bush, don't seem to mind swiping our national credit card down to a worthless nub. But you'll never hear this from Trump and the rest, who can't stop proverbially humping Reagan's leg while lying about Obama's truly noteworthy economic record.