Preventing movie theater gun violence: Why extra security — even if we're willing to pay for it — isn't the answer

We need to pay attention to the larger crisis, and fund efforts to fight it accordingly 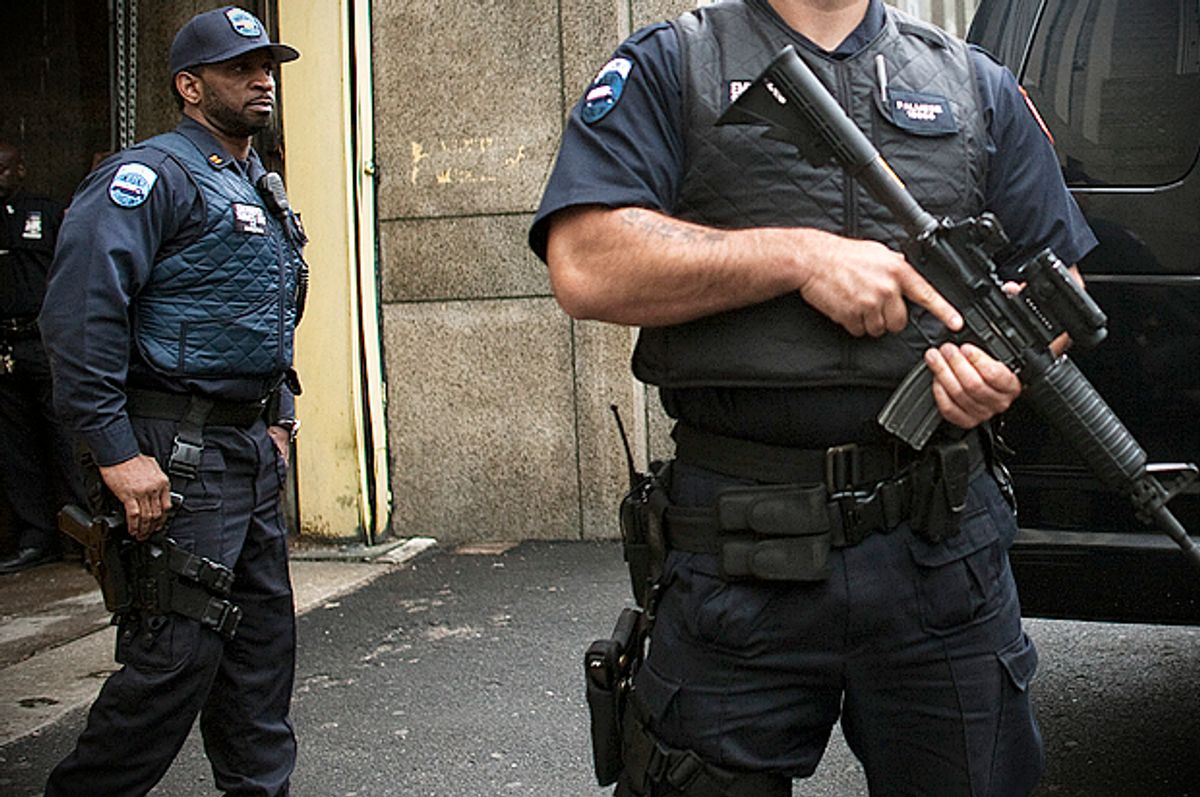 If you’re afraid of violence when you head to the cinema these days, you’re not alone. Not only have there been several real shootings, but the idea of cinema violence is clearly in people’s minds even when it doesn’t happen: CNN was so shocked that screenings of “Straight Outta Compton” involved people peaceably buying tickets and not firing guns at each other that it provoked a report full of bad assumptions and an ensuing backlash:

So many Americans are afraid of a movie-theater shooting, in fact, that nearly half of us, apparently, are willing to pay more for tickets to get a safer cinema with metal detectors and armed security guards. Variety reports on the new poll by the company C4:

The report comes after a gunman killed two patrons and himself during a July 23 showing of “Trainwreck” in Lafayette, La., and follows an August 5 attack during a Nashville, Tenn., showing of “Mad Max: Fury Road” that left a hatchet and pellet gun-wielding assailant dead. These killings come nearly three years after a gunman in Aurora, Colo., murdered 12 people at a screening of “The Dark Knight Rises.”

It’s worth noting that enthusiasm for funding cinema security starts to drop after it hits the one-dollar mark; numbers are under 20 percent for those willing to spend $3 per ticket. In any case, these figure are likely to go up if cinema shootings become as familiar an occurrence as school shootings.

But it has me wondering: Instead of spending money to put a band-aid on the gun-violence problem, how about we try to take care of the source of the crisis? To try to limit a shooting at each screening at every movie theater – and ignoring the big picture – is a bit like getting really good air conditioning for your house instead of trying to do something about climate change. Sure, this kind of consumer-driven privatization works in the short term, especially for those with the money to deal with it, but it does nothing at the root.

So let’s say every ticket included a fee designed to limit gun violence. Last year saw about 1.26 billion tickets sold in North America. What if even half of those people – through a fee or donation or whatever -- gave some money to combatting the scourge of public shootings?

I’ll leave the details to policy wonks and members of the anti-violence movement —Amy Schumer, whose film "Trainwreck" was playing in the Louisiana theater where a man killed two women and wounded nine in June, recently joined her cousin Sen. Chuck Schumer in the unveiling of a new gun control bill designed to tighten regulations around gun sales and mental health that includes financial incentives for states that comply. That billion or half-billion or whatever could be spent on several measures that could keep guns out of the hands of people likely to misuse them. That includes mental health screening, an idea the political right has come to endorse, without explaining where the money will come from. It could also include building a stable and well-funded counterweight to the NRA – a group that could defend politicians who are railroaded for supporting sensible regulation.

“Ideally,” a Rolling Stone story argues, “gun-control advocates would meet the NRA with a national, big-tent, big-money-and-grassroots organization all their own.” But most gun-control groups (“groups centered on mayors, mothers, and martyrs”) are small and isolated from each other. Tim Dickinson continues:

All of these organizations are well intentioned and the gun control movement is unquestionably stronger for their existence. But they are insufficient, duplicative, and in many ways self-limiting. America has a catastrophic crisis of gun violence, with 30,000 dying every year. This is a problem that transcends mayors who must contend with urban shootings and illegal handguns. It is bigger than the moral outrage of mothers. And it's not going to be solved by center-right politicos who came to Jesus on gun-control after getting shot.

Even better, some of this money could go toward supporting an alternative to the NRA for people who use guns responsibly – people in the elusive middle who want to hunt safely but understand the role of regulation and limits.

In an era of privatization and cynicism about coordinated or government action, some of this will be a tough sell.

The notion of walking into a movie and being confronted with a killer is scary indeed, and I get why people are willing to be frisked so they don’t have to risk it. But the idea that we’ve simply given up trying to solve the larger crisis -- which includes pushing back against the gun lobby whose efforts allow those guns to circulate -- is just as frightening.