The ballad of Bernie & Donald: How two unorthodox candidates caught fire — because Americans are mad as hell

Trying to make sense of the rise of Sanders and Trump? Look no further than the sorry state of the American dream 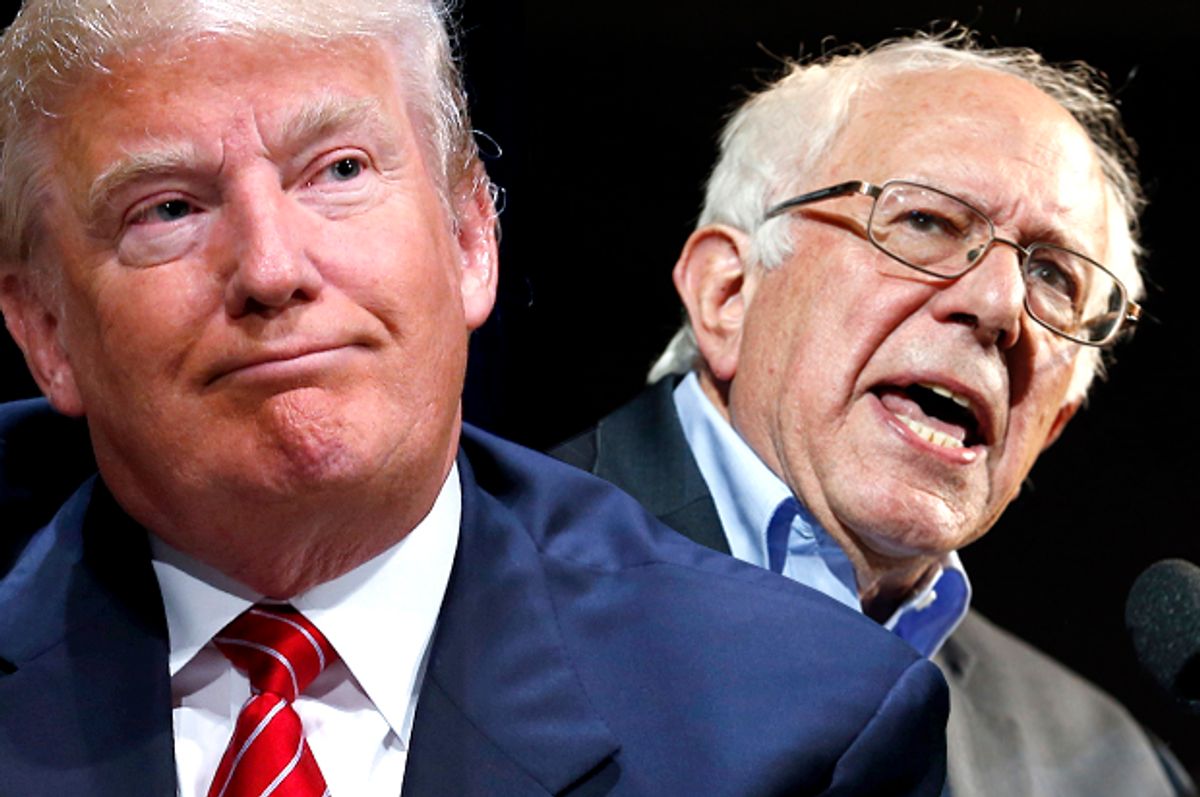 The mainstream media continues to be surprised by the size of the crowds and the intensity of the passion that both Sen. Bernie Sanders and Donald Trump are generating. The reason is simple: The media is quite simply out of touch with the level of anger many American feel after being force-fed, for several years, the phony narrative that the Great Recession is over and that the predatory practices of the institutions that caused it are all in the past.

Yes, the economy is back; its just the middle class that’s in a death spiral. Meanwhile, the media -- all about selling and happy-talking consumerism -- just can’t bring itself to hold up anything but a distorting fun house mirror. This mirror makes people feel like they are alone in their struggle, even as millions continue to be screwed everyday by the very same government that says it is dedicated  to “protecting” them.

When Sanders talks about the need for a “political revolution,” he knows what he’s talking about. When Trump regales his audiences with accounts of the political class lining up at Trump’s trough for their regular feeding, he doesn’t need a speechwriting staff to tell that truth. The crowd roars with laughter because, in that one collective moment, the betrayal of America is put out there for C-Span viewers to see unfiltered by snarky comments from “journalists” on Twitter.

The American Dream has been dead for awhile now, but our hubris and national chauvinism, stoked by a feel-good media, keeps us blind to our own deteriorating economic circumstances. We can’t handle the truth; our political process is built on deception: Tell the folks what they want to hear, and once you're in office serve the interests of those who paid your way.  Retire, build a Presidential library by shaking down the folks that funded your campaigns, and make sure that a relative gets the job next.

The conversation about our national economic wellbeing is done in the aggregate, where nobody actually lives. Its so much worse than just the notion that the 21st century robber barons, who perpetrated the greatest bank heist in global history in  2008, were never charged with a crime. It's worse even than the reality that politicians continue to be bought off and go to work for the very same privileged criminal class that owns them. You want contrition? Since 2008 the big banks that ripped off the nation and got bailed out, then showed their contrition by rigging interest rates and the foreign currency markets all while currying favor with Congress with $65 million dollars in campaign cash. Any politician who takes one dime from this crew needs to be disqualified by voters.

Throughout America, millions of homes are left vacant, pulling down property values and putting public safety at risk when every so often they catch fire. Innocent people die. As this vast stock of housing is permitted to deteriorate in places like Newark, Baltimore and Newburgh, the homeless population swells and people are paying a higher and higher percentage of their monthly income to cover rent. Families are forced to choose between food, health care and education, in what is a kind of 21st century feudalism that includes the largest destruction of African American and Latino household wealth in modern American history.

“Assistance efforts have failed to keep pace with this escalating need undermining the nation’s long standing goal of ensuring decent and affordable housing,” according to a report called "America’s Rental Housing; Evolving Market and Needs" put out by the Joint Center for Housing Studies of Harvard University.

Nowhere is the betrayal of the nation’s vulnerable more evident then in the way the Obama Administration and Congress let 4 million families fighting foreclosure, who applied for help through the so-called Home Affordable Modification Program, twist in the wind.

“It appears that the program has allowed big banks to run roughshod over borrowers again and again,” wrote the New York Times’s Gretchen  Morgenson  last month, describing the findings of the Special Inspector General of the Troubled Asset Relief Program. Morgenson is that oh so rare journalist who has consistently kept her eye on this story when most of her colleagues have moved on, because its all over right?

In her column entitled “A Slack Lifeline for Drowning Homeowners,” Morgenson writes that Citibank turned down 87 percent of the applicants, JP Morgan 84 percent, Bank of American 80 percent, and Wells Fargo 60 percent. The tricks used by the banks to evade responsibility included conveniently losing applicants’ paper work, as well stall tactics that only help to rack up higher fees and charges for the banks. The U.S. government made it so these banks, the very ones that brought about the initial crisis that required we bail them out, are in charge of this so-called second chance for homeowners.

In fact, some of the same Wall Street speculators that caused the 2008 market meltdown, are still “innovating,” this time buying up homes lost to foreclosure and renting them out, creating rental-backed securities they can peddle to investors.

Under our two-party system, in which money buys everything, these financial institutions have continued to plunder, lie, and prey on the American public. The complicit media looks the other way, as if somehow this is all behind us, as if somehow it all got fixed.

The fix is in all right and has been for decades.

Just look at the $2 trillion stashed offshore by U.S. multinationals and Wall Street predators, shifting the cost of paying for this entire charade onto the already bent backs of American taxpayers.

The scale between labor and capital is so tilted now that the public resents public employees because they have the same social contract with their employer the rest of us used to have. And while the 24/7 business channels cheerfully chirp our declining unemployment rate, the actual number of Americans not working is in the tens of millions. Millions more are relegated to part-time work they desperately need to be full time or have to work multiple jobs to make a fraction of what they used to make before they got laid off. Young people are kept in lengthy internships and employers can get aspiring applicants to train and work for free just in hopes of actually getting a real job.

Just as that top-line unemployment number we hear over and over fails to capture the facts on the ground, so does our official federal poverty rate when it comes to the actual economic conditions tens of millions actually endure. Consider that the current formula was cooked up in the 1960s; it bakes in the notion that food will cost a family one third of their monthly income. But today, a half century later, food accounts for just one seventh of the average family’s income according to the National Center for Children in Poverty. Great, right? Not so fast. What is not included in that 1960s-era formula is the huge spike in housing, child care, health care and transportation that has occurred since. The result: Millions of people in need fall above an arbitrarily low poverty line.

Yet even despite the lowball nature of this metric, the latest numbers on the U.S. Census website indicate over 45 million Americans are living at or near the poverty level, including one in five children. The nation’s political class has just settled into this arrangement with no sense of moral outrage. How else to explain their attack on the federal food stamp program and their refusal to extend long-term unemployment benefits.

There is a cocktail-party consensus in the beltway that the poor are poor because of moral defect, not because of arigged system that pits struggling undocumented immigrants up against the poor and near-poor native-born, whose possession of U.S. citizenship has been so devalued by globalism.

In their recently released report, “The Likelihood of Experiencing Poverty Over the Life Course,” researchers Mark Rank, Washington University in St. Louis, and Thomas Hirschl, Cornell, looked at data from 1968 through 2011. They  found that the chance of experiencing poverty some time between the ages of 25 and 60 for at least one year was much higher than previously believed. Rank and Hirschl found that close to two-thirds of the population would experience poverty for at least a year, living at the bottom one-fifth of the income distribution pyramid. And more than 42 percent would find themselves living on an income that ranks in the lowest 10 percent.

“Our previous work has shown that the typical American has a 1 in 9 chance of joining the wealthiest 1 percent of the income distribution for at least one year of his working life,” Rank says in a Washington University press release. “We knew that there would be a large number of Americans on the other side of the spectrum but this research shows specifically how wide that income gap really is.”

A recent global survey by the National Research Council and the Institute of Medicine of the National Academy of the world’s wealthier nations showed that Americans lived shorter lives and were in poorer health than their peers in other wealthy countries. The researchers found that the world’s lone super power suffered from “relatively high levels of poverty and income inequality” compared to the other nations with similar resources and wealth.

“The U.S. health disadvantage also appears to be costing lives. Americans are not living as long as their counterparts in other countries,” according to the report, a trend that researchers say began to show itself in the 1980s.

Nowhere is the rigged nature of this current economy more obvious then how our recent college graduates are faring in this alleged recovery. Today’s twenty-somethings, who did exactly what we we told them to do and graduated from college, are making 10 percent less on average than what their older peers made a decade ago. And of course this current crop of young adults has twice the debt load as the comparable cohort of thirty-somethings.

As a consequence, they are putting off household formation, living with their parents or relying on their parents to pay their rent and buy them food, all which helps subsidize their greedy employers, who know just how to use the threat of scarcity on kids already shackled with mind-boggling debt. This is the fresh crop of debt slaves harnessed up to build the global corporate pyramids.

So far the U.S. oligarchs and their rented political class are getting off light.

Americans have every right to be as angry as did the rebellious farmers from Plymouth County Iowa who in 1932-33 rose up to fight foreclosure. First they went on strike  by first withholding their commodities  from market and then they escalated by marching a judge out of his courtroom and threatening him with hanging when he said he would not support a state moratorium on farm evictions.

Its much later in the national narrative than the pundit class realizes. They need to get out more.

As for Sanders and Trump, the one thing they both get and can communicate brilliantly,  America is no longer working for Americans and hasn't been for awhile now.