The secret Republican love affair with Planned Parenthood: A history

While party faithful now call for the organization's neck, there was once a time when it's leaders backed the cause 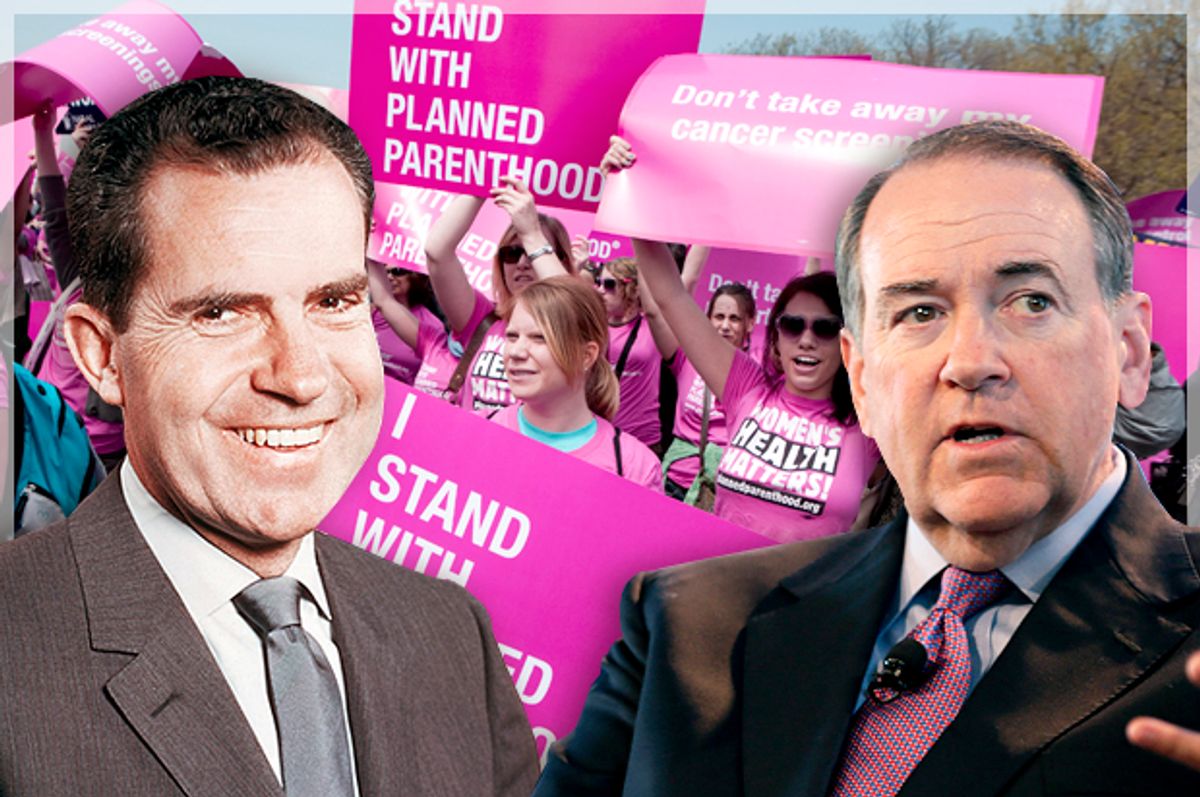 Planned Parenthood might be public enemy #1 of the Republican Party today, but for most of the 20th century it was a favorite cause of well-heeled, WASP-y Republicans.

At the time, the biggest opponents of birth control were the leaders of the Catholic Church. In 1921, New York Archbishop Patrick Hayes got the police to raid the first public meeting of the American Birth Control League on the grounds that it was indecent. Hepburn and other activists in Connecticut battled the Catholic Church for years over access to birth control, a fight that wasn’t won until 1965, when the Supreme Court legalized contraception in the historic Griswold v. Connecticut decision.

And while there were class and racial overtones to some of the early birth control activism, which promoted making contraception more widely available to poor white immigrant populations and African Americans, women like Hepburn were motived by a genuine desire to give women control of their reproductive destinies. This was something more and more WASPs were doing themselves as the diaphragm became popular and the Episcopalian Church approved the use of birth control in 1930. “I felt that woman would always be hopelessly handicapped if they did not have control of how many children they produced,” she said.

Once contraception was legalized, attention turned to getting federal funding to provide it to low-income women. Democrats like President Lyndon B. Johnson backed a federal birth control program, but were afraid of running afoul of the Catholic Church and alienating the party’s Catholic base. So the task fell to congressional Republicans under the leadership of Congressman George H.W. Bush, whose father Senator Prescott Bush had been a leading fundraiser for Planned Parenthood. Bush was an ardent supporter of federal family planning funding; his enthusiasm for the cause earned him the nickname "Rubbers."

It was future GOP President “Rubbers” Bush who in 1967 secured the first federal funding for birth control, and by extension Planned Parenthood, as the decision was made to provide grants to existing providers rather than create a public network of birth control clinics.

Republican President Richard Nixon was another major backer of federally funded family planning. He called for a national family planning program shortly after he took office in 1969 and worked with Bush, who headed the Republican Research Committee Task Force on Earth Resources and Population, to secure passage of the Family Planning Services and Population Research Act. This created the Title X Family Planning Program to provide sexual and reproductive health services to low-income individuals and is still a major source of funding for Planned Parenthood.

Throughout the 1970s and 1980s, support for Planned Parenthood funding was bipartisan, even as the issue of abortion became increasingly polarized. But that began to change with the “Republican Revolution” of 1994. Once the Republicans took control of Congress, the Christian Coalition, the U.S. Catholic Conference and the National Right to Life Committee began strategizing about how to limit access to abortion. One of their tactics was to assert that funding for domestic and international family planning providers facilitated abortion by “freeing up” money to support abortion services. By some bizarre twist of GOP logic, family planning now contributed to abortion rather than preventing it.

But the real death knell to the GOP-Planned Parenthood relationship came when the Christian Coalition and the NRLC began scoring family planning funding on their influential voter scorecards. “When the very conservative groups started including international family planning on their scorecards—things like the UN Population Fund and population programs—and scoring them as if they were abortion, things really changed,” Robert Gustafson, an aide to former Republican Illinois Rep. John Porter, told me for a 2011 article in Conscience magazine.

“If you opposed abortion but voted for UN family planning funding, you got 90 percent, and that was unacceptable,” he said. And increasingly this orthodoxy was becoming central to Republican identity. In 1998, every single candidate for GOP leadership positions scored 100 percent on the Christian Coalition’s scorecard.

The following years saw a series of political attacks against Planned Parenthood further alienated it from the Republican Party. When the GOP tried to defund Planned Parenthood in 2011, only six Republicans voted against it. When the Senate voted to defund the organization most recently in early August, only two Republicans bucked the measure, and one of them, Majority Leader Mitch McConnell, voted against it for procedural reasons.

The consequences of the Republican-Planned Parenthood break-up are potentially devastating for women. Planned Parenthood receives 40 percent of its funding, some $528 million in 2014, from federal and state government sources. It plays a unique role as a dedicated provider of reproductive and sexual health services; one in five American women has received services from Planned Parenthood’s 700 clinics, and low-income and young women are particularly dependent on it as a trusted reproductive health care provider.

Republicans are willing to sacrifice women’s health because they’re looking to cripple the nation’s best-known provider of abortion services and silence one of the most important political voices in favor of reproductive choice. And to do that, they’re willing to destroy everything Kit Hepburn and generations of Republicans built.