Morrissey gives the most Morrissey interview possible to Larry King: "Obama — is he white inside? It’s a very logical question" 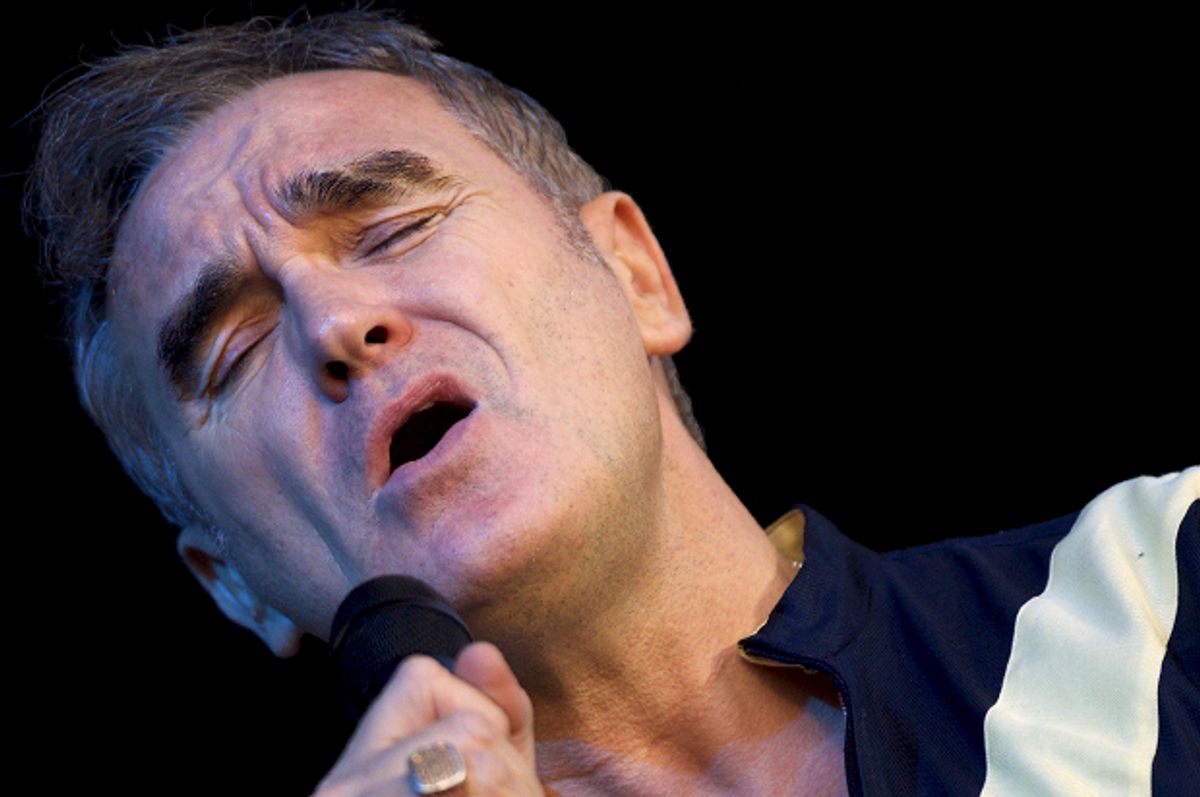 Despite being a best-selling memoirist and platinum-selling musician, Morrissey likes to keep people guessing about most things in his life—his career moves, his sexuality, his day-to-day activities. He’s not on social media (despite having a verified Twitter account under his name, Moz insisted earlier this year it’s not him), and prefers to communicate official news either via the fan website True-To-You.net or email interviews. As a result, Morrissey remains an elusive figure, both highly public and completely enigmatic — an integral part of popular culture and the perpetual outsider.

The balancing act is masterful, especially as he’s sustained it for well over three decades, first in the Smiths and later (and currently) as a solo artist. Yet when Morrissey does grant interviews, he’s an inimitable bundle of contradictions — confident and yet self-deprecating, coy but also brutally honest. This innate friction manifested itself in delightful, meaningful ways during a new sit-down interview with Larry King, the first in-person conversation he’s done in about a decade.

As King described him as “one of the most accomplished, eccentric and legendary musical artists of a generation,” Morrissey had a bemused, “Who, me?” smirk on his face; when King mentioned his “iconic solo career,” he barely suppressed an embarrassed grin. And when King asked why he was chosen to conduct the interview? “Well, because of you, really,” Morrissey demurred. “Yes — your reputation, your name. that’s enough.”

The interview was actually rather poignant. Onstage, Morrissey thrives on mystery and distance — always being tantalizingly out of reach from the crowd, both emotionally and physically. However, sitting across the table from King — a lei of necklaces jingling on his bare chest like a heavy ring of keys — he looked and sounded rather vulnerable. For mega-fans, there wasn’t much new to learn. However, to hear Morrissey talk about what his music means to him was particularly moving.

“The songs are so important to me,” he said. “They have been my life, always, and they come before anything else. They are me. It’s not just a repertoire — and I don’t go through the motions. And if I’m tired, it’s because I’m physically travel-weary, it’s not because, ‘Oh dear God, here comes that song again.’”

Here are 10 major takeaways from the interview, which is available in full here.

1. He doesn’t see himself as outspoken.

Morrissey has always been rather vocal about his ethical boundaries, and isn’t shy about expressing disdain for certain societal and cultural mores. All of this has given him the reputation of being somewhat of a curmudgeon. Still, Morrissey immediately disagrees with King’s assertion that he’s “outspoken.” Is he strongly opinionated, then, King asked? “Well,” the vocalist says with a trilling growl. “I’m just an ordinary person in many ways. I just speak the words of ordinary people. I’m not flash, I’m not glitzy and I’m not part of the industry. So sometimes I can seem a bit strange.”

Morrissey says he doesn’t miss the Smiths, and pretty much shut down future reunion talk with a few concise sentences: “We were very young, we didn’t know what we were doing. And we didn’t like each other that much. So, it was nice when it finished.”

3. However, he very much values his current bandmates.

“The band I’m with, we’re very united,” he says. “They’re not just session musicians. It’s a very, very, very close band. We love each other, and we’re really close.”

4. Politically, Morrissey had some harsh words for, well, everybody.

He reiterated his dislike of Michele Bachmann and Sarah Palin (“I don’t think they’re tough — they’re insane”) and other GOP front-runners, although he admitted that he thinks we’re “ready” for Hillary Clinton: “I think so.” However, Morrissey saved his harshest criticism for President Barack Obama, specifically the way he’s handled Ferguson and ongoing issues of police brutality: “Obama—is he white inside? It’s a very logical question. But I think he probably is.”

5. His cancer diagnosis did unsettle him.

Morrissey confirmed his cancer diagnosis of Barrett’s esophagus, and says his treatment involved scraping the esophagus. The diagnosis did rattle him, although not right away. “You don’t really hear that word, that c-word. You don’t really seem to hear it,” he explained. “Later, when you’re on the stairs by yourself, it triggers in your mind.” Still, it’s OK to be cautiously optimistic about the future. Would you say you’re in good health today, King asked? “Blooming,” Morrissey answered with a cheeky smile and an eyebrow raise.

6. The interview was charmingly imperfect.

A fan-sent question, “What memory glands would you want to get your hand on?” sent Morrissey into a fit of laughter, perhaps because of a glaring typo: The author clearly meant “mammary glands,” and was referencing a line in the Smiths’ “Handsome Devil.” “I’m not answering that — he can mind his own business,” Morrissey said.

At the tail-end of a discussion about Morrissey’s veganism, the avowed activist took off a shoe and handed it to King. The host couldn’t believe the loafer was made out of plastic, not leather, causing Morrissey to turn to the studio audience and ask, “Why doesn’t he believe me? I mean, would I really lie about this? Is this the place to lie about shoes?”

Several weeks ago, Morrissey put out a statement alleging sexual harassment by a security worker at the San Francisco airport. When King asked about it, he elaborated that it involved the worker “put[ting] his finger down my rear cleavage.” The worker’s response, when challenged about the incident and being accused of assault? “‘That’s just your opinion,’” Morrissey says the man said.

9. His frank talk about mental health was especially poignant.

In response to a fan question about his struggles with depression, Morrissey acknowledged, “I’ve had it for many, many years. I refer to it as the black dog, and it doesn’t go away. It’s usually the very first thing when you wake up.” He chalks it up as “part of being a sensitive, open human,” but notes he doesn’t take medicine. And he says he hasn’t thought of “harming himself,” but added quickly, “Many others have.”

10. However, he’s absolutely the happiest when performing live.

“I enjoy to sing and to play more than ever,” he said at one point. And to a question from a fan about what he does to prepare to go onstage, he said: “No yodeling, no alcohol, no gargling, no juggling—I just go on,” before adding, “You could almost say—if you dare—that I’m happy.”