My education in toxic masculinity: Fist fights, bullying, and the strange glory of MMA

I finally stopped believing in raw violence and alpha males, but I can't stop watching the most brutal sport 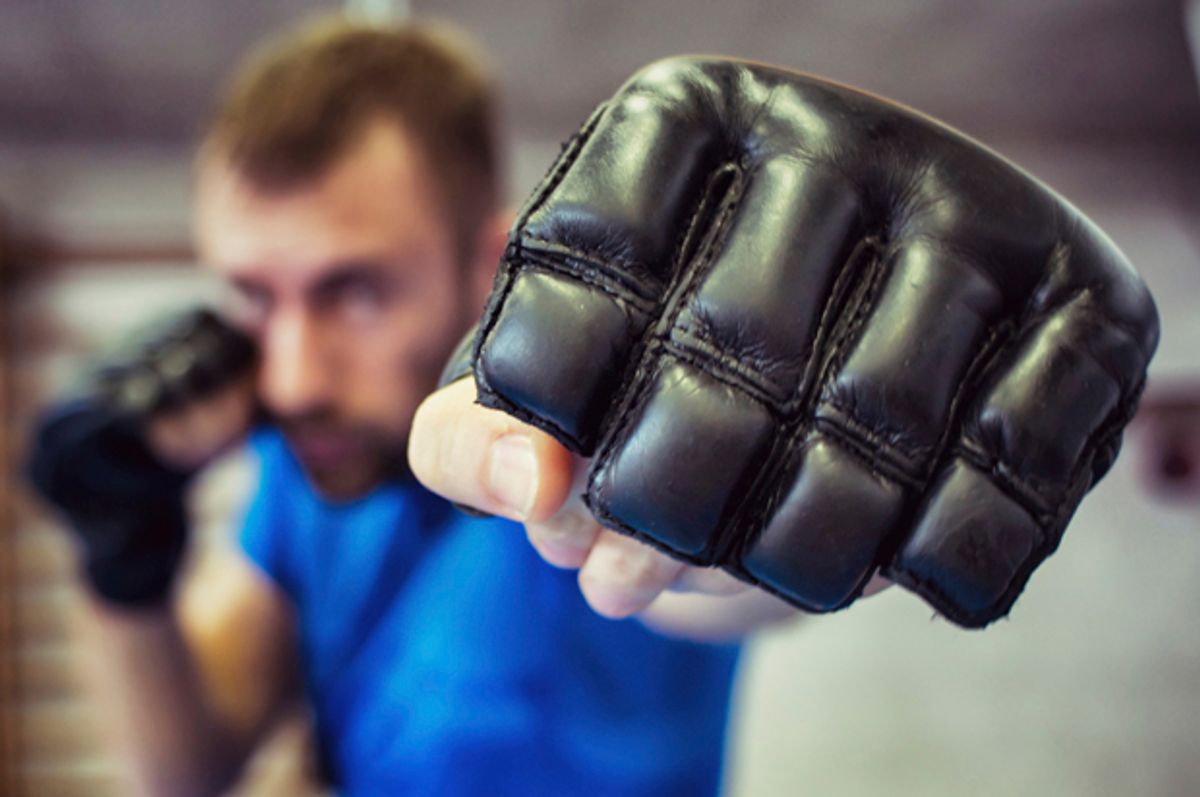 The first time I realized I might be wrong about mixed martial arts was a speech I gave in college. I played a clip of a fight: One fighter put another in an arm-triangle choke – a maneuver where you use your own arm and the opponent’s arm to cut off the blood supply to the brain, rendering them unconscious unless they tap out. After the clip aired, I looked out at a wide-eyed audience. “Pretty cool, right?”

Later, I shared the story with another MMA-obsessed friend. “Don’t worry about that girl,” he said. “She’s the kind of chick who says shit like that but as soon as her boyfriend can’t win a bar fight, she’d break up with him for being a pussy who can’t fight.”

And just like that, my worries were assuaged. The world retained its familiar shape: The one where the strongest guys won, women were helpless to their charms, and unarmed violence was the ultimate answer to any and all questions. I didn’t know the words “toxic masculinity” yet. I only knew it as my way of life.

My exposure to martial arts started when I was young. My father was a lifelong martial artist who bought the very first UFC event in 1993. When I was in first grade he enrolled me in a karate school, a rare indulgence in our then-cash-strapped household. The company my father worked for financed the owner's purchase of the place, so I attended for free. (Reminder for the uninitiated: Karate is not a blanket term for martial arts. Karate is just one martial art of many.)

The place was, as martial arts parlance would put it, a McDojo. A McDojo teaches techniques of dubious value and efficacy for a very, very steep price. Belt ranks require cash, and so does testing for said ranks. Most karate schools out there are McDojos. Pro tip: If the place does kids birthday parties and katas, get out.

Some of my earliest memories come from that karate school. The instructor rolling up in his white Corvette. The borderline comical photographs of the instructor hanging all over the wall: the one of him shirtless karate-chopping a giant block of ice (a shame ice never fights back. By the way, he let it sit out in the sun for hours before chopping it); the one of him in an American flag-patterned gi throwing a flying sidekick. A veritable parody of the suburban martial arts "master" running a karate cult of personality.

The dojo peddled glorified babysitting rather than “self-defense.” We had to jump over a rope a lot. We did a choreographed nunchuck routine. They made us kick a solo cup – a useful skill to have. Sometimes this one teenage instructor would kick the cup all the way to the ceiling to impress everyone. Oohs and ahhs always met the stunt.

One day we engaged in a rarity for a McDojo: Sparring. Now, mind you, we had so much padding we might as well have been coated head-to-toe in bubble wrap. Still, to a first-grader, that’s a big deal. An even bigger deal: We were sparring the sensei. I was a first grader. I didn’t know he wouldn’t really be fighting us. I just kept thinking, “Oh my god. He’s the sensei. He’s a black belt. He’ll kill me, even if he goes at half strength!”

So I – along with a small handful of other kids – decided not to spar that day. When class ended, my father pulled me out of the school so fast he didn’t even let me grab my shoes. He dragged me across the parking lot, barefoot. He tossed me in the car and berated me the whole way home. How could I embarrass him like that? How could I be such a coward? I cried, which only made him madder because men are never, ever supposed to cry – even when they’re just in first grade. If there’s no crying in baseball, there’s certainly none in martial arts. I felt even worse when my sister told me my father had already ordered a pizza at the place next door, anticipating being proud of a triumphant son.

I never forgot that moment: the feeling of the hot, gravelly parking lot pavement on my feet, the tears pouring down my cheeks – the hysterical kind of crying where you can’t even breathe. It embedded within my psyche a pathological fear of cowardice. This is a typical fixture of the die-hard MMA fan: Do not look weak under any circumstances. “Come back with this shield, or on it,” as the Spartans said.

Eventually my father made enough money for me to switch to a kickboxing school. He pressured me to join the wrestling team, but the kids who joined it were the same lot who bullied me, and I didn’t want more of it. And thanks to a hazing scandal at a local football team, I also feared football. So he let me stick with kickboxing.

Training started out as a chore. I didn’t particularly want to do it, the same way I didn’t want to play football or baseball. Being born to a sports-obsessed father who fiercely defended traditional gender roles and ideas of masculinity afforded me no choice in either. I had to play sports. That’s what all men did. I had to train. That’s what the real men did.

Over time, training took on a significance. I wasn’t popular in middle school. You’re a target for bullies if you have no friends. One day in gym class, a bunch of bullies sprayed Axe body spray in this kid’s eyes. He had just changed into his gym clothes. They took his discarded regular clothes, put them into the locker room urinal, and took turns pissing on them while the kid writhed on the floor in pain, temporarily blinded.

So I trained knowing I’d have to fight at some point. I didn’t want to, but after a year of threats and casual violence, I couldn’t take it anymore. I chose the least-liked of the weakest bullies in the school and beat that guy up after he slapped me in the face during lunch. I saw fighting’s value after that. Middle school taught me might always makes right; fists stop bullying, and nothing else. After graduating high school, I started training in Brazilian Jiu-Jitsu and MMA. I only stopped after two permanent injuries.

In addition to training I was, of course, a fan. Training and fandom are inextricably (and perhaps inexplicably) linked in MMA. A portion of the fan base will shame those who criticize fighters without having ever fought themselves. “You don’t deserve the right to criticize unless you’ve stepped foot in the cage, you keyboard warrior!” No other sport or facet of life operates in such way; you can still send back your food in a restaurant if it’s not cooked properly even if you’ve never been a line cook or chef. Yet to MMA die-hards this twisted method of thinking is gospel truth.

“Fighting is in our DNA,” UFC president Dana White frequently claims. If you were to compare MMA and football, MMA and basketball, or MMA and pretty much any other sport, MMA fans would claim MMA is the “purest” of the sports. They say this because it’s a real fight, or the closest legal alternative. When two people have an argument and want to take it outside, they don’t play tennis to solve the dispute. They fight.

By college, I was a full-blown die-hard.

“If a UFC champ came up to you and said the sky was green instead of blue, you’d have to agree,” I used to remark. “Because if you disagreed and he threatened to beat you up if you didn’t agree with him, what would you do? You’d have to agree or he’d beat the shit out of you and could kill you. So the sky would be green!”

But real life intruded on my fantasies about the world. There was that moment in my speech class, when the audience reflected back to me that my “heroes” were not necessarily acting heroically. Then, at a small get-together, I saw another guy who trained in Brazilian Jiu-Jitsu – a grappling art – grab one of our non-MMA friends. The grappler tossed our mutual friend to the ground “like a minor bitch” and choked him out. You see, the grappler badly wanted to sleep with the guy’s girlfriend. Publicly emasculating him in front of her and a few other spectators was the fastest route to doing it. How could any woman not want to switch boyfriends at such a display of fighting prowess?

The tactic did not succeed.

“How could this be?” I thought. Showing his alpha strength didn’t automatically result in getting the girl? Maybe she thought he was kind of brutish and awful – an emotionally stunted neanderthal incapable of wooing a woman through more sophisticated means? The more I ventured outside the seedy landscapes of MMA, the more my “fighting > everything” illusion began to crumble to the canvas.

Being the world’s toughest unarmed combatant means nothing since a well-placed drone strike could take that person out pretty quickly. Also, I’ve been in more croquet matches in life than fights. Does that mean croquet is the truest pursuit for me? The logic of MMA worship stopped making sense. Violence is not a virtue. I began to see that the concept of “might” has many aspects in the civilized world beyond mere brute strength. Being strong can mean breaking up a fight. Being strong can mean avoiding fights entirely, as well as the kind of people who start them. Being honest, fair to other people.

But still, I watch MMA. There’s nothing in the world as exciting and riveting as high-level MMA. Raw, visceral, violent, artful. I’ve learned that MMA isn’t really pure. But then, nothing is. The world is full of liars, ass-lickers, thieves, hypocrites and sycophants. But that all disappears into flurries of fists once the cage door closes. There’s no more bullshit. It’s just two fighters. Both combatants think they’ll be the one to violently subdue the other, but one is wrong. One is going to wind up starched or screaming when their limb is being torqued beyond recognition. Which one will it be? I don’t know about you — but I’m going to stick around to find out.