Like Big Tobacco before it, the soda giant's PR tactics have grown increasingly desperate. The public is onto them 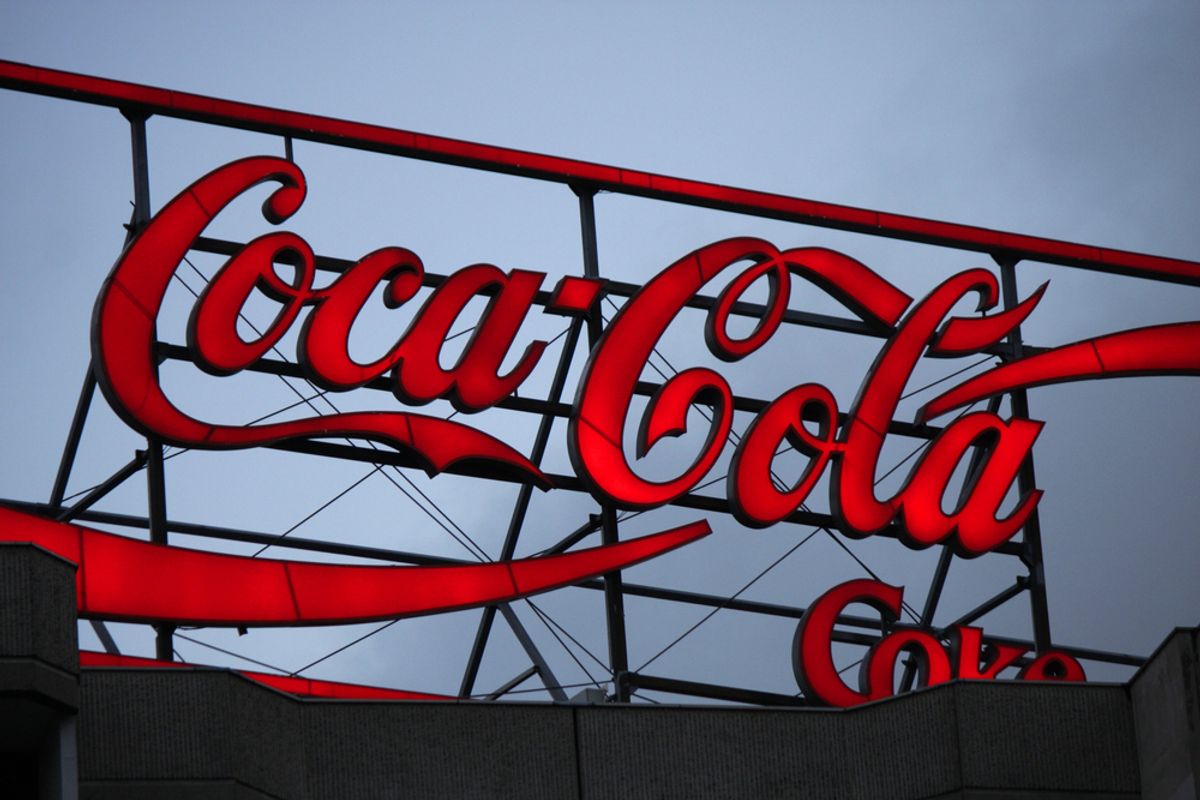 The soft drink industry is in a full-blown crisis. Soda sales are on a 10-year skid, and laws are being passed to tax and limit their sales, thanks to a growing consensus among health researchers that sugary beverages are the primary culprits behind obesity and related conditions like diabetes and heart disease. Coca Cola’s PR tactics have become increasingly desperate and insidious. A 2013 television commercial suggested that the 139 calories in a can of Coke could be burned by 75 seconds of laughing out loud, or a celebratory dance while bowling, claims that were roundly criticized at the time. It recently came out that Coke is using a similar tactic, but with a more serious, respectable veneer, when the New York Times reported the company’s undisclosed ties to the nonprofit astroturf group Global Energy Balance Network, a relationship that included lots of money, and even secretly registering the GEBNs website on its own domain.

This isn’t the first time makers of dangerous products have found ways to claim evidence against them is inconclusive, or have funded supposedly independent research programs that purport to search for the “real” roots of the problem. The tobacco industry stalled for years by using public information campaigns to create controversy over established facts about the dangers of smoking. The gun lobby borrowed these tactics to promote the idea that having lots of unregulated guns around keeps us safe, even as our rate of gun-related deaths ballooned compared to other countries.

Such tactics are sometimes referred to as “misdirection,” which in the case of the tobacco and gun lobbies has been defined as “[altering] the nature of the debate until it is winnable, or at least not loseable. In some instances stalemate will do. If new information arises that shows an existing position to be wrong, move on to another.”

The mission of the GEBN, per its website, is, “To connect and engage multi-disciplinary scientists and other experts around the globe dedicated to applying and advancing the science of energy balance to achieve healthier living.” The “science of energy balance” refers to the well-established fact that what you eat is only part of what determines your weight. The other part is how many calories you burn.

This message is particularly dangerous for the simple reason that it’s largely true, and on the surface it’s hard to find fault with a pro-exercise message. But the fact that gaps remain in our understanding of the relationship between diet, exercise and health does not mean we should alter the prevailing consensus about the dangers of soda. But that is what GEBN threatens to do; its message implies that if you do more exercise, you can enjoy more Coke.

But while exercise burns calories, it also increases appetite, which can lead to more eating, which can replace all of those burned calories. People who eat more sugar can become insulin-resistant, so their bodies make more insulin, which leads to more fat deposition.  And foods that are high in fiber, like nuts, lead to less weight gain per calorie than foods with a similar amount of calories but less fiber, like, say, Coca Cola. While it is possible to outrun a bad diet, there is no question that it’s easier to manage your weight by focusing on what you eat. Much easier. But GEBN threatens to question this reality, just the same, by misdirecting the focus on obesity and related conditions away from diet and toward energy balance.

GEBN's website states: "People can be in energy balance at any body weight or BMI, whether lean, overweight, or obese. This simply means that body weight is stable and neither increasing or decreasing.”

“Scales don't measure the presence or absence of health, they measure the gravitational pull of the earth,” explained Yoni Freedhoff, who first discovered GEBN’s ties to Coca Cola and outed it to the New York Times.  “So yes, if you're not gaining, your weight can be described as being representative of energy balance. Whether or not you can be described as being healthy would depend on whether or not you were actually healthy.”

I reached out via email to Marianella Herrera, a member of the GEBN executive committee who received the Liberty Mutual Foundation’s 2010 Diabetes Research Award in Venezuela. When I asked her if she felt she was part of a Coca Cola PR campaign, she responded, “Absolutely not.”

Dr. Herrera is a well-respected, highly credentialed authority on diabetes, and I have no reason to doubt her integrity. She acknowledged that her lab is funded by Coca Cola, and that she knew about Coca Cola’s relationship with GEBN from the beginning, but claimed that the conflict-of-interest forms signed by the members of the executive board eliminated the possibility that the funding GEBN received from Coca Cola would in any way influence their results. If any of her team’s results weren’t friendly to Coca Cola,  she would still publish them, she said. “Results are results and should be taken into account for solving the problems.”

Herrera’s intentions may be pure as the driven snow, but the odds are not in favor of this claim. According to nutrition and public health professor Marion Nestle, 83 percent of research funded by Coca Cola has concluded that drinking sugary beverages is not harmful.

When I asked Herrera if sugary beverages like Coca Cola have a place in a healthy diet, I got a typical answer that lays the responsibility on the shoulders of individual consumers:

More than say that sugary beverages can or cannot be a part of a healthy diet, let’s see facts: American Diabetes Association has a recommendation that people should limit the intake of sugary beverages because too much sugar is linked to developing type 2 diabetes, but also make the statement that if you want to consume sweets you should also take into consideration how you substitute the consumption of other carbs in your diet. In other words, watch what you are eating and drinking. Is it bad to have a coke? No. Is it bad to drink 6 cans of coke a day? Yes, that might get you into trouble, as could get you into trouble eating a whole cake on a regular basis or a tin of ice cream every other day!

Herrera's response went on for 560 words. I showed Herrera’s response to Freedhoff, who was impressed with the “gymnastics,” as he put it, that she went to in order to dance around my straightforward question. Freedhoff offered this succinct alternative: “Sugary beverages are a treat, but not a healthful one, and consequently the right amount to include in your diet is the smallest amount you need to enjoy your life.”

I asked another GEBN executive board member, Wendy Brown, director of the Center for Research on Exercise, Physical Activity and Health at the University of Queensland, how far someone would have to run in order to burn off a can of Coke. “This is exactly the sort of knowledge and understanding we are trying to promote. Most people have no idea how much movement is needed to balance their energy intake,” she said. The answer is based on the person’s weight, and the level of activity, as well as their genes. In other words, it’s complicated.

This complexity might very well be in Coca Cola’s best interest, because it makes it impossible to say, in sound bites, how much a person will have to do in order to work off a can of Coke. And obscuring that answer for as long as possible, while misdirecting the discussion away from simple, well-established facts, might be the best-case scenario for future sales. Muddying the issue even keeps alive the idea that laughing out loud for a minute and a half might actually burn off a can of Coke’s worth of calories. But what it’s really doing is kicking the can down the road.

If GEBN truly wanted to clear up the relationship between diet, exercise and weight, it wouldn’t have much to do at all. That work has been done. And the results aren’t what Coca Cola wants to hear.

It doesn’t help Dr. Blair’s case that this video is creepy as hell. He never once looks at the camera. Bottles of Coke and Sprite make a cameo. And Blair looks like he could use a few laps around the track himself.

As for his words, I suppose it’s grammatically correct that there is no compelling evidence that fast food and sugary drinks are THE cause of obesity, because one could gain weight by just eating straight sugar on the couch. Nonetheless, those comments are shamefully misleading, especially given they were made without disclosing GEBN’s cozy relationship with Coke.

There are mountains of evidence that soda consumption is a major contributor to chronic health conditions like obesity, type-2 diabetes and coronary artery disease. By misdirecting the discussion away from diet and shifting the focus onto exercise, or lack thereof, Coca Cola is following a trail blazed by Big Tobacco and followed by the gun lobby: change the debate into one that is winnable, or at least to one that hasn’t already been lost.

These tactics may be good for a few more years’ worth of sugary sales, but the wagons will continue to circle. And as Big Tobacco found out the hard way, attempts to obscure known truths can carry a hefty price tag.