They also claim this will reverse climate change. Will it work? 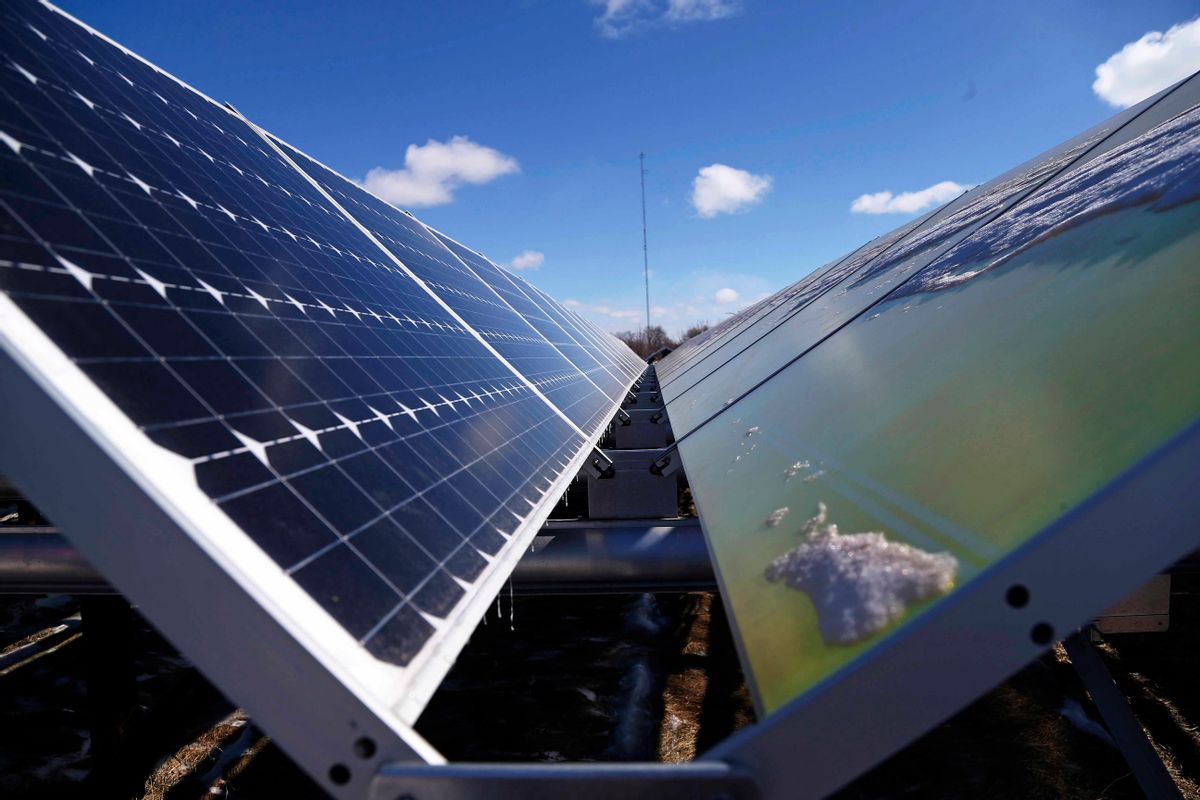 In this Feb. 26, 2015 photo, solar panels that are part of the Wright-Hennepin Cooperative Electric Association's community gardens are shown in Rockford, Minn. Community solar gardens are a new concept in renewable energy, allowing customers who cannot put up solar panels to buy into the green energy boom anyway. (AP Photo/Jim Mone) (AP)
--

Carbon capture is an idea that's been around for a while, but it's always seemed like a bit of an afterthought, a way to slightly slow the pace at which we're pumping carbon dioxide into the atmosphere. But what if we could do at a scale that would suck all the carbon we've emitted since the industrial revolution right out out of the atmosphere, and turn it into something incredibly useful?

This is the claim being made by Stuart Licht, a professor of chemistry at George Washington University, who earlier this month published a paper in Nano Letters demonstrating a method of turning atmospheric carbon dioxide into solid carbon using concentrated solar power, with only oxygen as the byproduct. The process, called Solar Thermal Electrochemical Photo (STEP) carbon capture, is highly efficient, as it uses both the visible light and heat of the concentrated solar radiation:

Using the thermal energy of the sunlight, the cell is heated to a temperature above the melting point of lithium carbonate. Atmospheric carbon dioxide is then bubbled through the cell. The CO2 reacts with the lithium carbonate, and depending on the reaction temperature attained, either solid carbon is deposited at the cathode or carbon monoxide is produced. This conversion of carbon dioxide into solid carbon is facilitated by the visible rays of the sun that drive the reaction, when the visible rays are converted to electricity through photovoltaic techniques.

STEP can turn carbon dioxide in solid carbon or carbon monoxide depending on the temperature used, can shape the carbon into valuable nanofibers of custom width and diameter depending on the amount of current applied, can smelt iron and aluminum from their ores, and even produce bleach. So not only are we getting what Licht calls a “means of storing and sequestering carbon dioxide in a useful manner, a stable manner, and in a compact manner,” we're also maybe getting a new industrial revolution.

What's the catch? Well, according to MIT Technology Review:

As for the technology’s emissions-cutting potential, the researchers are optimistic. They calculate that given an area less than 10 percent of the size of the Sahara Desert, the method could remove enough carbon dioxide to make global atmospheric levels return to preindustrial levels within 10 years, even if we keep emitting the greenhouse gas at a high rate during that period.

To save you from Googling it, 10 percent of the Sahara is about 360,000 square miles. Covered with solar panels, doing nothing else for ten full years. In a world that hasn't yet come around to the idea of not burning coal just because it sometimes seems a bit cheaper, this might be a bit of a stretch. Besides, the claims for the benefits of carbon capture may be overblown: other studies show that not even large scale carbon capture will fully reverse the climate change process we've set in motion. But with the nations of the world moving uncertainly towards a global climate treaty that has no clear means of enforcement and probably won't do enough to keep the world from catastrophic warming, would it hurt to keep STEP -- and other geoengineering schemes like it -- in the back of our minds?