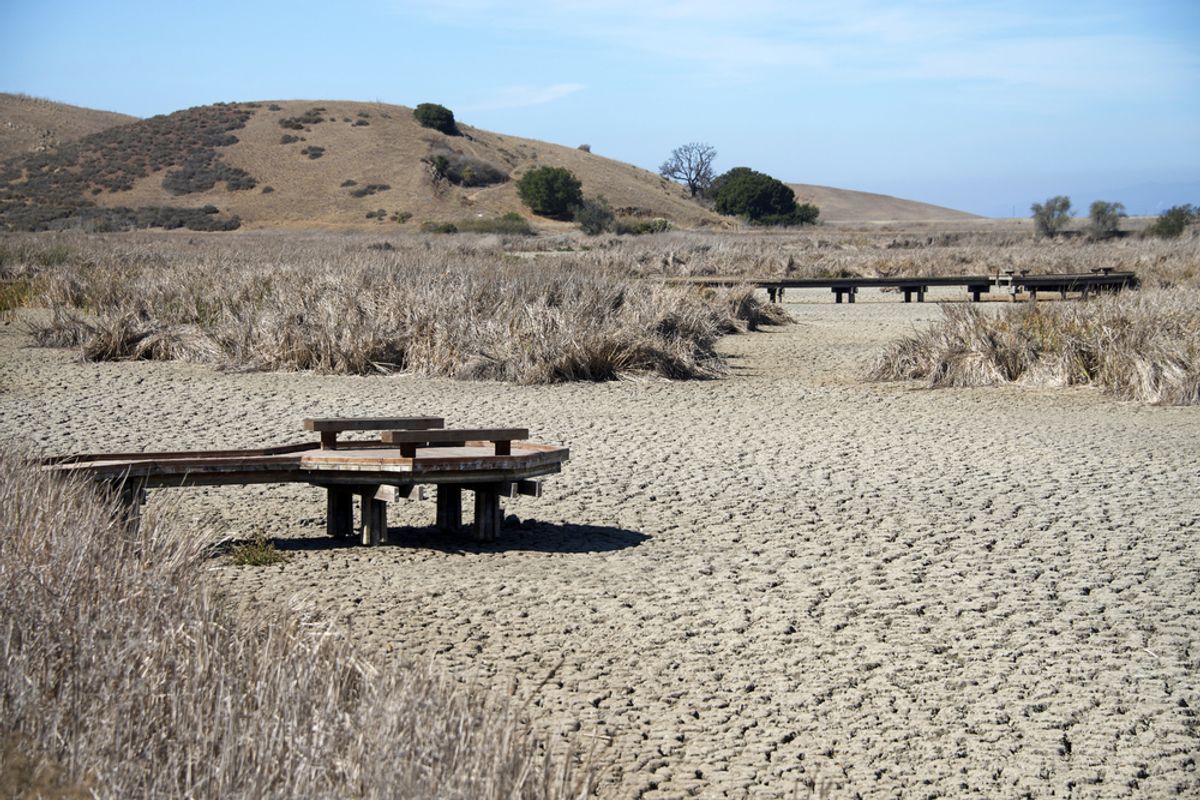 They especially happen in California, where a long history of water crises inspired both innovative water conservation strategies and ongoing battles over the limited resource. This most recent megadrought, historic as it may be in length and severity, is by no means unprecendented; and it is, say the authors of a new paper published in the journal Geophysical Research Letters, primarily the result of national weather variations.

Regardless of how much carbon we spew into the atmosphere, in other words, the drought was going to happen. But climate change, they found, made it measurably worse.

How much worse? Likely somewhere between 15 and 20 percent, said A. Park Williams, the study's lead author and a bioclimatologist at Columbia University, in a statement, although it can be blamed for as much as 27 percent of the drought conditions experienced between 2012 and 2014. His team looked at data for precipitation, temperature, humidity, wind and other factors going back to 1901, and found that while rainfall patterns have remained random, temperatures have been steadily increasing with global warming. And that, they say, has been enough to have an impact on drought conditions.

“A lot of people think that the amount of rain that falls out the sky is the only thing that matters,” explained Williams. Indeed, a study released last December by the National Oceanic and Atmospheric Administration concluded that the rainfall deficit was the result of a naturally occurring high pressure system, prompting headlines claiming that climate change was not responsible for the drought.  However, Williams said, "warming changes the baseline amount of water that’s available to us, because it sends water back into the sky.”

He explained the phenomenon in more detail in an interview with the New York Times:

Since 1895, California has warmed by a little more than 2 degrees Fahrenheit. That increase sounds small, but as an average over an entire state in all seasons, scientists say, it is a large number. The warmer air can hold more water vapor, and the result is that however much rain or snow falls in a given year, the atmosphere will draw it out of the soil more aggressively.

Dr. Williams calculated that the warmer atmosphere over California is able to absorb about 8.5 trillion more gallons of water in a typical year than would have been the case in the cooler atmosphere at the end of the 19thcentury. The air does not always manage to soak up that much, however, because evaporation slows as the soils dry out.

This is the first study to put a number, however approximate, on the degree to which climate change has contributed to the drought. But it's not the first to find that the two are related. Unless something is done to reduce our greenhouse gas emissions, they all suggest, climate change-intensified events like these are going to become more common: the United States' chances of experiencing a drought that will make "the [previous] megadroughts seem like quaint walks through the garden of Eden,” according to an alarming study released earlier this year, are as high as 80 percent. Droughts happen -- and they're about to happen more.