This new TV show is totally not about Tom Cruise, Katie Holmes and Scientology — and we'll be watching, for sure

A new show about a TV actress marrying a huge Hollywood star with an unusual religion — nope, doesn't ring a bell 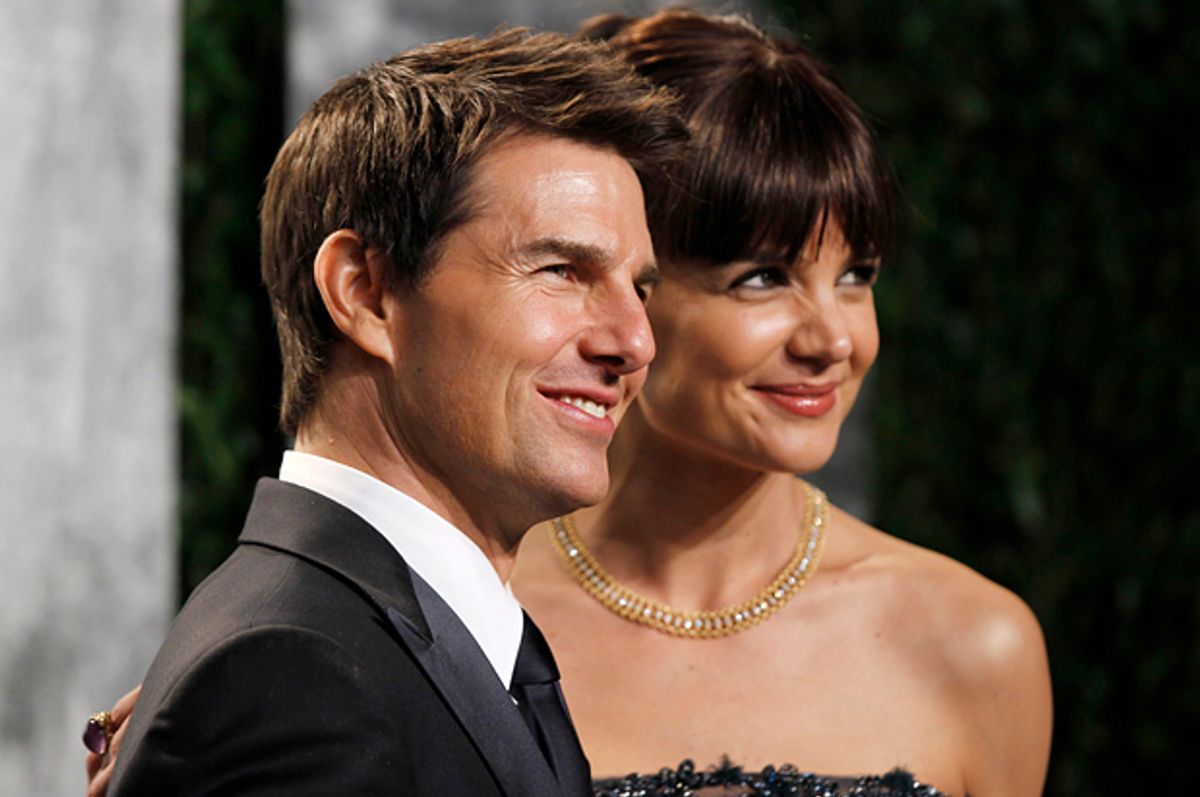 The latest is a pilot acquired by E!; the Hollywood Reporter describes it as “about a TV actress named Megan Morrison who is offered a $10 million marriage contract with Hollywood's biggest star.” The huge Hollywood star, it turns out, is involved in an unusual religion.

Here’s what the Reporter says about "The Arrangement," to be helmed by “Mad Men” producer Jonathan Abraham and which has recently begun casting:

The script details star Kyle West's commitment to a spirituality center called The Institute for the Higher Mind, which is headed by a controlling best friend who takes credit for his career. Toward the end of the pilot, West offers to take the actress, who is at the time best known for her work on a TV series, on a date to Italy, where Cruise and ex-wife Katie Holmes were first photographed.

But lest you jump to any conclusions, the story warns us that, “an E! spokesperson says Cruise isn't the inspiration: "The character of Kyle West is not at all inspired by anyone in particular. Kyle is a young, rising star who was recently left at the altar by his actress ex-girlfriend."

Funny, it reminds me of a book that just came out last month: The novel “Movie Star by Lizzie Pepper,” in which celebrity ghostwriter Hilary Liftin writes about a fictional Midwestern girl who breaks out on a television show aimed at teens and then marries a huge movie star tied up in an unusual religion.

But lest you think there’s any resemblance to anyone you might have heard of, forget it. Sure, there are some superficial similarities, Leah Greenblatt writes in her review:

But the strange, secretive religion her future husband is devoted to is called One Cell studios, not Scientology, and he jumps on the roof of a car to publicly declare his love for his young bride, not on Oprah’s couch, and a lot of other details (her hair, his height) could be anyone’s, which the book’s press materials are very, very careful to point out. So let’s all just be cool and agree that nobody needs to call their legal team, okay?

I think I know the answer to the hasty disavowals (like Liftin’s statement about which actress she had in mind for her novel: “It's really pulled from all of the tabloids and this tabloid culture that we all absorb.... It's not about a specific celebrity but all the drama we see play out every week in the gossip magazines.”) — nobody wants a lawsuit from Cruise, Holmes or the Church of Scientology on their hands.

But why are we so obsessed by the romantic life of Cruise, who may – depending on which gossip site you read – be on his way to a fourth marriage with a young, British-born personal assistant?

Well, for reasons we can’t figure out, despite a saturation on all media fronts, new and old, fascination with celebrity just continues to grow. And Cruise has pulled off the unusual trick of staying bankable – whether in action-movie sequels or serious dramatic fare -- since the ‘80s. The idea that someone as rich and famous as him would need help finding a wife is sort of head-spinning.

But the other context here is that arranged marriage – of which these may be a kind of, uh, eccentric version – has been part of human history vastly longer than the romantic marriage that currently reigns in the post-industrial West. And in a lot of the world, it’s still the rule. The Cruise rumors (and their thinly-veiled fictional counterparts) then become eerie throwbacks to the days when families made sure young people married well and to everyone’s — including the religious institution in charge's — advantage.

One of the most chilling and fascinating parts of Lawrence Wright’s Scientology exposé “Going Clear,” which Alex Wright used as the base for his chilling HBO documentary released earlier this year, is the story of actress Nazanin Boniadi – now probably best known from “Homeland” – who, as Wright writes, was tried out as a potential Cruise wife and later dismissed. (The Church of Scientology contests some of Wright’s chronicle; it is summed up here by Business Insider.) According to Wright, the actress was pressured in the early stages to break up with her boyfriend. When she refused, he says the Church presented her the next day with a dossier of his cheating. (That relationship ended pronto.)

The mind reels contemplating the whole story of this and the other failed attempts to get one of the world’s most eligible bachelors a "suitable" wife. And you don’t have to read the tabloids to be fascinated by them. One day, maybe these rumors will be put to rest as the real truths comes out — one way or another.