“When the people lead the leaders will follow”: Can activists reverse Obama's disastrous Arctic drilling decision?

Obama's Climate Action Plan reassured us he was tackling climate change. Then came the opening of the Arctic 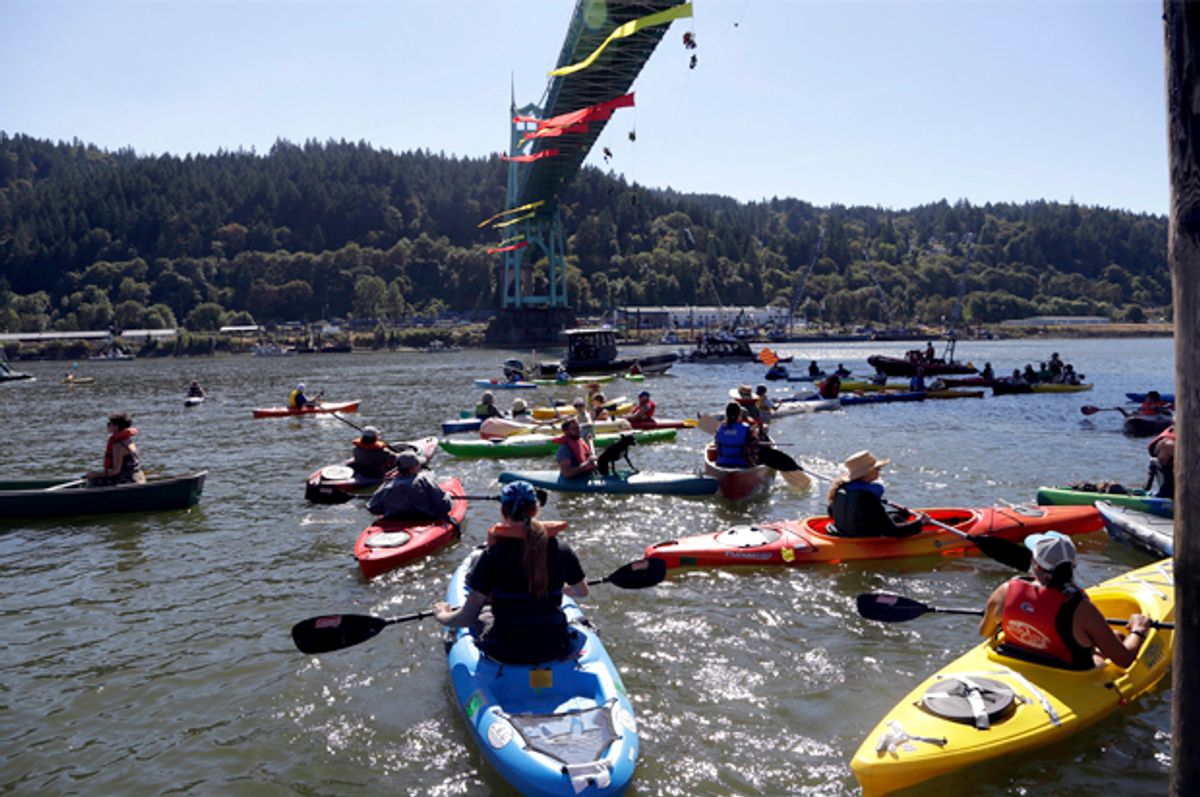 President Obama’s historic Climate Action Plan, which was announced on Aug. 3, focuses on reducing carbon dioxide emissions from U.S. power plants 32 percent over the next 15 years, promising real leadership heading into the U.N.’s Climate Summit in Paris this December. And then on Aug. 17 the president permitted Shell Oil to begin exploratory drilling in the Arctic Ocean.

It’s hard to understand the logic by which this administration aims to reduce carbon outputs while encouraging massive new inputs from oil development, not only in the newly opened waters of the Arctic Ocean (opened by sea ice loss linked to fossil-fuel-fired climate change) but also along the crowded Atlantic seaboard. These are two high-risk enterprises; in the case of the Arctic, there's a 75 percent chance of a major oil spill in the future according to a study by the Department of Interior, which is nonetheless permitting Shell’s drilling.  And, of course, a BP type disaster along the populous Atlantic seaboard, with its diverse ocean economy, is something no one wants to contemplate -- although we’ll have to if present plans for exploratory acoustic surveying, leasing and drilling continue to move forward.

The contradiction between reducing greenhouse gas emissions while seeking new carbon energy offshore hasn’t gone unnoticed by the world’s other major greenhouse gas emitter, China.  Four days after the president’s Aug. 3 announcement the deputy editor of the China Daily U.S. edition, which translates China’s official policy and news perspectives into English, wrote a biting column charging the U.S. with “hypocrisy” over carbon emissions, citing its planned new offshore drilling and insisting that if China commits to carbon reduction (in Paris) it won’t be because of U.S. leadership but because of its own air pollution.

A study based on the president’s EPA draft climate plan from last year indicates that while the regulations for coal-fired power plants would reduce greenhouse gases by some 2 billion tons a year, there could be upward of 60 billion tons of greenhouse gases released from the drilling and burning of all the industry-estimated offshore petroleum to be leased starting in 2017.

At the same time, a report in the journal Science states that the only way to avoid catastrophic climate impacts associated with projected warming above 2 degrees Celsius is to leave at least 80 percent of known coal reserves and 30 percent of known oil reserves in the ground and under the seabed. That’s what California has chosen to do since the first Santa Barbara oil spill of 1969.  When I asked Secretary of Interior Sally Jewel why the administration was not going to offer federal leasing for already known reserves off California and the West Coast she more or less admitted the whole process was political, stating, “If the states don’t want it, it’s more likely you’ll concentrate where they do.”

Still, whatever some pro-oil governors in the Southeast may want (drilling is now being proposed from Delaware to Florida), we should be concentrating on what a competitive U.S. economy actually needs to move forward. Any new offshore oil finds will guarantee continued fossil fuel use, a formula for disaster; but if meaningful climate agreements come into effect after Paris, it could also mean hundreds of billions of dollars in stranded assets (unused oil reserves) for the energy companies and a more disruptive transition from coal and oil, the energy systems of the 16th and 19th centuries, to the clean energy revolution that will define this century. So what will it take to focus on a real and practical energy policy?

At the 1992 U.N. Earth Summit in Rio, where initial plans to reduce greenhouse gas emissions led to the failed Kyoto protocols, I witnessed a march by 30,000 local residents and global environmentalists behind a banner carried by Buddhist monks with cellphones that read:  “When the people lead the leaders will follow.”

Today, citizen activists are mobilizing against offshore oil, from the bridge-hanging and paddle-waving Kayaktivists of Seattle and Portland, Oregon, who targeted Shell’s Arctic drilling this summer, to concerned coastal residents up and down the East Coast where some 60 towns and cities have passed resolutions opposing any new acoustic surveying and drilling, to a growing Sea Party Coalition that plans to make offshore drilling a major issue -- the Keystone Pipeline of the seas -- in primary states and presidential debates during the 2016 election season.

This movement should not be confused with NIMBYs or, more accurately, NOBOs (Not on My Bay or Ocean).  While vehemently anti-oil pollution, the Sea Partiers are also pro-jobs and green power, advocating for the emerging clean energy sector including solar, hydro and on- and offshore wind where appropriately situated.  After all, no wind spill ever destroyed a beach or a bayou or in any way damaged the blue in our red, white and blue.

David Helvarg is an author and executive director of Blue Frontier, an ocean conservation and policy group.  His latest book is "Saved by the Sea – Hope, Heartbreak and Wonder in the Blue World."