When we are all allowed to fail like white men: Here's a practical model to solve Hollywood's diversity problems

Individual acts of resistance, like those from Meryl Streep, Ava DuVernay and Rose McGowan, only go so far 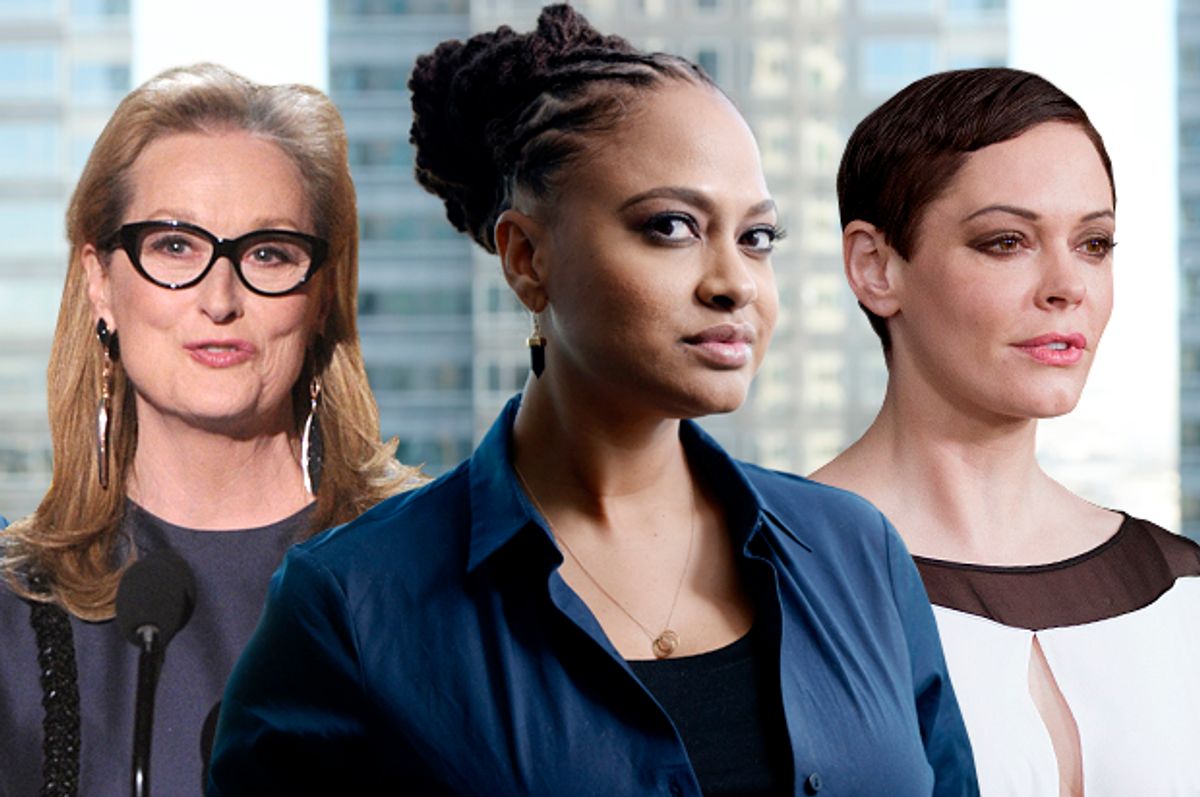 “Making a bad film should be every director’s right, not a privilege,” said no one, ever. At least, no one ever really said that until the recent gender equality initiative in Europe inspired Isabel Castro, the deputy executive director for the Eurimages film fund to make a much more eloquent version of that statement to ScreenDaily. Castro cites statistics that show women are attending film school in equal numbers to men, but are often discouraged from directing. And for those few who do go on to make a film, there’s another big drop in numbers that suggests if the first film is not a success, they are not given the opportunity or encouraged to make another. "Things will improve when women are allowed to fail as much as men," Castro says. It seems that in the European film industry—to borrow from the great Rowan Pope, among others—women have to be [at least] twice as good to get half of the directing opportunities. This is not equality.

And obviously, this is not a problem unique to Europe. We are approaching a tipping point for women in Hollywood, both in front of and behind the camera. Prominent actresses are speaking out about the blatant and common sexism they experience, and we are seeing more initiatives to push for equality. There’s Meryl Streep’s lab for women screenwriters over the age of 40, Ava DuVernay’s AFFRM (considered to be more of an initiative for filmmakers of color, but is really a push for gender diversity as well), Film Fatales, the pUNK Film Femme Lab, the Bechdel Test Fest and many others. We have individuals like Amy Schumer, who is no longer just a comedian, but a movement; we can use her sketches to map out a plethora of gender issues in Hollywood and beyond. “Last Fuckable Day” and “Football Town Nights” will hopefully go down in history as two poignant, hilarious middle fingers directed at some of our society’s biggest and most widely accepted attacks against women.

But Castro’s words remind us that the excitement surrounding Schumer’s success is also a symptom of a problem. For every Schumer, we should have at least five or 10 other female comics with their own shows, who are not going to go down in history. For every Kerry Washington, we should have five or 10 other black women leads on network TV shows that aren’t as popular as “Scandal.” For every Meryl Streep, we should have a slew of women over 50 who aren’t Oscar-nominated practically every year, but still get to do good work in Hollywood. This is what equality would look like.

Instead, we have what Europe has: such industry-sanctioned sexism that years after their first gender equality initiative in 2009, another declaration has been drawn up at the Sarajevo Film Festival. What’s the difference between the two statements, other than six years? The language of the first document was incredibly vague, calling for non-specific “initiatives,” “gender mainstreaming” and unnamed “strategies.” This year’s document seems to acknowledge its past failures, literally asking in the title “Can we do better?” Another unique point of the initiative (fully titled “Women in today's film industry—gender issues. Can we do better?”) is that its tenets are directly addressed to the Eurimages Fund, which has, for the last few years, been building on the work of the European Women’s Audiovisual Network to analyze data on the role of women in film. They are now being tasked by the panel with taking that data, and actually making a difference. Here are some of the proposals:

“- develop and apply appropriate measures for reducing inequality and improving gender balance in decision-making posts in the industry and within selection panels, institutions for education and training, juries, festivals etc., in particular by enhancing prospects for women; by encouraging experienced directors and producers to act as role models and inspire younger generations (master-classes); supporting training initiatives helping women to assert themselves within the industry (seminars, coaching, summer courses in co-production); and creating a development prize to be awarded to a female scriptwriter/director during a festival;

- enhance the visibility and recognition of female filmmakers, welcome their work and celebrate their successes, in particular by setting up a prize at a festival and organising a season of screenings in collaboration with a relevant theatre network;

- raise awareness of the status of women in film, both as regards on-screen representation and in professional terms, in particular by: organising conferences and round-table discussions on equality-related topics and meetings between institutions and professionals; publishing studies and reporting on their findings; and identifying, collecting and disseminating examples of best practice among all stakeholders;

- encourage film-makers to be more sensitive to on-screen female representation;”

You can read the full declaration here.

These may sound like simple concepts, but by asking for self-assertion seminars, for women to play more roles at film festivals, and by suggesting more master classes and prizes, the European film industry shows how gender equality begins on the smallest levels. They’re also acknowledging that, before you even address how women are presented on-screen, you must go behind the scenes to those “decision-making posts” that are at the root of many of these problems.

Of course, none of this language ensures that a change is gonna come. There is, unfortunately, such a thing as lip service, and it’s too soon to determine if this declaration is something Hollywood should — or even can — try to mimic. The Hollywood Reporter notes that, because the European Film Industry is largely publicly funded, they can “take more direct action to address gender imbalance,” than Hollywood. This means we may have to depend on individual initiatives and revolutions (like Rose McGowan’s), and perhaps this investigation into gender discrimination from the ACLU for moves in the right direction.

Today, many women still feel lucky to even make a film, or to even become a TV showrunner, or to get a complex on-screen role in either medium. It’s not exactly the same, by far, as being the only black person in a fancy, predominantly white school, but there seems to be a similar message, where women are told, “Just be happy to be here, because we let so few of you through this door. And also, you better be amazing at this, otherwise people might decide to not let another one of your kind back in.” Let’s seriously consider for a moment the fact that an actress like Viola Davis was desperate for a role like the one she finally got on “How to Get Away with Murder.” An actress so ferociously talented that she was Oscar-nominated for a film in which she was featured for only 10 minutes should not be desperate for anything. And if that’s the best we can do for a two-time Oscar nominee, what about all of those actresses with far less clout? What we’re learning is that discrimination is happening to the very best Hollywood has to offer, which gives little hope to those struggling to get their foot in the door.

“Being in a failed relationship should be every person’s right, and not a privilege,” said no one ever. But director Dee Rees seems to say just that in “Pariah” (now on Netflix) her coming-of-age film about a gay teen who (SPOILER ALERT) gets her heart broken in the end, but at least got to have that very necessary experience so she can go on to do it again, or maybe find love, or maybe just become an incredible writer. That first failed relationship is a foot in the door, and it doesn’t necessarily matter what she does after, but it does matter that she’s given that space to fail—like all of the straight girls at school, who always find themselves at the center of the typical Hollywood bildungsroman. If we keep up with the rhetoric that states all members of the human race deserve equal opportunity to succeed, it implies that, if we’re given these opportunities and we don’t succeed, we’ve done something wrong. Perhaps we all, also, need to be given more chances to fail, and fail again—like so many men of privilege. Perhaps, that is equality.