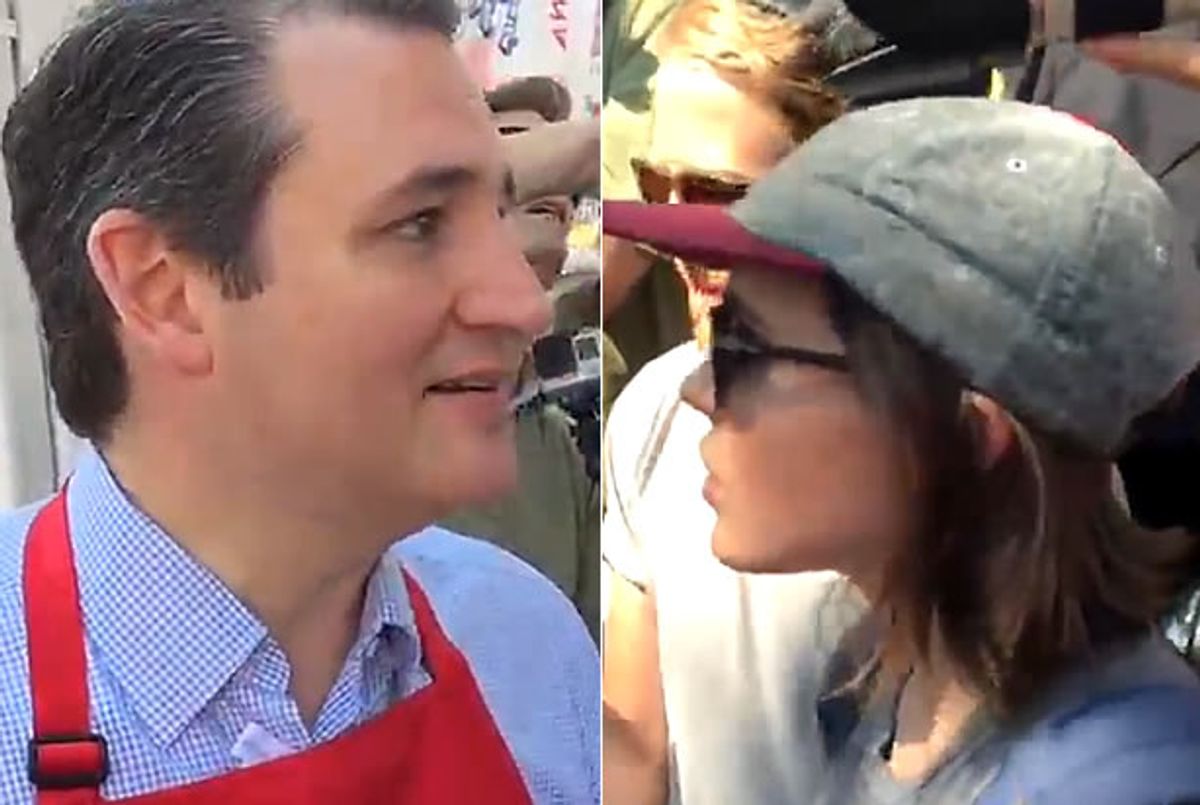 Texas Senator and GOP presidential candidate Ted Cruz was interrupted from his very important grilling duties at the Iowa State Fair by someone he clearly didn't recognize as Oscar-nominated actress Ellen Page, who asked him questions about what constitutes "persecution" in America today.

Page began by asking how he felt about "LGBTQ people being fired for being gay or trans," and Cruz responded that "what we're really seeing now is Bible-believing Christians being persecuted."

"Yes," Page replied, "for discriminating against gay and lesbian people."

"No," Cruz said, "for living according to their faith." He proceeded to rattle off the woeful tale of Dick and Betty Odgaard, who were fined for refusing to allow a same-sex couple to host their wedding in couple's church/bistro/flower shop/wedding venue. Page offered that people made very similar arguments "during the segregation era," but Cruz shut her down, saying "I'm happy to answer your question, but we're not going to have a back and forth debate."

As a large man in overalls leered over his shoulder, seemingly concerned about the hamburgers the senator wasn't flipping while talking about politics, Cruz compared the plight of "Bible-believing Christians" to "a Jewish rabbi forced to perform a Christian wedding," or "a Muslim imam forced to perform a Jewish one."

"We are a country," he continued, "that respects pluralism and diversity, and there is a liberal intolerance that says that anyone who dares follow a biblical teaching of marriage must be persecuted, must be fined, must be driven out of business."

Page pointed out that it was once illegal to be gay or lesbian in many states, a fact with which Cruz seemed unfamiliar. "Where was it illegal to be gay?" he asked, before realizing an opportunity to pivot had arisen, and that it was time to trot out tired GOP talking points about Iran and ISIS's treatment of gays and lesbians -- the suggestion being that LGBTQ people have it so much better here, so they should be grateful and shut up.

Which is, of course, exactly what Page refused to do, pointing out that it's American Christians like Scott Lively who are responsible for the "Kill the Gays" legislation in Uganda. Cruz responded by talking about Jamaica, then circling back to Iran and ISIS and asking her why she's not hectoring Obama about that.

"I'd love to talk to Obama about that," Page said.

"Then we agree," Cruz replied, before turning away.

Watch the entire exchange via ABC News below.