John Kasich and education reformers' dirty secret: How his "joke" betrayed their contempt for teachers 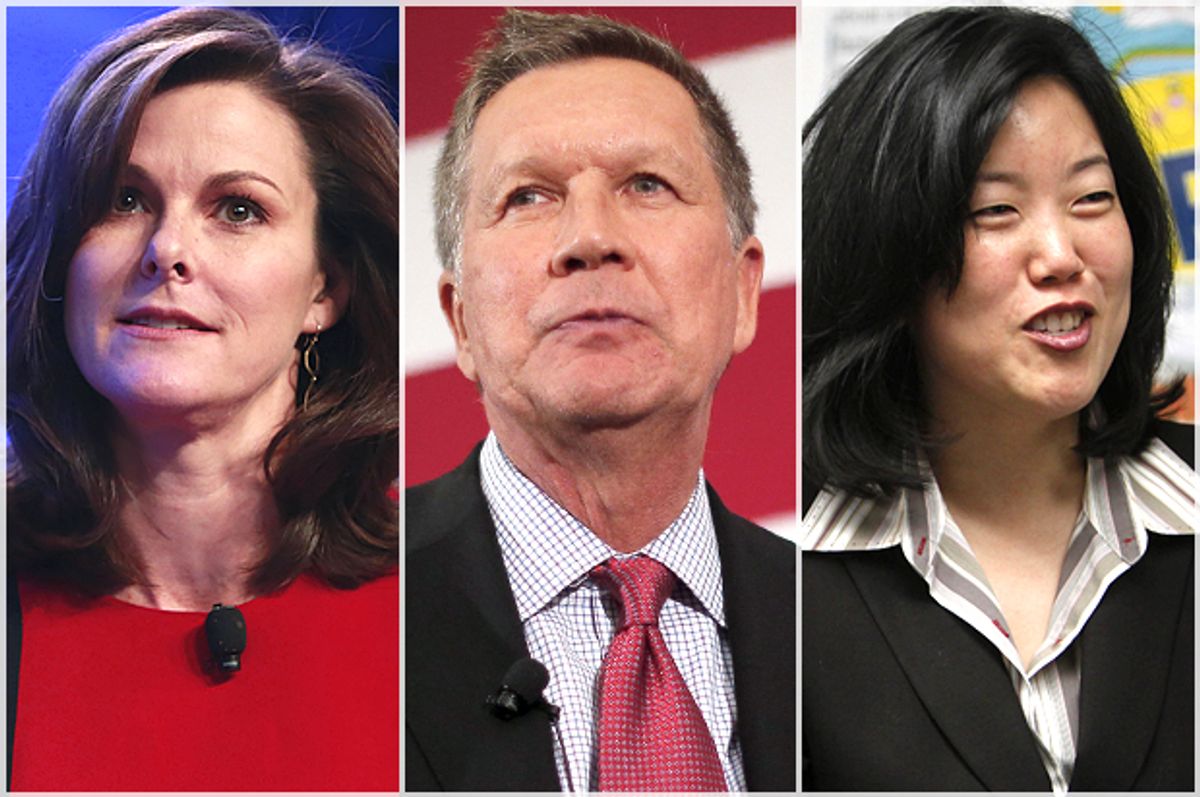 Among Democratic observers of the GOP presidential primary, John Kasich, the former Lehman Brothers executive and current governor of Ohio, is seen as the relatively sane one. And it’s not an entirely unjustifiable characterization. He gets all the credit in the world for overcoming conservative foes and expanding Medicaid, for example; and his stance on same-sex marriage, while still wrong, is admirably humane.

Still, as a not-very-funny joke about teachers that Kasich made in New Hampshire earlier this week shows, his ability to transcend the conservative movement’s default approach of sneering callousness has its limits. And for all his passionate defenses of Christian charity, the man is much more comfortable playing the role of benevolent patriarch than seeing the less-powerful organize themselves to demand they be given what they’re owed.

The joke in question, which was delivered during a Campbell Brown-hosted candidates’ forum on education, was about teachers’ lounges. Kasich is against them, largely because they cause teachers to “sit together and worry about ‘Woe is us.’” Kasich doesn’t like the idea of workers communicating with each other, apparently. Perhaps he thinks the strategy that successfully repealed his anti-union bill in 2011 was hatched during lunch block and over lukewarm cups of bad coffee.

Whatever the cause of his animosity for teachers’ lounges in particular, Kasich’s lack of faith in teachers in general was shared by his co-participants in the forum. New Jersey Gov. Chris Christie, for one, was all too happy to repeat a zinger that previously earned him some attention, telling Campbell that he had “no problem with saying that the teachers’ unions deserve a political punch in the face, which they do.” He also described the prospect of teachers’ unions being destroyed completely as “nirvana.”

Former Hewlett-Packard CEO Carly Fiorina, meanwhile, didn’t threaten bodily harm against unionized teachers, which was nice of her. But she did argue that the Department of Education should be audited, though how that would help children get a better education was unclear. “When Washington spends more money,” Fiorina declared, “the quality of the education does not improve.” The same was true, she said, of “spending money on mandated programs either at the state or the federal level.”

The idea that “choice,” rather than funding, was the secret to educational improvement abounded. And that makes perfect sense if we remember that Brown, the forum’s moderator, is a prominent friend of charter schools and foe of teachers’ unions. Louisiana Gov. Bobby Jindal certainly knew his audience. “One of the things that I’d like to see,” he said, “is universal choice.” That means replacing unionized public schools with anti-union charters, as Jindal has done for nearly every student in New Orleans.

There were other candidates there, too (Wisconsin Gov. Scott Walker and former Florida Gov. Jeb Bush, specifically) but they said little that differed from the anti-teacher platitudes and applause lines offered by the rest. Fundamentally, everyone seemed to agree that whatever problems existed in American public education — and all agreed that the system was in “crisis” — could be laid at teachers’ feet. Why they’d reached this conclusion, however, was less clear.

Which brings us back to Kasich, and his seemingly off-the-cuff joke about teachers’ lounges. Kasich and his supporters would no doubt urge us not to read too much into the comment; but there’s a grain of truth in every joke, as they say, and I think this case is no different. In this instance, the little bit of revealed truth pertains not to teachers themselves but rather to the way Kasich — who, remember, is supposed to be the normal one — views them. He seems to think they’re a bunch of whiners.

In other contexts, the right would describe this scenario as one in which labor needs to be “disciplined.” And if that sounds to you like a defense of a de facto caste system, that’s because it is. For Kasich and other conservatives, teachers serve a valuable role — but only as long as they keep quiet and know their place. The moment they step outside of their prescribed lane, they became the root of any and all systemic problems. Kasich is the reasonable Republican, all right. But only if you do exactly what he tells you.