No Chuck Schumer, no problem: The Iran deal is surviving despite the influential senator's protest

The Democratic leader-in-waiting's lack of support could've killed the Iran deal. It hasn't worked out that way 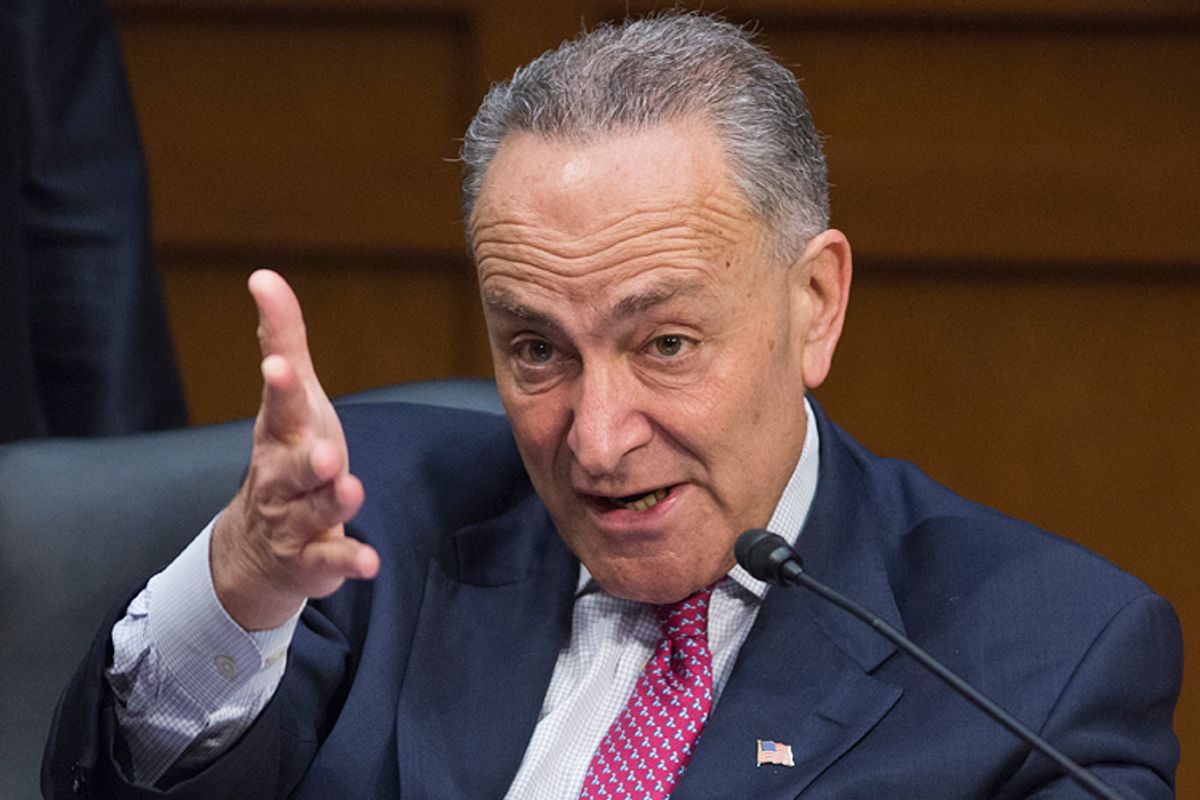 A lot of bets were placed on Chuck Schumer. The #3 Senate Democrat, whom his colleagues effectively chose by acclamation to succeed Harry Reid, was supposed to be the figure on whose shoulders rested the fate of the Iran nuclear deal in the Senate. If Schumer came out against the Iran deal, the thinking went, he'd offer cover for numerous other Senate Democrats to join him in voting for a resolution of disapproval.

Those seeking to use the Corker-Cardin framework to kill off the Iran deal in Congress will need 67 Senate votes to get such a disapproval resolution past the president's veto. (Even if they get that in the Senate, getting two-thirds in the House would be an even taller task.) Groups vehemently opposing the deal, like the American-Israeli Political Action Committee and the Emergency Committee for Israel, rested much of their strategy on persuading Schumer. Among other things, these opponents held a rally in Times Square to persuade a certain Democrat who represents Times Square in the United States Senate to reject it.

Noah Pollak, director of the Emergency Committee for Israel, explained earlier this summer how he hoped the Schumer strategy would play out.

“If Schumer comes out and says, ‘I looked at the bill and studied its details and think it’s a good deal and will stop Iran from getting weapons,’ there will be zero hope of overriding an Obama veto,” said Noah Pollak, executive director of the Emergency Committee for Israel, which funded a six-figure Web campaign targeting Schumer earlier this year.

“If Schumer says this doesn’t do it, it lifts the arms embargo and doesn’t have anytime, anywhere inspections, then we have a fight on our hands. He’s a linchpin or a bellwether,” he added.

Schumer eventually did come out in opposition to the deal. That he announced his decision the same night as the first GOP debate, when everyone was freaking out about how weird and funny that was, gave us an indication of how he would play this: he would keep his opposition to himself, and not lobby his Democratic colleagues to join him or go all over television ranting about it -- a major sacrifice for him.

The evidence so far suggests that Schumer was neither a linchpin or a bellwether for the deal: he was just Chuck Schumer, in a void. The latest Washington Post whip count lists 26 Senate Democrats who have come out in support of the deal. The only two Democrats against it are Schumer and Bob Menendez, who's long been the Democrat most critical of the Obama's administration's engagement with Iran and Cuba. Meanwhile, relatively conservative Democrats like Claire McCaskill and Joe Donnelly announced their support this week.

That means Senate Democrats only need eight more to assure that a disapproval resolution veto cannot be overridden, and there appear to be many more "gettables" on the list. If the supporters' ranks can grow to 41 -- meaning only one more Democratic defection can be afforded -- then Democrats can filibuster a disapproval resolution, ensuring that it never gets to the president in the first place. Either way, the deal goes through.

When Schumer's vote was up for grabs, we guessed that "perhaps [Schumer will] try to vote against it but quietly, without making much of an public messaging effort." That's what he's done. Schumer is savvy enough politically to understand that if he supported the deal, he might be in some personal political trouble (although it's hard to see a senator as entrenched as Schumer ever in serious danger), but if he took it upon himself to kill Obama's most significant foreign policy achievement, then he wouldn't look too good, either. So he's taking a free vote against the deal knowing that it will likely go through anyway. Fair enough.