R.E.M.'s "Fables of the Reconstruction" hit a major milestone this summer, quietly: A look back at the oddball album that never quite found its place in time

Why do we make a huge deal out of some anniversaries and not others? 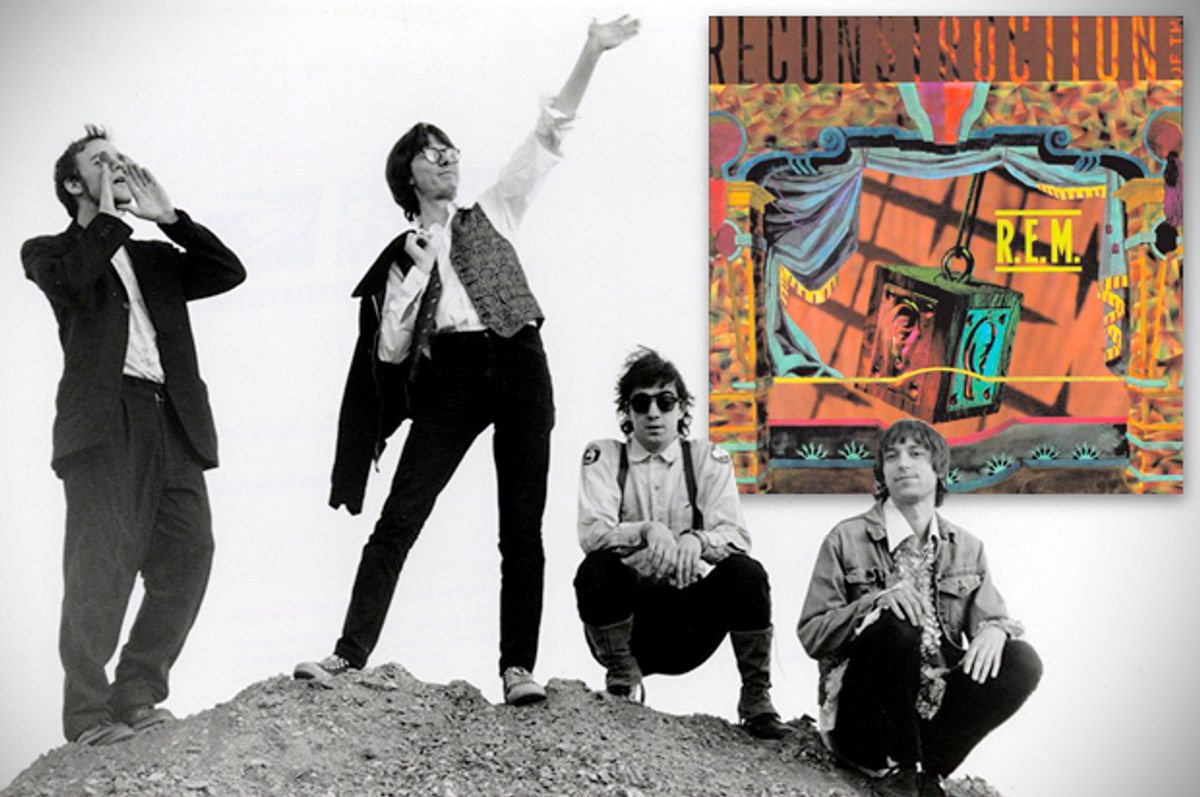 In early June, R.E.M.'s third album, "Fables of the Reconstruction," turned 30. The album anniversary came and went rather quietly: The band celebrated its release on Facebook, via archival videos and interviews, while a few scattered remembrance essays popped up around the web. However, the fanfare for such a milestone birthday was certainly much less than it was for R.E.M.'s first two albums, 1983's "Murmur" and 1984's "Reckoning." Partly this is because much of the "Fables" love emerged when a deluxe edition arrived in 2010 to mark the album's 25th anniversary. But partly this is because the 1985 release ended up being quite an outlier in R.E.M.'s catalog, one sonically and thematically quite different from the records that preceded (and then succeeded) it.

The band traveled to England to record the album with producer Joe Boyd (Pink Floyd, Nick Drake). Speaking to Salon earlier this year, bassist Mike Mills recalled this time working in "cold, alien London, which, in 1985, 1986, was a pretty strange place to be. … I enjoyed working with Joe Boyd, but other than that, that process was kind of difficult. It resulted in a great record and one that has as much its own sound as any record we ever did." (He wasn't alone in his discomfort: In 1991, vocalist Michael Stipe told Spin the "worst year of his life was when he was 25," which coincides with "Fables"' creation and release.) Indeed, after the warm tones and more inward-looking worldview of R.E.M.'s first two albums, "Fables" is a series of outward reactions to being in unfamiliar surroundings, of trying to find your bearings in a strange place.

On a song such as "Maps and Legends," this idea is somewhat literal -- "Maybe these maps and legends/Have been misunderstood," Stipe sings -- while on the restless "Driver 8," the idea of the unknown spurs loneliness and longing: "We can reach our destination, but we're still a ways away." The fragmented disco-funk of "Can't Get There from Here," meanwhile coyly plays with the idea of conflicting directions: On the verse, Mills sings, "I've been there, I know the way," as Stipe growls above him, "Can't get there from here." About as straightforward as things get is on the plaintive "Good Advices," when Stipe wails, "Home is a long way away." The vulnerable, yearning tone is a stark counterpoint to the sentiments of the "Reckoning" closer "Little America": The road-driven drudgery of "another Greenville, another Magic Mart" feels almost buoyant and novel, while the line "Jefferson, I think we're lost" is sung almost with a shrug. Being unsure of where you are is an adventure, not an emotional liability.

Yet the fragmentation of spatial and temporal relations on "Fables" is also a reflection of the disorientation present in the album's music. Production-wise, things lack the autumnal crispness of previous work; at times, it feels as if the music is being filtered through a foggy lens. (That's not an indictment of Boyd's style -- just another byproduct of the album's off-kilter stance.) Musically, things feel both sepia-toned (the casual banjo loping through "Wendell Gee," the simmering drums and churning rhythms of "Auctioneer (Another Engine)") and verdant (the curlicue riffs driving "Life and How to Live It," the shy jangle of "Green Grow the Rushes"). On opening song "Feeling Gravity's Pull," things feel intensely mysterious: Peter Buck's sparse, cascading guitar flutters like a flickering candle, and the song ends with a chorus of cello and violin.

Although there were hints of this murky tone on previous records (most notably the stark "Camera," from "Reckoning"), "Fables" has a musty, almost antique atmosphere that feels at odds with not only the mid-1980s, but R.E.M.'s entire catalog. That extends to the character sketches on "Fables," which feel like characters out of a faded children's book. There's "Old Man Kensey" and his sweetly misguided ambition, the ill-fated antics of "Wendell Gee," and the ephemeral girl in "Kohoutek," who disappears like the titular comet: "You were gone, like Kohoutek, can't forget that." The album deals with loss, regret, disappointment and grief by examining other people's lives, navigating how the sense of self -- and how people relate to others -- shifts when placed in an unfamiliar environment and facing uncomfortable truths.

"Fables" isn't necessarily immediately accessible, aside from the brooding jangle-pop of "Driver 8" and goofy "Can't Get There from Here." It's a record that's a bit standoffish, one a little hesitant to let listeners in -- at least at first. Yet there's something appealing about the album's vibe and atmosphere: It's as mysterious as "Murmur," yet feels enriched by even more layers of history and emotional burdens. "Fables" exists in its own tidy little universe that's never been duplicated or recreated anywhere else. Perhaps all of this explains why the album isn't necessarily the first choice for anniversary posts or gushing; it still feels like a hidden gem, something still waiting to be discovered.

Still, there are parallels between this album and other parts of R.E.M.'s catalog. More specifically, "Fables" was an inflection point in the band's career, much like how "Monster" became one exactly a decade later. After its release, the band started to shed its mystical Southern poet reputation and found the confidence to become more stridently political, and to leverage louder rock & roll and clarion vocals to speak up about political and societal issues about which they were passionate. In hindsight, it functioned as a bridge between the band's youthful mysticism and mid-career activist stance. Paradoxically, R.E.M. had to be comfortable feeling lost in order to find a new, surefooted way forward.