It's hard to pity victims of the Ashley Madison hack, but we still must grapple with serious ethical conundrums 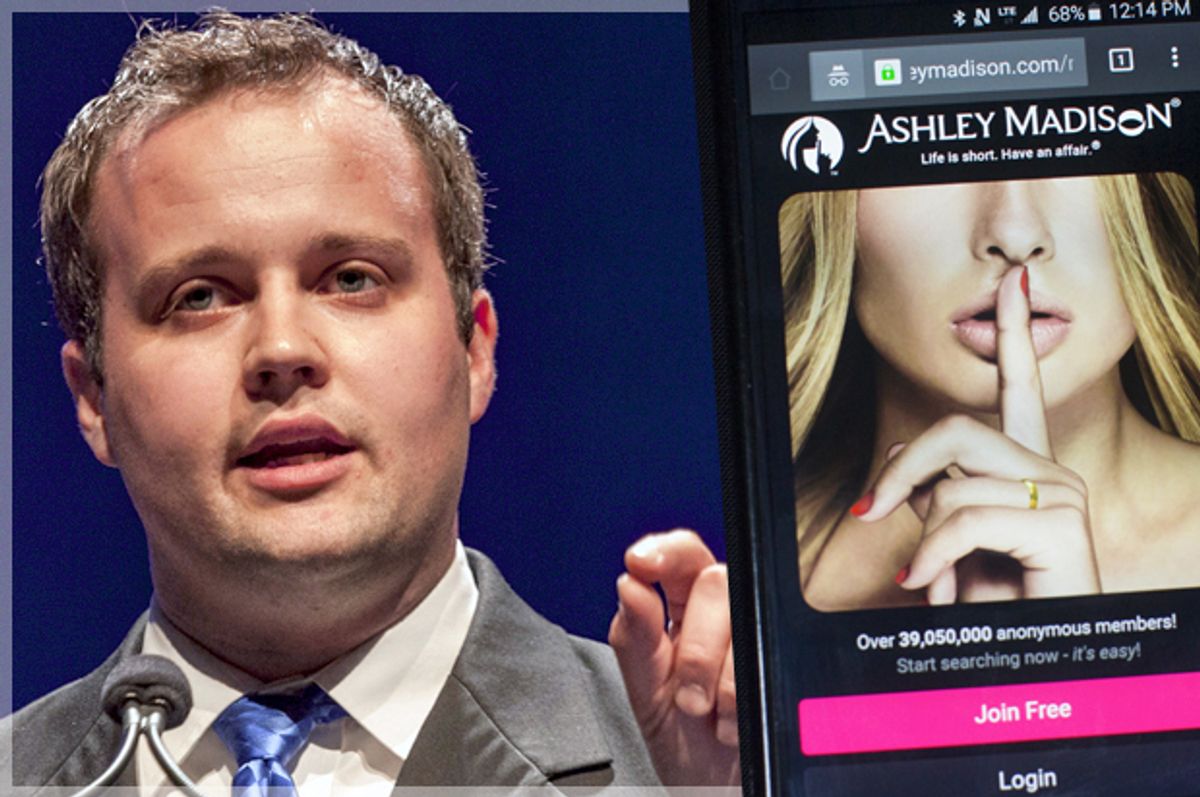 The hacking of infidelity website Ashley Madison has already claimed its first prominent conquest. Gawker looked through some of the tens of millions of the site's usernames dumped online and found an account linked to Josh Duggar, noted Duggar family member and an admitted molester of his own sisters. He's also married, making his online foray into cheating more awkward still. Gawker dutifully shared this information with the world. The next day, Duggar admitted that he'd been unfaithful to his wife and apologized, again. (Note to Mrs. Josh—now's the time to contact that divorce lawyer.)

It's unlikely that, apart from Josh and any other Duggars or Duggar enthusiasts still out there, anyone will be shedding a tear over all of this. But the Ashley Madison hack is yet more proof that we're in the midst of a great cultural and technological shift—one where hacking is the rule rather than the exception, and one where we all resign ourselves to such intrusions.

There is too much of our data swirling around out there for an enterprising soul not to snap it up and do something with it. The question for all of us, but especially for the news media, is: what are we supposed to do with all of this stuff when it's dropped in our laps?

Journalists last faced this dilemma when a huge trove of emails from Sony were released online. Well, I call it a dilemma but really it wasn't one: the media's near-universal view was, essentially, that if the information was out there, it would be foolish not to look at it. That's how we found out about everything from the racist emails being sent by top Sony executives to Ben Affleck's successful attempt to suppress information about his slaveholding ancestors from a PBS show.

As someone who wrote a story for Gawker based on the Sony hack, I'd be quite the hypocrite if I suddenly proclaimed my opposition to any of this—so don't worry, I'm not going to. These were very powerful people who shape the culture we live in. Just because their internal communication was put online and not sent in an envelope to the New York Times doesn't mean it's not justifiable to print. The media has always relied on rulebreakers in some form or another to get at hidden stories; this is just a new version of an old tale.

I'm not going to tut-tut over the Josh Duggar story, either. This is an open-and-shut case of moral hypocrisy. The Duggars have both preached about their own form of evangelical rectitude and attacked people who haven't met their invented standards, so they've made themselves targets.

Hanging over all of this is the fact that such decisions are increasingly out of the media's hands. As much as I may want journalists to exercise their role as the sensible guardians of sensitive information, we're well past the age when a news outlet could hope to maintain such supremacy. The Sony and Ashley Madison hacks were not just examples of our new relationship with technology. They also showed a media scrambling to keep up, lest the public's interest shifted to its new rivals for attention—the hackers themselves.

While I generally have no problem defending any of these stories from a journalistic standpoint, I won't pretend that the environment we now find ourselves in doesn't give me any pause at all. It feels like we're stumbling into a whole bunch of territory we haven't quite figured out yet.

For instance: the idea that public figures, like the Duggars or the Sony executives, are fair game is as solid a part of the media's foundational principles as you are likely to get. Yet the the question of who constitutes a public figure is an ever-shifting one, as Gawker found out when its targeting of a New York media executive led to the biggest crisis in its history. The site thought it was going after a public figure's private hypocrisy; most of the rest of the world begged to differ.

But that's a more minor point. Everyone's always disagreed about the journalistic decisions people make. And the broader question of what kinds of stories are in the public interest is also a bit of a blind alley. If Tom Hanks was found to be cheating on his wife through Ashley Madison, would that be so different from Us Weekly reporting it? We long ago decided that such things do constitute news, however sleazy that might make us feel.

No, the thing that really makes me queasy is that I'm not sure how I feel about our seemingly collective acceptance that this is just the way things are now. Maybe it's just that I'm having a hard time letting go of the idea that there should be some things that get to stay in the private realm, but why shouldn't I have a hard time with that? I don't know how comfortable I am with the notion that our right to privacy is obliterated the second that someone else tries to rip it out of our hands or puts it online. I think journalists are well within their bounds to comb through all of the Ashley Madison files if they want to, but I also think that we have the capacity to try and push back at the way the world is going. If we're going to get used to the fact that this is what we all do now, can't we at least acknowledge that that kind of sucks?