Republicans have latched onto a noxious far-right meme about undocumented immigration. But here's the truth. 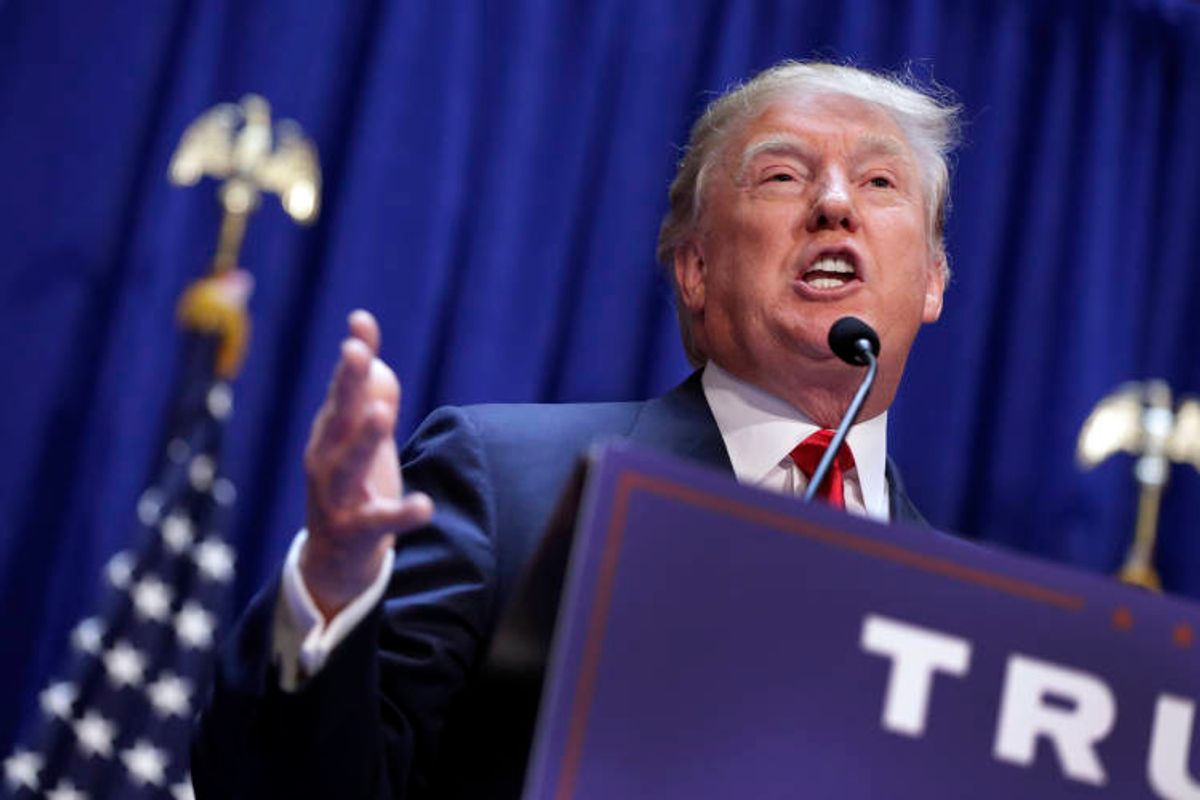 In recent days, Donald Trump and other Republican presidential candidates have begun using an ugly racial slur to describe the children of Hispanic and Latino origin who are born in the United States to undocumented parents:

The phrase is like a zombie for American conservatives: It lingers, never dying, ready to reappear during the presidential election season as political red meat to feed the xenophobic and racially resentful Republican electorate.

Of course, such language alienates Hispanic and Latino voters, the fastest growing voting demographic in the United States, but the imagery of invading hordes of Spanish-speaking brown people -- a group that conservatives imagine as a fundamental threat to “American values and culture” -- is foundational to white identity politics in the post-civil right era.

Indeed, in the Age of Obama, racism and conservatism are one and the same. And the Republican Party is addicted. Like all addicts, it cannot stop using their cocktail of symbolic racism and nativism — even when such behavior imperils their long-term political health and safety.

The slur “anchor baby” is potent because it summons images of people coming to a country where they do not belong, imposing themselves on it by having children who can make some unfair claim on resources, and by doing so to deprive the “original” and “rightful” residents of the land, jobs and wealth that is their birthright.

In America, a country founded as a Herrenvolk racial state, where the color line determined one’s freedom, the language of “anchor baby” cannot possibly be separated from the nightmare of white supremacy, of a democracy where human rights and citizenship were based on a person’s melanin count and parentage.

Like most racial slurs, “anchor baby” masks and obscures more than it reveals. In reality, the people who would eventually become the first "Americans," those white Europeans who, beginning in the 17th century, migrated to the colonies are the parents of this country’s first and true “anchor babies.”

The United States, like other countries, has crafted a set of mythologies and national lies that help to socialize its citizens into a shared history, culture, and identity. One of the United States’ most powerful myths is a belief that the nation was founded as a country “of immigrants.”

This is untrue. Like Australia, South Africa, and Israel, the United States was a colonial state made up of white settlers. The distinction between a “settler” society and one comprised of “immigrants” is very important. Immigrants move to a new space and then adopt the values of the people already living there. By contrast, settlers move to a new space, claim it as their own, and then impose their values and beliefs on the people who were already living there.

The United States, in its treatment of First Nations, as well as other people of color around the world, is a typical example of the settler-based colonial society.

To wit: Benjamin Franklin himself evinced and reinforced a belief in the need for white people to spread across the continent, taking land, laying claim to it, and producing white "anchor babies" to secure the racial purity and prosperity of a white nation in the making.

In his 1751 short essay, "Observations Concerning the Increase of Mankind, Peopling of Countries, etc.," Franklin wrote the following:

The number of purely white people in the world is proportionably very small.

All Africa is black or tawny. Asia chiefly tawny. America (exclusive of the new comers) wholly so. And in Europe, the Spaniards, Italians, French, Russians and Swedes are generally of what we call a swarthy complexion; as are the Germans also, the Saxons only excepted, who with the English make the principal body of white people on the face of the earth. I could wish their numbers were increased. And while we are, as I may call it, scouring our planet, by clearing America of woods, and so making this side of our globe reflect a brighter light to the eyes of inhabitants in Mars or Venus, why should we in the sight of superior beings, darken its people? Why increase the sons of Africa, by planting them in America, where we have so fair an opportunity, by excluding all blacks and tawneys, of increasing the lovely white and red? But perhaps I am partial to the complexion of my Country, for such kind of partiality is natural to Mankind.

White settler colonialists in America had eager libidos, urges that they used to rapidly grow the white population. In 17th century Andover, Mass., for example, white families had an average of 8.2 children. The average 18th century Southern white family had 9.6 children. This was a birthrate far higher than that of Europeans during the same era.

White colonists were determined to breed more "anchor babies" in order to develop and work the land they occupied in the “New World.” Between childbirth and colonization, the white population in the American colonies rose from only 250,000 in 1700 to 1.7 million by the end of 1770, an increase of 680 percent.

"Manifest Destiny," one of America’s other founding mythologies, was contrived in order to justify the displacement of the First Nations already inhabiting the continent, and to encourage the establishment of white dominion over other parts of the world. It was, in effect, a declaration of the white "anchor baby" as national (and international) policy. The first appearance in print of the phrase “Manifest Destiny” even summons the idea of God, and a command for white settlers to be fruitful and multiply as they spread out across America, displacing the brown people already there, stealing land, and committing mass murder against them.

Popularized in 1845 by influential journalist John L. O’Sullivan, the term “Manifest Destiny” became a national rallying cry for proponents of further westward colonization.  It captured and consolidated longstanding concepts from the Crusades and the Papal-sanctioned colonization process such as holy war, divine sanction, chosen people, promised land, terra nullis, and the proselytizing and conversion of heathens. As originally used in the US, Manifest Destiny was the idea that God had given the United States a mission to expand their territory throughout North America.

Three basic ideas underlie the concept of manifest destiny. First is a belief in the righteousness and superiority of the Christian moral values and institutions of the United States. The second is a belief in the responsibility of the U.S. to spread these for the benefit of the world and to fulfill God’s wishes. The third is the faith that God has blessed the country to succeed and every success confirms that blessing.

Because Manifest Destiny and westward expansion were national policy, white American elites combined the eliminationist policies of mass murder against the First Nations with a coordinated effort to ensure that white birthrates far outstripped those of the people they were displacing. Those programs were coupled with attempts to “breed” Native Americans out of existence through sterilization, intermarriage and cultural “reeducation,” The decimation of First Nations peoples and communities in America was the sum effect.

Manifest Destiny is solidified as part of America’s “national character.” But, today’s Republicans have amplified Manifest Destiny through their commitment to American militarism and never-ending war abroad, yearning for an American Christian Theocracy, and racism as electoral strategy; as well as with their embrace of the politics of white racial resentment, the Southern Strategy,  Birtherism and old fashioned “Know-Nothing” nativism.

The Republican Party’s embrace of the “anchor baby” meme is more evidence that it has abandoned any pretense to normal and responsible politics. Their use of such language is also a type of performance art, because the ridiculous serves as a substitute for serious thinking and governance. Indeed, the policies proposed by the Republicans to combat so-called “anchor babies” are so absurd and freakish that several of the party’s own presidential candidates could actually be disqualified from the presidency if these policies were ever actually adopted.

Movement conservatives’ eager deployment of the “anchor baby” meme -- and their solution of revoking birthright citizenship through a rewrite of the Constitution-- is in keeping with the Republican Party’s assault on the won-in-blood freedom of black and brown Americans. The “anchor baby” talking point is yet more proof that the GOP is a radical and destructive political force, one that actively embraces white supremacy.