Sex trafficking "happens in everybody's backyard": A survivor busts the biggest myths and offers advice on how to keep kids safe 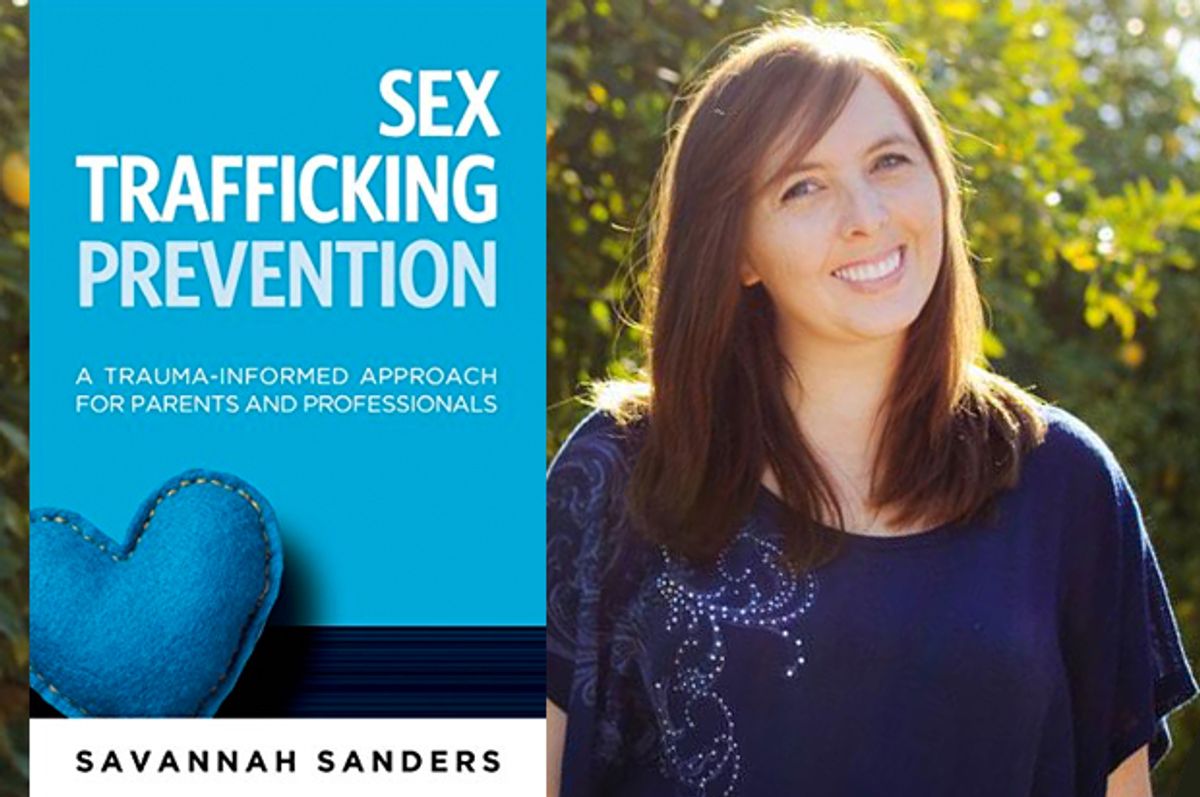 Savannah Sanders’s first encounter with sex trafficking at the age of 16 was as a victim. But during the years since, she has tackled this shockingly prevalent problem as an educator, a mentor, a social work student and most recently an author. Her debut book “Sex Trafficking Prevention: A Trauma-Informed Approach for Parents and Professionals,” to be published by Unhooked Books on September 1, weaves her plight together with research on the U.S. sex trade and advice for everyday people to minimize children’s vulnerability.

Sanders speaks in a warm tone even when discussing grave matters, joking about how her expertise in concepts like body safety — the practice of consent in every activity from tickles to hugs — has informed her approach to mothering her four children. Though she harbors no resentment about her past, she believes it was avoidable and is dedicated to preventing it in her own family and arming others with the knowledge to do the same.

I spoke to Sanders about the abuse she overcame, its psychological consequences, the patterns it illuminates about other survivors and how we can address the issue on a political, cultural and individual level. The interview has been condensed and lightly edited for clarity.

Could you start by telling me your own story? How were you first coerced into the sex trade?

I, like a lot of people, started experiencing sexual abuse at a pretty young age. I was raped and molested starting from six on. That left shame and guilt and all sorts of stuff in my life. I moved around a lot and dropped out of school in eighth grade and started cutting and running from home a lot.

I was 16 when a friend of mine took me to a club at night, and when I got out of the club, there was a guy out there who introduced himself to me and told me to come over the next day. When we got there, he told me I would be working with him. I was forced to work in a massage parlor and have all of the money taken by this guy for nine months.

How did you get out of that situation?

The police started doing an investigation on the massage parlor. I was told to leave before the police found me. I think they wanted me to leave so that they wouldn’t get in trouble, but I’m sure back then I most definitely would have gotten arrested for something. I got into more abusive relationships and started using drugs even harder. When I was 18, my grandmother had passed away, and I tried to stay clean for a little bit. During that time, I met my now-husband.

Has anyone ever blamed you for your victimization?

What did the people who said those things fail to understand?

That you're abused and trauma puts somebody in survival mode, and so they do what they have to do to get through to the next day. Most trafficking survivors have been going through trauma from very young ages.

What’s the relationship between childhood trauma and sex trafficking?

Mainly, there’s a lot of shame when somebody experiences sexual abuse or physical abuse, and so they act out and become very vulnerable to being picked up by other abusers. In our society, we see people acting out by cutting or using drugs or engaging in risky behavior, and instead of seeing those behaviors as a result of their trauma, we see them as rebellions. And that’s exactly what traffickers and various abusers look for because they know that those are the most vulnerable in the population.

How does your story compare to the stories of other sex trafficking victims in the U.S.?

I don't think my story's unusual. I do think, though, that trafficking happens in many, many different ways, that sexual abuse is a huge precursor to most stories but not all of them, that trafficking happens to boys and girls and that individuals at the highest risk are young girls of color, LGBTQ youth, homeless youth and kids who have been ostracized or taken into the foster care system. But anybody who has a pimp, whether they’re under 18 or over 18, is considered a trafficking victim by law. So a lot of times, people consider prostitution to be two consenting adults, but legally, if there’s a pimp, they’re considered a trafficking victim.

Where is the line between sex work and trafficking?

The line is the moment that anybody else is manipulating the situation, forcing, coercing or taking advantage of somebody in a vulnerable spot. I also think that there are many people who want to get out of sex work but don't feel like they have any viable options because they feel like they don't have any other skills.

What do you think of the recent Amnesty International proposal to legalize sex work, then?

Some people are even saying the policy could encourage sex trafficking.

I don't know if it'll encourage trafficking. It already occurs at an extremely high rate. It's such a big topic that there's no easy “yes” or “no” answer. The issue is so much broader than that. If we want to make a real difference, we have to address poverty and we have to address gender inequality.

What about the recently passed Justice for Victims of Trafficking Act of 2015? Could the increased government funding for victims make a difference in their lives?

I think there will be some changes, and I'm thankful that trafficking issues are coming up at a federal level. I don’t know what the long-term unintended consequences or ramifications of that bill are, so I wouldn't say I'm for or against it. It’s easy to think that when we've passed a law, we’ve made a change, but we don't understand the long-term consequences of that law. We’ll just have to see as time goes on if it’s really helping or if things need to be tweaked in order to make sure that we’re doing the best for victims first.

You mentioned we need to make changes broader than legislation. What are some society-wide transformations you’d like to see?

We need an array of services. We can't just be pumping up shelters all over the country and think that’s going to solve the problem. We need services that are unique and individualized and meet the needs of each person instead of trying to force them through a funnel. They need to be in control of their own change and growth. Shelters are very much needed, but so are specialized foster care and outpatient services that meet victims where they're at.

Somebody might not ever want to go into a shelter. We have this idea that if somebody doesn’t follow through with services, they must not want help. That’s rarely the case. Usually, the services just weren’t a good fit for that person. We can’t expect somebody who has been experiencing trauma their whole life to be healed by what we as a society deem successful. They need to be able to create their own success.

What can we as individuals do to prevent sex trafficking?

My book is about how to become a safe adult and support kids so that they aren't as vulnerable to being trafficked. People in my life didn't understand the effects of trauma, so they just thought I was acting out or being a bad kid. I think if someone had asked the right questions, there could have been a different outcome.

What are the most telltale signs of vulnerability to look out for?

Early childhood sexual abuse is probably the number one precursor to trafficking, and I think it's the number one sign people miss. The list of signs that someone has been abused really does go on and on: sudden change in behavior, bed-wetting, extreme aggression, hyper-sexualization. A lot of times, when kids are acting sexualized when they're younger, it's for a very good reason. And sexual abuse isn't always somebody touching them. It can mean being exposed to pornography at a young age, which is very common these days.

That’s interesting because I never thought of pornography as a source of trauma.

Kids aren't ready to be exposed to sex at such a young age, and it's very similar to being sexually abused. It takes away their innocence at a very young age. I know young girls ten and eleven years old who have been highly addicted to pornography. Young girls get addicted to pornography just as young boys do. I don't think that people really understand the effects that it has on their brains. And it's not just the hyper-sexualization that it causes; it's the violence against women, unrealistic body expectations, and shame.

What do you think is the most widely accepted myth surrounding sex trafficking?

That it doesn’t happen here. People don’t understand how prevalent it is in America. 83 percent of victims of trafficking in America were born in America, and it's the same in other countries. So, if you go to Mexico, 79 percent of their victims are from Mexico and born in Mexico. We have this misconception that it's a border issue. But it happens in everybody's backyard.