The sexy '70s, re-imagined now: The empowering seduction of "The Diary of a Teenage Girl," a coming-of-age fantasy that couldn't be set today 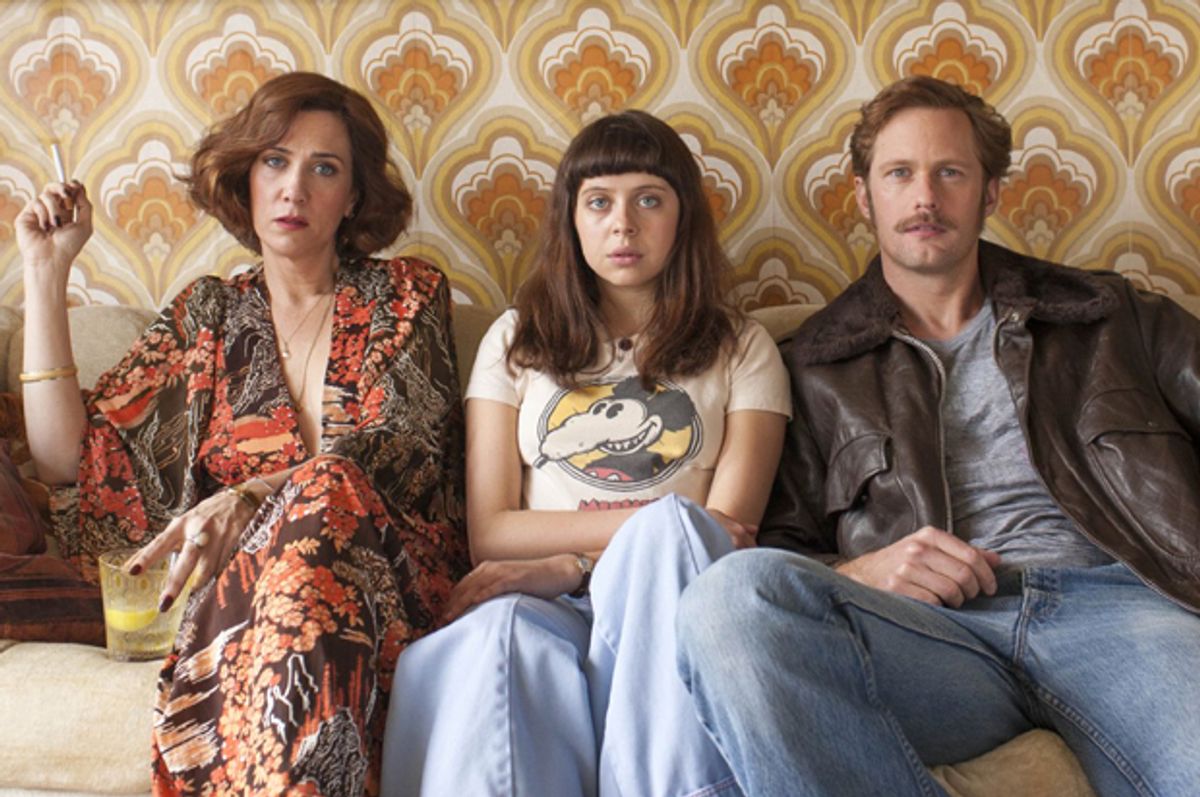 "I refuse to be a sniveling crybaby. I'm a fucking woman and this is my life."  So goes the battle cry of Minnie Goetze, the irrepressible heroine of “The Diary of a Teenage Girl,” a film widely lauded as a game-changing coming-of-age narrative. And the film should be praised for its unapologetic treatment of female desire as something to contend with. Of the best coming-of-age films, almost all star male protagonists, and those who are female tend to come of age through a sequence of unavoidable, often traumatic, events that happen to them rather than as a result of their own volition (anyone who jumps to “Juno” as an exception should fully consider the trauma of carrying a child to term and then giving that child away).

But in “Diary,” director Marielle Heller’s debut feature film, Minnie Goetze gets what she wants, when she wants it, a refreshingly frequent amount of time. For most of the film what she wants to get is sex — something the film approaches with a rare respect for the exigency of female desire, perhaps specifically the desire to be desired. Played by British actor Bel Powley, Minnie “gets to get” in a pool shed, hotel room, the belly of a sailboat, the back of a car. The perspective offered is patently female; Minnie is less objectified gamine than woman on the prowl for a good lay. Even the way she sees herself (as revealed in the film’s opening shot) is as a moving sexual agent: the lens looks up at her trousered booty as she strides surely forward. Given Minnie’s small stature, we know that this shot is how she imagines her body and sexuality as towering and powerful. I can think of few shots of a young woman’s caboose that carry such surprisingly positive connotations.

“Surprise” seems to be the operative term that many critics take. HuffPost’s Leora Tanenbaum asserts that “[t]he surprise of this movie … is that it portrays Minnie as someone in control of her body and her life — even when her surrounding circumstances may lead us to conclude otherwise.” That a female sexual coming-of-age can happen sans victimization might indeed prove a surprise to any fan of the genre; typically a girl becomes a “fucking woman” not through, well, fucking from a standpoint of desire, but through enduring any number of bad things that assault her body — having her period, suffering cramps (or cliques) or submitting to a painful, violent, or at least awkward loss of virginity. So Minnie as lusty protagonist comes as a welcome “surprise,” though it’s sad to admit that’s the case 39 years after 1976, when the film is set, a time when the FDA has finally approved a version of “female Viagra” for women with flagging libidos.

And it is in this gap of eras that the film really seduces. No matter how surprisingly willful its teenage heroine, “The Diary of a Teenage Girl” ultimately serves the seventies as sensual panacea to a 2015 consciousness. Set in a decade in which the economy sucked and crime was, in many cities, at an all-time high, the film presents a free-for-all of bohemian pleasures far from rampant urban decline — high schoolers get served at bars, entertainment comes through comic books or record playing and a single-mom librarian can afford a house in San Francisco. Even the porn projected in the background of parties (body hair! B cups! flesh jiggles!) seems innocent. Free of smartphones and selfies, these late-night festivities unfurl in a blur of soft focus and roving-camera reverie.

Flash forward and today seems prudish, even downright hostile to sexually adventurous young women. As pointed out last week by Amanda Hess in Slate, “the underlying sexual and technological panic” streaming from recent anti-Tinder-heads “looks remarkably similar to the Victorian version” over a hundred years ago. But staged against the enviably libertine seventies, the central controversy of “Diary” — Minnie’s affair with Monroe, her mother’s boyfriend, 25 years her senior — somehow seems a lot less reprehensible, less like statutory rape and more like just another break from taboo. “My life has gotten really crazy of late,” she gleefully boasts into her audio-diary early in the film after their first encounter. It becomes easier to accept, and even enjoy, the ensuing sexcapades between Minnie and Monroe amidst an Instagrammish scenescape of bellbottoms and tighty whities. It’s as though one has to displace her mind to a time she hasn’t lived through to entertain the illusion that the sex depicted is consensual, that the teenage girl is really the one calling the shots.

In the process, the potentially treacherous side of sex with men (rape, objectification, unplanned pregnancy) is almost entirely faded over in a haze of ringer tees and striped tube socks. Now that we've learned of how even the most wholesome of paternal icons carried out his sexually-predatorial behavior — many of the 50 women accusing Bill Cosby of drugging and sexually assaulting them first met him in the '70s — it's all the more tempting to revert to a version of the past in which women somehow weren’t as subjected to such perils. In a particularly cogent animated sequence in the film, Minnie imagines herself a kind of ravenous giantess, picking up tiny young men on the street and having her way with them — a clear reversal of the typical predator-prey relationship and gratifying to witness.

At the same time, nothing really permanently "bad" ever happens to Minnie, no matter how many close brushes with rock-bottom debauchery she has by the end; she and her best friend are depicted as powerful seductresses with Teflon hearts, and her failed affair with Monroe ultimately leads to a stronger relationship with her mother. It is fantasy by any stretch of the imagination — a fantasy all too seductive for those who can’t remember the ‘70s themselves, the viewers who grew up in the 1980s and 1990s.

“Childhood itself has changed greatly during the past generation,” write Greg Lukianoff and Jonathan Haidt in their recent article “The Coddling of the American Mind” for The Atlantic. “[K]ids were expected to occupy themselves, getting into minor scrapes and learning from their experiences. But ‘free range’ childhood became less common in the 1980s … many parents pulled in the reins and worked harder to keep their children safe.”

In “Diary,” Minnie’s freedom from such control would strike many audience members as downright foreign. Her parents barely monitor their daughter's life and her sexual (mis)adventures follow suit. But the parents aren't depicted as "bad parents" demanding our scrutiny; Kristen Wiig’s rendering of Charlotte, Minnie’s mother, is ultimately a warm one, if fettered by her denial of and response to her daughter’s affair with Charlotte’s boyfriend. Pascal, Minnie’s academic stepdad, is distant but clearly engaged; he buys his daughters espressos and questions their lives, pays for private schooling about which Minnie couldn’t care less.

Speaking to Terry Gross on Fresh Air on August 13, Phoebe Gloeckner, the author of the autobiographical book upon which the film was based, inserted a dose of reality to the aftermath of such freedom. Of Minnie, she says, “People used to tell me, God, you know, your family is so cool. You can do whatever you want. You can smoke pot at home, you can do this. And I would say, you know, I wish I lived in your house. I would've welcomed the chance to not have been allowed to do anything … I wanted to be just held tightly and controlled because it was — everything was so anarchical.” To younger Gen-Xers and Millennials, this anarchy holds its own onscreen appeal.

In April, Marcie Bianco wrote “8 Feminist Reasons We Know 2015 Is Just 1972 All Over Again,” and "Diary" feels of a piece with this persuasion. But 2015 isn’t 1972 all over again. If it was, films like “Diary” wouldn’t feel so openly, so sumptuously, escapist. Director Marielle Heller was born in 1979. I was born in 1979. I understand the compulsion to romanticize the period right before one was born; my students often do this with the early ‘90s. But as much as “Diary” celebrates the complexity of female desire, its perspective of the ‘70s can be too simple and sentimental. “This is for all the girls when they have grown,” concludes the voiceover at the end of the film, followed by a wistful shoreline scene that rolls with the credits. For all teenage girls who have grown, leaving the cineplex might prove a rude awakening.