"For far too long, people of color have been at the bottom of the pile": Why black churches are embracing the clean energy revolution

Rev. Ambrose Carroll explains why black churches are moving to the forefront of the environmental justice movement 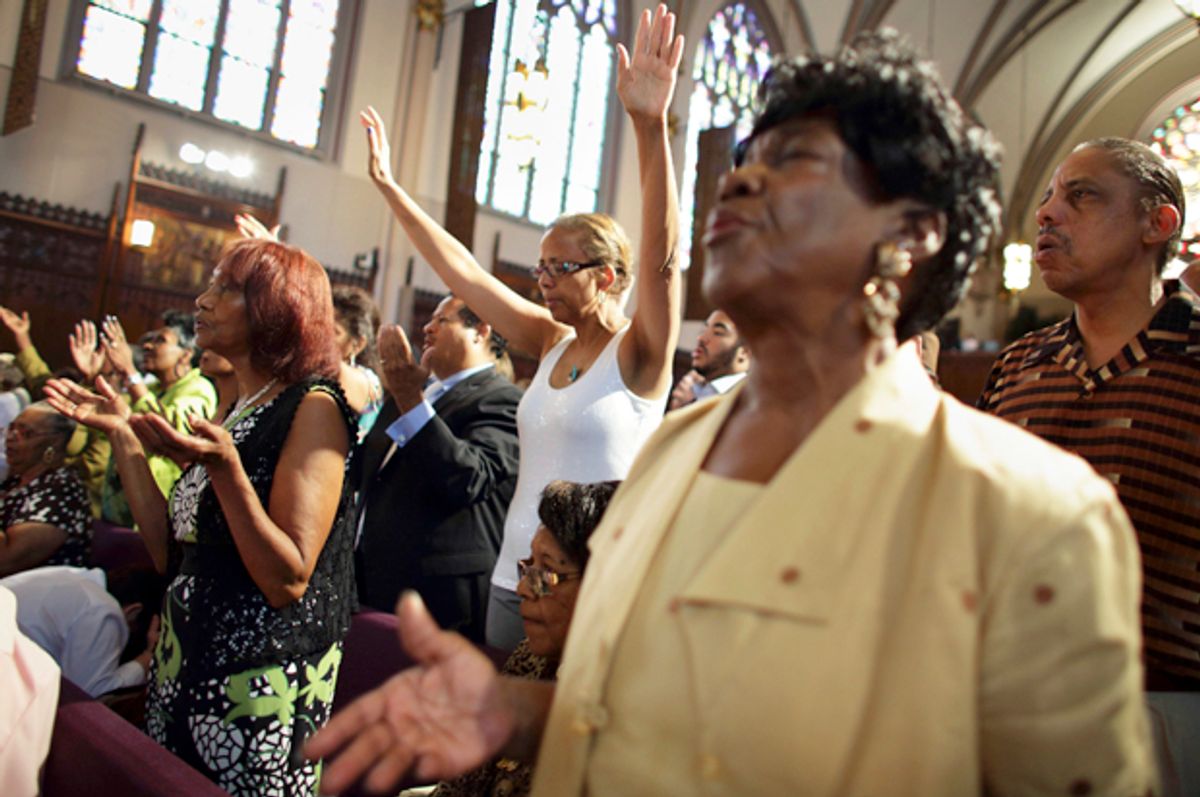 Low-income and communities of color are on the front lines of climate change. They have, for that matter, been disproportionately shouldering the burden of our reliance on dirty energy since the beginning: nearly 40 percent of the people living and breathing in the vicinity of coal-fired power plants are people of color; not unrelatedly, asthma rates for African Americans are 35 percent higher than they are for Caucasians.

Fighting climate change, and the energy revolution that doing so requires, is for many such communities a question of environmental justice. It's also, Rev. Abrose Carroll tells Salon, an incredible opportunity.

Carroll is the founder of Green the Church, a movement that's "tapping into the power and purpose of the black church" as a moral and social leader on climate issues. It's a project of Green for All, the organization founded by Van Jones to promote a renewable energy economy while simultaneously lifting people out of poverty, by empowering them to become a part of that charge.

This past week, African American faith leaders from around the country gathered for a three-day summit in Chicago. In the lead-up to the gathering, Salon spoke with Ambrose about why the climate movement needs the black church -- and how the black community is poised to benefit from the changes our planet so desperately requires. Our conversation has been lightly edited for length and clarity.

Perhaps you can begin by giving me a little bit of background on the Green the Church summit.

And I'll say that the number of pastors and congregants who registered for the event in Chicago, the number of people taking part in our worship experience, shows that this issue is important to us. And as we come together and begin to really categorize all of the positive things that people of faith in the African American community are doing for environmentalism, I think it will show a different picture than what has been viewed as a rather lackluster approach. I think that the black church is concerned about this issue, and that there's a lot being done.

And why center this on churches?

Well, I think this is a very large-scale social movement: I believe there is a paradigm shift taking place not just nationally, but globally as well, toward taking on climate change. And in the United States, there has been no social movement to be successful without the African American church at the table. It is true of the Civil Rights Movement of the 1960s, and we believe not until the church gets involved will the movement be what it should be.

This shift is occurring for very particular reasons; one just is the safety of individuals around the world. But then, all of our books of faith -- our bible, our teachings -- are all concerned with creation care, and care of the Earth. And so the church has a moral responsibility, based on the teachings of our faith, to be a part of this conversation.

That's the kind of thing we've also seen in the Catholic Church, for example with the Pope's climate encyclical. But as I understand it, there are also reasons you feel the black community, specifically, should be paying attention to these issues.

Of course. The African American community has always been very close to the land, and they've also been very sincere as a people of faith. So yes, as the pope talks about our spiritual and moral responsibility to take leadership on this issue, and about why it's important not just for the survival of man, but to our humanity -- to the fact that we cannot be all that we should be as human beings if we are unattached to the Earth -- we think that that's important.

As African Americans as well, though, living in inner-city and even some in rural areas -- we are people who come out of slavery, we are people who have worked the land, have been connected to the land, for the last 60 years or so, and in our urban environments, we have become so disconnected from the land itself. That is affecting or food consumption, what things we are putting into our bodies, because our urban centers are often places where there are higher levels of pollution and things of that nature. It stresses even more why we need to pay attention to these issues, and that our voices need to be heard. We have high levels of diabetes, of asthma -- a whole lot of issues that are affecting our life on the planet, and also the health of the planet.

In U.S. surveys, African Americans, and people of color, in general, are much more likely to say they believe that climate change is happening, and that they're concerned about its impact, than the general American public. Do you think some of these factors help account for that?

I think so. I've been in church meetings with 200 people, and we raised the same question: do we believe the climate is changing? And then we began to ask why. And of course, yes, living in West Oakland, we are in the midst of a five-year drought; we know that things are changing. But one older woman in the congregation said, "Oh, I know the climate's changing, because the tomatoes are smaller in my garden." And that struck me, because even in our urban environments, there are individuals who moved with the African American migration in the '40s and '50s, and they are still very tied in to the Earth, as they were before they left Alabama, Mississippi, Louisiana. It's just a part of the culture to pay attention to the natural order, and many come from that vantage point. I grew up in a household where people would tell you it was going to rain depending on how their knees felt. We're very connected to the Earth and to the environment, and I think that's why you have a larger percentage of African Americans saying that climate change is real.

I've seen a lot of attempt to tie some of these environmental justice issues into larger social movements, like Black Lives Matter. But they can seem less immediate, or perhaps more difficult to rally around, than issues like police shootings. Are there challenges in getting people to embrace climate change as a social justice issue? How do you work to make this part of the conversation?

Well you know, some people call them challenges; I really think that they are opportunities. A lot of our conversations -- Black Lives Matter, social justice issues -- they come with our voice coming to the table. I believe that being a part of this environmental and energy paradigm shift is that there's opportunity for some economic changes. I believe there are job opportunities, there are innovation opportunities -- we are alive at a time where how people are using energy is changing drastically. It is alike to the Industrial Revolution. And for us, as we look at our nation, I believe that not just African Americans, but people of color all over the country have an opportunity to think globally, and to be a part of the innovation that will take place, to empower our people.

Part of the conversation is: how do we move people from where they are into good-paying jobs? How do we help to get people out of poverty? That's a mantra of Green for All itself. We believe that for far too long, people of color have been at the bottom of the pile when it comes to using dirty energy. That we've been in places of pollution; we've been in places where there are a lot of trucks moving around. My family's from Louisiana, and even now, with all of the fracking going on, there's a lot of pollution even in rural areas. My hope, and my belief, is that with the new energy economy, we won't be at the bottom, but that we will be a part of the process of its growth; we will be a part of the innovation; we will be a part of not just having jobs, but job creation; and that we will be a part of communities that will affect change not just locally, but all over the globe.

I've often said that African Americans don't own a lot of buildings in our downtown areas, but if there's one thing that we earn, it's church buildings. We own our buildings of faith. And all of those buildings have to be retrofitted, have to come up to a new code. We believe that we can be a part of training workforces, and of coming up with new ideas, to be a part of this new energy society.

In a recent Huffington Post column, you mention also that this is a considerable voting block we're talking about. Are there specific policies that you're promoting, or things you're paying attention to either from local officials or the presidential candidates?

Definitely, we are in full support of President Obama's Clean Power Plan, and really want to be vocal in that we believe it is the right thing to do, that it really is good for our community, that, again, it gives us an opportunity to be a part of the growth cycle. And so those things we are supporting, and we are of course looking at candidates and how they posture around oil, around the old energy economy, and around how sometimes we kind of keep growth from happening, which I believe is a very uncapitalistic thing to do. I believe that there is now and will continue to be a great demand for clean energy, and so I think that we ought to at least follow the market on that and allow people to have it, and allow other communities to play new, innovative roles in being part of that growth.

Green for All was founded as an institution strong enough to lift people out of poverty. Things are changing, things are affecting us in a negative way. There is a necessary change, and we're finding that all over the globe: the governments in Asia and whatnot are saying we're going to work with clean energy because we have to. We have no choice. And I think that in America, we perhaps don't see it as harshly as others have in other regions of the world, but the "must" is just as explicit for us. So because it's changing, we have to engage and be at the table for the conversation -- engage as a nation and as a people -- to see how we can be served better in a new kind of economy.