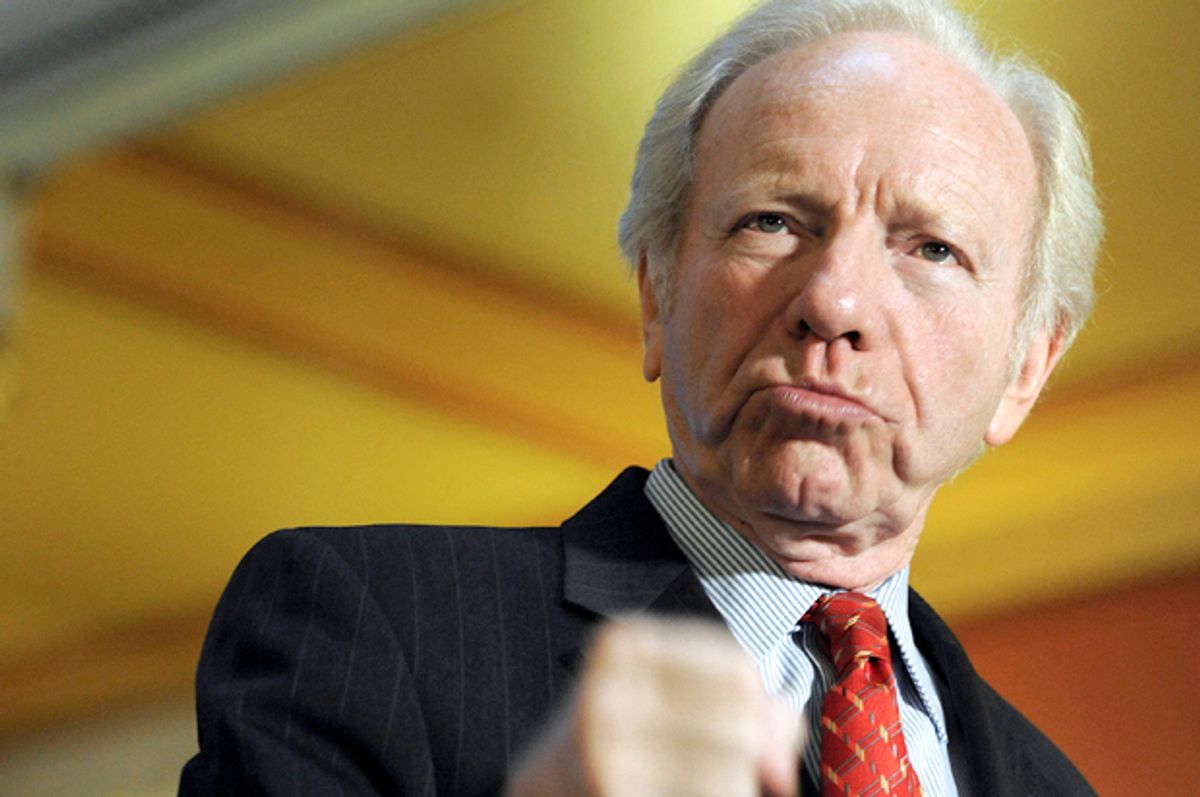 When I was 26, I was elected to the Connecticut State Senate from the 9th district, a swath of slightly Republican-leaning Hartford suburbs. We’re a small state --100 miles across, 60 or so up and down -- but due to robust gerrymandering, my 10th district seatmate was from New Haven, a city 40 miles from my home. He was the majority leader and in his last term. He was smart, funny and self-deprecating, and right away I liked him. His name was Joe Lieberman. Seeing Joe back in the news leading the charge against Obama’s Iran deal brings back memories; some good and some very bad.

As a freshman senator, I wrote or sponsored bills to bar investment in South Africa, give workers advance notice of plant closings, end job discrimination against the mentally ill and housing discrimination against families with children, help women get restraining orders against violent spouses, and require consumer contracts to be written in plain language. Joe was for all of them, in the end if not always at first.

He and I became friends; not real friends, but not what politicians mean when they call whoever’s next up on a speaking program “my good friend.” Fresh out of law school, with eight years of draft deferments under his belt, Joe had entered politics in the late `60s as a foe of the Vietnam War and a friend of measures to open up politics to women, minorities, and other outsiders. (It was not till the late `70s that reformers turned their gaze from party bosses to the big money guys who pulled their strings.)

From the first, Joe’s observant Judaism was a hallmark of his public persona. In an America that felt awash in people like Horatio Alger’s father -- whom Christopher Lasch described as “a man who knew both himself and God and usually elected to speak for both” -- some found Joe’s religiosity off-putting. But when Joe skipped state conventions to observe the Sabbath, I admired him for it. Joe hadn’t yet taken to advertising his close personal ties to the Almighty. I believed then, and still do, that a force for goodness animates the universe and if Joe did too it was fine by me.

In 1982, Joe got elected state attorney general, and he did what attorneys general do: hold press conferences to rail against polluters and assorted scam artists. As money flooded politics, governors stopped protecting consumers and soon every attorney general in America looked like Ralph Nader by comparison. The office became the best springboard in politics. In 1988 Joe challenged a real crusader, Senator Lowell Weicker. Aided by right wing Miami Cubans -- Lowell wanted to lift the embargo -- and arch conservative Anglos led by William F. Buckley, Jr., Joe won a squeaker.

It wasn’t just Cubans and Buckleyites who came to Joe’s aid. I did too. Friends on the left had been warning me off him for years by then but I didn’t listen. Weicker was vulnerable then on the environment. I knew lots of Washington enviros from my days working for the nuclear freeze. I made the case to anyone who’d listen that Joe was greener than Lowell. In a race so tight there’s no telling what damage I did.  I spent election night in Joe’s Hartford hotel suite. As the count dragged on I watched him sit quietly with his wife, calmly preparing to accept whatever fate awaited them. I thought what a rare politician this was who’d never be ruined by raw ambition because he saw life whole.

In the Senate Joe dove into government oversight and took up with the Democratic Leadership Council. The left hated the DLC. I was always of two minds about it. Pols used it as a vehicle for corporate fundraising. But DLC policy types tried to make government work better. I liked Al Gore’s reinventing government stuff. Obama’s later aversion to ethics and management reform cost him dearly; When DLC Dems pocketed its corporate contacts and ditched its management reforms they didn’t just throw out the baby with the bath water; they threw out the baby and drank the bath water and have been sick ever since.

By the late `90s, I saw Joe with different eyes, if still not clearly enough. As Gore cast about for a 2000 running mate, I spoke to press contacts made in my Clinton White House years and wrote Gore a memo extolling Joe’s virtues and some vices that only looked like virtues; in the aftermath of impeachment his late penchant for moralizing could prove a plus. His corporate-friendly environmentalism might inoculate Gore against attacks on his own stronger, clearer stands. Joe was a Jew and his nomination would be historic. Gore picked him and the instant effect was electric. Gore took a lead and for a second it seemed he’d never look back.

I watched from home the night Joe debated Dick Cheney. Going in Joe was deemed an asset for Gore while Cheney was considered a millstone round the neck of the trailing Bush. Cheney is a serial dissembler, a right-wing extremist and one of the premier warmongers of his or any other time. He was for cop killer bullets and leaving Nelson Mandela to rot in jail. The public already thought him extreme. All Joe had to do was strip away his thin establishment veneer. A question or two on Mandela or cops would have done the trick. No one asked him to be an attack dog, just to let people know who Cheney was. But Joe was intent on burnishing his bipartisan credentials. He and Cheney chatted the whole time like classmates at a reunion. When it was over, Cheney was rehabilitated and Bush was ahead. It wasn’t treason -- one assumes Joe wanted to be vice president -- it was ego.

Gore recovered, but not enough to keep Bush from stealing the race. Florida began what has since become a second great wave of voter suppression. During the recount, Republicans who’d deprived African Americans of the lawful exercise of their franchise asked to let in unlawful post-election ballots from presumably Bush friendly soldiers. Gore said no. Joe told Gore he’d say no too, but then told the press he “owed it to our troops” to say yes. This was treason, and Gore never forgave him. When Joe ran for president in 2004, Al leapt to endorse Howard Dean.

Democrats’ 2004 rejection of Joe is a textbook lesson in democracy. With residual good will from 2000, Joe started out ahead. But Democrats opposed the Iraq war, and along with New York Times columnist Tom Friedman, Joe was arguably one of the most important backers of the war not in the direct employ of the Bush administration. As Joe reaffirmed his support of the invasion, Democrats looked elsewhere. It wasn’t personal, not to the voters, who by and large still liked Joe. But in the months and years ahead Joe made plain it was plenty personal to him. That he thought he could desert his party on the issue of the day and still be its standard bearer suggests how his ego had swelled.

In 2006, Lieberman -- no longer “Joe” to me -- was primaried over the war. He lost the primary but ran as an independent and won. Before the primary, then-Sen. Barack Obama attended a Democratic dinner on Lieberman’s behalf, called Lieberman his role model, and said when he came to the Senate he asked Lieberman to mentor him. Lieberman said Obama would rise even higher and that he’d help him. But two years later, he opposed him, in the general election no less. Moreover, the guy who wouldn’t lay a glove on Dick Cheney in 2000 didn’t hesitate to go on the attack.

After Obama vanquished John McCain, Democratic senators wanted to punish Lieberman for this most egregious betrayal.  But Obama, anxious to burnish his own bipartisan credentials, intervened on his behalf. It says much about Obama’s bargaining skills, as well as his affinity for Lieberman’s views -- if no longer for the man himself-- that he asked nothing in return. He could have said to Lieberman, Vote as you wish on any bill, but promise me you won’t join a Republican filibuster of my highest priority, health care reform. He never did, not even when Lieberman was the 60th vote needed for cloture. Obama ran for president promising to enact a strong health care public option. It had passed the House and there were more than 50 votes pledged to it in the Senate when Lieberman demanded its removal as the price of cloture. Obama never even called, having long before traded away his own support of it in private.

Lieberman’s maneuvering on health care fit a larger pattern. He was the first Democrat to stand in Congress to condemn Bill Clinton’s liaison with Monica Lewinsky. His speech gave political cover to Republicans bent on impeachment.  After 9/11, he was a prime mover of bills to reorganize U.S. intelligence and homeland security that drew attention away from elected leaders who were the real problem.  (Years later, there’s still no one in command of intelligence, due to that law’s grievous defects.) He was also an architect of the “cap and trade” climate bill that turned a once-good idea into public policy mystery meat; an opaque disaster of a bill Republicans used to make climate change a joke.

But his signature role was beating the drums of war. The catastrophe of the Iraq War dwarfs that of the one he rode out at Yale all those years ago. A few ideologues thought to export democracy by military means and lied to do it, thus tainting the reputations of our military and democracy itself. Joe Lieberman was in the thick of it.

I think of all this as Lieberman re-enters the news. Earlier this month, the director of the biggest group opposed to the Iran nuclear weapons pact resigned, having come to the conclusion that it was a good deal after all. This created an instant need for a man with no learning curve. Lieberman, who sits on the boards of three groups fighting the deal, was a natural choice. So he continues his long rightward trek. He calls himself a centrist, but as Republicans grow more extreme, he follows along. He still dissembles. When he asks “How can you make a deal with a country that says they want to kill us?” he knowingly exaggerates the threat Iran poses to the United States. He criticizes inspections, knowing the alternative is none at all. He speaks of more sanctions and a better deal knowing the moment we walk away the sanctions regime and all negotiations are over.

When they aren’t torpedoing the Iran deal, Republicans are conning the country into a ground war with ISIS. In July, Lieberman pal Lindsey Graham called for sending 20,000 troops in. In the Iraq war hundreds of thousands of Iraqis and 4,486 Americans died. We spent eight years and two trillion dollars and can’t even call it a draw. But 20,000 more troops will do the trick? The Iran deal won’t undo all our past blunders. But it is a chance to start over; to choose the rule of law over the force of arms. This is surely where our security and the world’s peace reside.