You can't make "Game of Thrones" on a YouTube budget: Why "it's the best of times and the worst of times" for prestige TV

Sure, right now we're spoiled for high-quality shows — but an expert predicts why it might not last 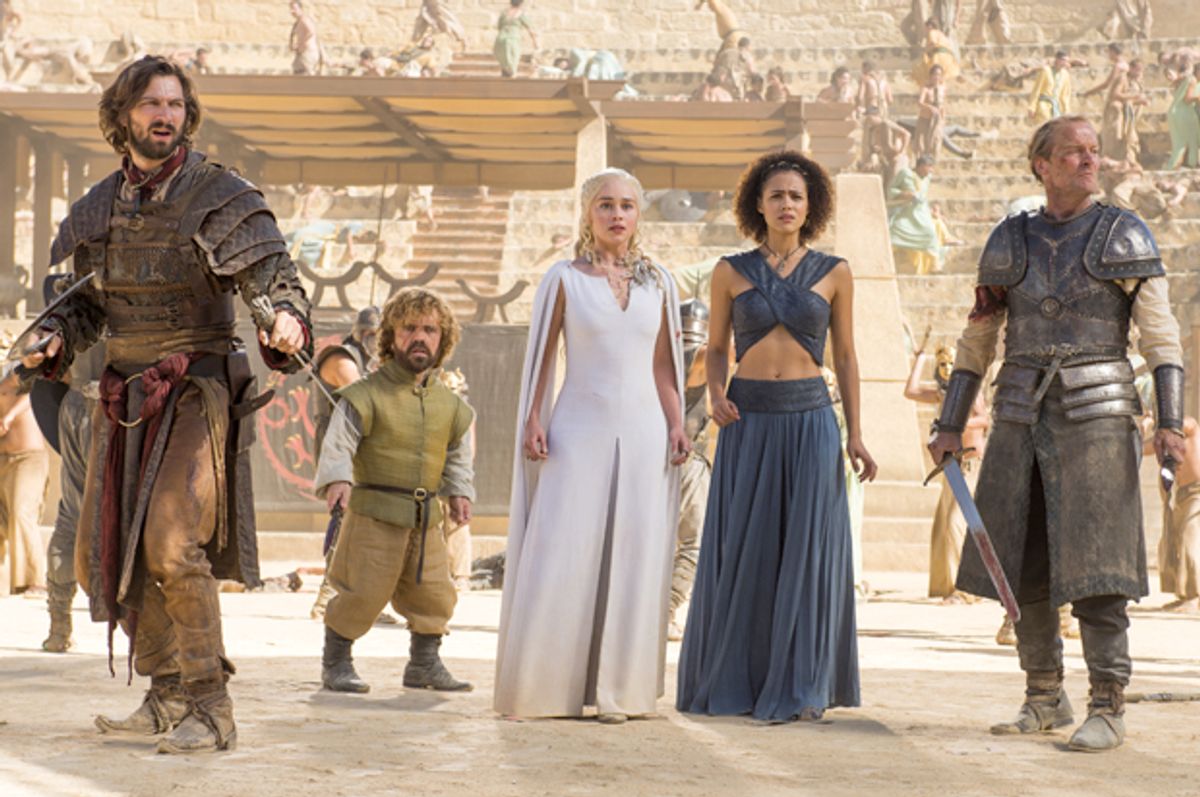 One subject that’s developed a kind of consensus around it – something fanboys and sophisticates, couch potatoes and cineastes, optimists and pessimists alike can agree on – is the superiority of today’s television. The business changed after “The Sopranos” in a way that allowed all kinds of good things to happen, especially on cable and streaming services, where shows as different as “The Wire,” “Orange Is the New Black,” “Breaking Bad,” “Mad Men” and “Game of Thrones” have dealt with serious social problems, showcased first-rate acting, looked at history in fresh ways, and accomplished all kinds of other storytelling feats that TV has rarely done as well. Some of these shows have been compared to serious novels and the great work of cinema’s auteurs.

Brett Martin, who wrote the definitive book – “Difficult Men” – on what his subtitle calls TV’s “creative revolution” – says things seem to still be going in the right direction. “It’s a lot of talented people doing a lot of great work,” he told Salon. “It’s giving money to people with talent and vision.”

But can the golden age last forever? Some observers wonder. At the recent television press tour, FX Networks CEO John Landgraf warned that we may be reaching peak TV, with the television business “in the late stages of a bubble. We’re seeing a desperate scrum — everyone is trying to jockey for position. We’re playing a game of musical chairs, and they’re starting to take away chairs.” The stock prices for television and media companies have fallen substantially in recent weeks, and insiders worry about cord-cutting, un-bundling, online viewing and piracy.

All of this sounds abstract, but the ability of networks to fund ambitious shows – most of them with very high production costs – has to do not just with a creative revolution, but an economic one. People pay for television in a way they rarely do for other forms of culture, and when they stop, so will the flow of great programming.

We spoke to Robert Levine, author of “Free Ride: How Digital Parasites are Destroying the Culture Business and How the Culture Business Can Fight Back,” about why TV has thrived, what makes HBO different, and the threats to the next generation of “Game of Thrones” or “Mad Men.”

Let’s start out with the fact that television seems like the most successful cultural form these days. How has it done better – made more money, employed creative people, improved at the level of quality – in a way that movies, books, music and other genres haven’t?

The reason TV has done the best is because of the way it’s sold. If you think of the way books or movies or music is sold, the dominant mode was always – and still is – that you buy what you want to see. In TV, you buy all of it.

If you [previously] bought four albums, you just then buy two. It was tricky, until recently – and still is – to buy half as much cable because it’s packaged. People complain about it: I pay a lot for ESPN and I’m not sure I’ve ever turned it on. But that created an incentive for [cable companies] to create shows with a lot of appeal for a small audience. You’ve had upward competition instead of down.

Many of the people running entertainment corporations came from the television divisions: It’s a reflection of how dominant TV became. These were once movie studios who picked up television channels: Now they’re entertainment conglomerates fueled by television. And movies are a small subset of that. Television drives revenue and profit.

Let’s break it down for a minute to one show. HBO has had an enormous popular and critical hit with “Game of Thrones.” What needed to go right, during this precarious period for other kinds of culture, for that show to be made? It’s got an enormous production budget by the standards of 20 years ago.

Some of these things that seemed like a niche became much bigger: Take “The Walking Dead”… I don’t think people thought it would become so successful.

In the ’50s, ’60s, and ’70s, it was pretty simple: x was the number of people watching, y is what you charged for an ad, x times y was the money you made. You had to get as many people to watch as possible.

Remember, too, the setting was different: When I was growing up, we had one TV in the den. What did we watch? It wasn’t what my dad liked best or what I liked best, but what we could all agree on. It wasn’t the lowest, but the broadest common denominator: What will the whole family tolerate?

Now there’s another screen, or you can watch it later. You get more different kinds of choices. There’s more good TV, more bad TV; there’s an explosion of niches. It’s not just that TV got smarter: TV got more everything.

So it was important, for “Game of Thrones” to be possible, that it was on a network that had a lot going on, and that people couldn’t use in an a la carte way. If you got HBO, you were paying a lot of money for a lot of programming: Some of them might work, some might not. But all of them helped fund the other, make either possible.

That’s true to some extent on every channel. But on other channels, there’s more need to justify every show: Show x needs to bring in y to sell z ads… HBO is more of a coherent whole, so there’s more of an urge to do prestige projects.

Same with Showtime and some of the other channels?

And same with Netflix and Amazon. And some of the other cable channels. HBO is now competing with Netflix, so it has to deliver more quality content than Nexflix – that’s a great competition. Amazon feels like it’s in the same place, and that’s gonna get a lot more TV.

Right now, it’s the best of times and the worst of times. Over the last decade or more, you’ve had a bunch of incredible incentives to develop a lot of interesting TV for specific audiences. That’s resulted in a lot of people rushing into that business. When HBO had “The Sopranos” and “Sex and the City,” there was nothing else like them. Now there’s a lot of sophisticated shows.

But people only have so much time. If you look at the comments made by the head of FX – I don’t know if we’ve reached peak television, but we’ve reached peak, quote unquote, quality television. There are only so many shows I can watch where I have to keep track of dozens of characters. And all those shows are considered more and more important; these expensive shows have good secondary markets – online, DVDs, overseas, airplanes, hotels, you name it. But how many of those can people watch?

Increasingly, you see quality shows with expensive development budgets get ignored in a way that might not have been five or 10 years ago. “Masters of Sex” is better than it is popular. “Sense8” is supposed to be really good; I’ve not gotten a chance to watch it yet. I think FX is doing a lot of interesting stuff. But it can be hard to get enough people to watch.

At the same time, you have a phenomenon where more and more people are watching this stuff online -- stuff you’re not paying extra for like FX and AMC. If you’re watching them online, they may not be making that much money on them. It’s the best of times because the current model is robust. But it’s the worst of times because we’ve probably reached peak TV. People are watching shows that don’t make those shows that much money. You saw a lot of downer movement in media stocks this week.

Look at Comedy Central: “Inside Amy Schumer” is a really cool show that a lot of people are watching, but a lot of them are watching it on YouTube – that doesn’t fund the watching of more shows. I don’t think anyone has really figured out what to do about that.

Is that the kind of thing that drove the stock decline?

Broadly speaking – that the cable model that seemed so strong and so good [may be weak.] A lot of younger people are not subscribing. And you can watch a lot of stuff online – perfectly legally in a lot of cases. That doesn’t bring in a lot of revenue.

There may be a way to produce “Amy Schumer” for an online audience, maybe. Definitely you could not do “Game of Thrones” that way.

So what happens when HBO in five years is getting two-thirds the revenues it is now? What happens to the expensive, high-end shows that they deliver?

The future may be pretty good for HBO. The question is, Will it be as good for Showtime [and others]? I have Netflix, I have cable, I have Amazon. That’s a lot of different TV. And there’s Hulu… How many of these things are people gonna subscribe too? Besides the money, what a pain in the ass. People might want one or two things and see anything else as a hassle.

So what does that mean for the sophisticated shows that people have gotten accustomed to? Does that winnowing pose a threat to them?

What’s gonna happen is what happened to movies: People will say, The really hard part is the marketing, let’s try to base this on a new factor. That needn’t get you “Ant-Man” -- “Better Call Saul” has a built-in audience. We’re already seeing some of this: The two biggest new AMC shows are “Better Call Saul” and “Fear of the Walking Dead,” because they have a built-in audience. That doesn’t have to lead you to mediocrity, but there’s a lot of pressure… People thought “Tyrant” was a good show on FX, or this Denis Leary rock ‘n’ roll show. But it’s a lot easier to do a spinoff of something.

When you have a rush into a profitable business, you tend to get an emphasis on marketing. You can spend a lot of money, or you can ride on things people know. Does Turtle from “Entourage” get his own show?

Remember “Joanie Loves Chachi”? It’s not like the characters were so unbelievably fascinating. It was, “Hey, we need to launch 10 new shows this year. The other networks are launching 10 new shows. What can we do to set ourselves apart? We can adapt something… Or find a story people already know and keep telling it.”

At some point, people will stop making high-end expensive shows.

So there’s so much stuff out there competing for people’s time, we might get a “Games of Thrones” – that had a fanbase from the books – but we might not get “Mad Men” or “The Wire,” which don’t have immediate name recognition.

It’s not that we won’t get it. But it will be harder. And even if you do everything right, you can have business problems. Why? People are watching stuff online. If you have to do these shows on a YouTube budget, it’s gonna be really hard.