Trump is banking on support from the South. But he hasn’t decided whether he’s Richard Nixon or George Wallace 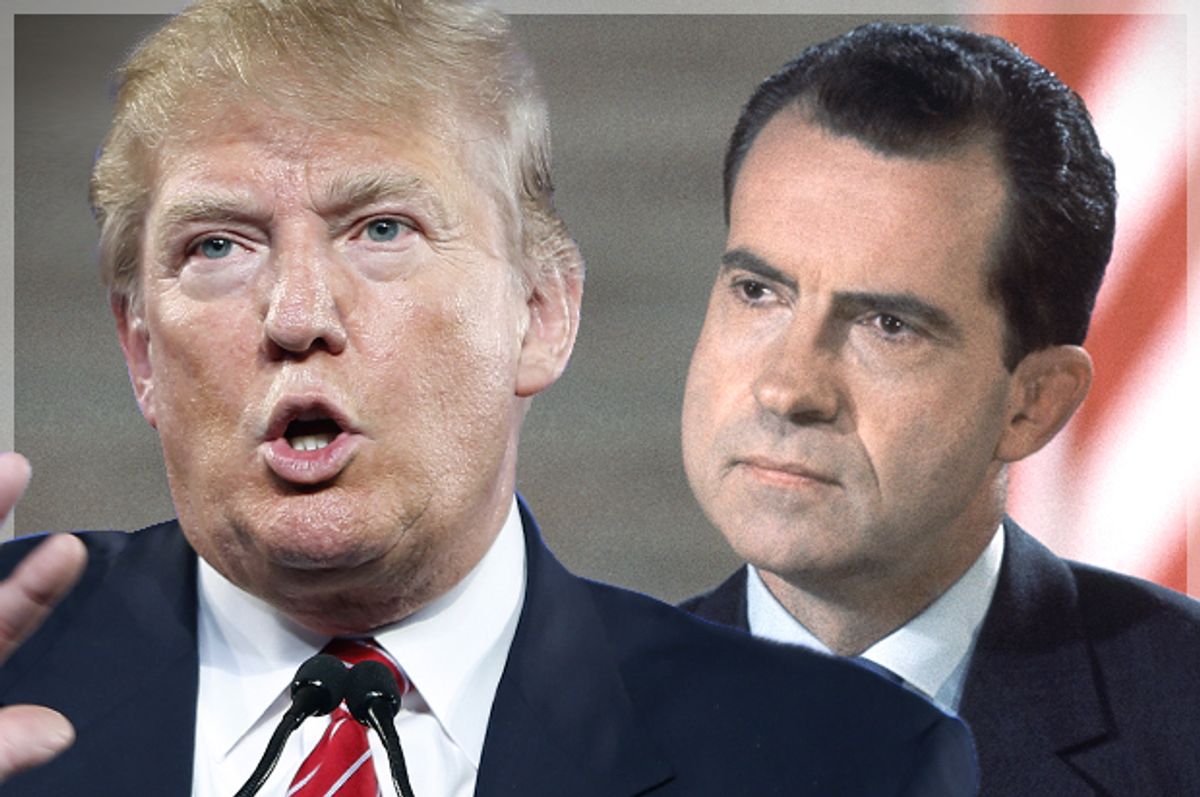 I got to watch Donald Trump’s Alabama pep rally from the distance of a brief vacation, and that made it at once more entertaining and more chilling. I could admire the spectacle: “Sweet Home Alabama,” that sea of adoring white faces, the proprietary American flags. Trump himself channeled Richard Nixon, claiming his Alabama backers represented a modern “silent majority” that would be silent no more.

Personally, I can’t decide whether Trump is playing Nixon or George Wallace. Of course, in polite journalistic company, we’re not supposed to say either. We’re still supposed to act like Trump’s anti-immigrant campaign represents the legitimate frustration of the white working class. The frustration is real, but the solution is Nixonian: Get those white voters focused on a menacing “other,” rather than plutocrats like Trump.

The Alabama spectacle gave Trump’s team the opportunity to showcase his Nixonian “Southern strategy.” Sure, he’s focused on Iowa and New Hampshire, campaign manager Corey Lewandowski told the Washington Post, but he’s looking forward to Southern Super Tuesday, March 1. “Then comes the South. That’s the path to the nomination.”

Still, Lewandowski and other Trump backers aren’t quite sure how to deal with the racism they’re channeling. On CNN, the Trump campaign manager ducked a question about cries of “white power” heard in the Alabama crowd, though he did condemn the attacks on a homeless Latino man by Trump supporters in Boston last week. (Trump himself refused to condemn the attackers, then backtracked.)

“If that is what happened in Boston, that is not acceptable in any nature,” Lewandowski told Jim Acosta. Then he added an odd note: “We should not be ashamed to be Americans and we should be proud of our heritage, and proud to be American.”

It’s hard not to hear a dog whistle in that comment about “our heritage,” given the element of white nationalist support Trump is enjoying. The New Yorker has a great piece out Monday about Trump’s white nationalist fans. I wrote about this earlier in the month, but the controversy over the sexually charged slur “cuckservative” seemed to obscure the real news: There is a growing fissure in the Republican Party over how racially explicit the party’s appeals to white voters ought to be.

Dog whistles about crime and welfare may no longer be enough: the racist right wants party leaders who are committed to defending the country’s white “heritage.” And many think they’ve found their man in Donald Trump.

Trump is “refreshing,” white nationalist Richard Spencer told the New Yorker’s Evan Osnos. “Trump, on a gut level, kind of senses that this is about demographics, ultimately. We’re moving into a new America.” Though Spencer doesn’t think Trump himself is a white nationalist, he believes he channels “an unconscious vision that white people have—that their grandchildren might be a hated minority in their own country. I think that scares us. They probably aren’t able to articulate it. I think it’s there. I think that, to a great degree, explains the Trump phenomenon. I think he is the one person who can tap into it.”

Jared Taylor of the white supremacist American Renaissance agrees. “I’m sure he would repudiate any association with people like me, but his support comes from people who are more like me than he might like to admit.”

So far Trump hasn’t repudiated admirers like Taylor and Spencer. Lewandowski had an opportunity when asked about the “white power” cries, but didn’t take it up. Over at Breitbart, which is itself becoming a white nationalist site, they’re angry that CNN "chose to "badger" Lewandowski about the “white power” issue. The Breitbots were also bothered by this Politico story that suggested “the ghost of George Wallace” animated Trump’s Alabama rally.

Meanwhile, the Washington Post reporters David Weigel and Robert Costa are being attacked by Instapundit as ex-conservative lamestream media sellouts, because they accurately reported that the rally played “Sweet Home Alabama” and that the crowd featured a neo-Confederate. (To be fair, let's also note that a black minister said a prayer and an African American choir performed at the event.)

But denying the racial subtext of Trump’s appeal denies who Trump is: He has long trafficked in racial stereotyping and white fear. Remember his ads urging the death penalty for the so-called “Central Park Five,” who were essentially framed for the rape of a white jogger in 1989. Trump called it a “disgrace” when the city paid the men a settlement for the wrongful conviction. “They should be very thankful I wasn’t mayor because they wouldn’t have gotten a dime,” he said just last week.

His birther crusade against President Obama likewise channeled white anger -- at the outrage of having to tolerate a black president – by propagating the lie that the president was an illegitimate fraud. At the time, Trump advisor Roger Stone – Nixon’s man too – called it “brilliant,” adding, “It's base building. It gives voice to a concern shared by many on the right.

That “base building” in the last election cycle is part of what’s made Trump the frontrunner this time around. Some of the same Republicans who courted Trump’s endorsement in 2012 now profess to be horrified by the nativism he’s channeling – but they only have themselves to blame. If they succeed in squelching Trump’s candidacy, they risk a Wallace-like insurrection, in which Trump peels away the white working class voters who’ve become the GOP base and dooms its hope of winning the White House.

But now restive Southerners and other white nationalists want more than dog whistles; they want explicit endorsement of a pro-white agenda.

“I think he’s, like, dog-whistling,” a white welder who likes Trump told the New Yorker. “He’s saying we should probably favor more European immigration, or maybe more of just a meritocracy sort of system, but he’s not coming out and saying it, because people will literally stamp him: ‘Oh, you just hate Mexicans.’ ” The welder would like to see Trump be honest: “Why not just say it?”

For now, at least, Trump is not quite saying it; he still insists his comments about Mexican “rapists” and criminals only refers to those who come here illegally, not all Mexicans. But the rising boldness of Trump’s white nationalist supporters raises the question: Can a party that rose to national power thanks to coded racism survive when noisy elements of its base demand explicit racism? We're about to find out.