"Text neck" is a thing: 5 frightening maladies of the digital era

We're all addicted to our electronic devices. Few of us realize the physical toll they're taking on our bodies 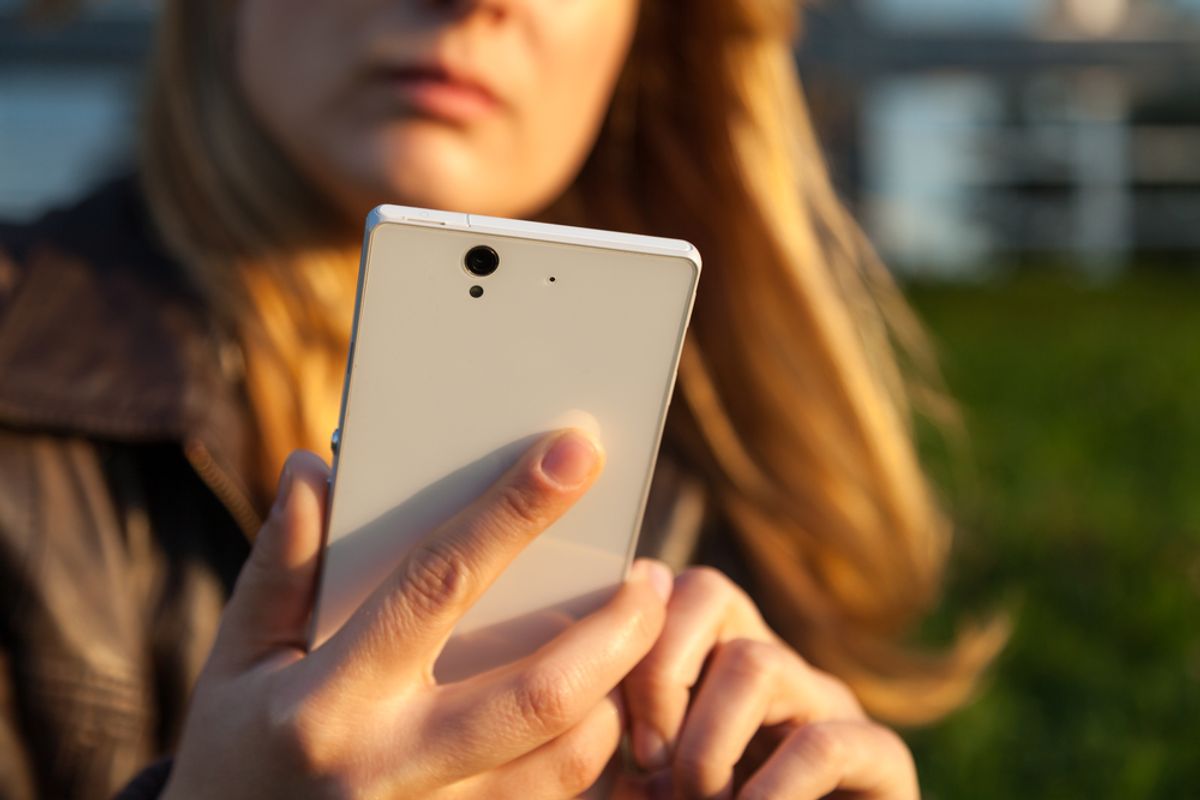 Face it, we’re all addicted to our electronic devices. You might know a few lonely holdouts, determined to stay detached and live off the grid, but their numbers are diminishing. Most of us are living in an ever more wired world, dependent on instantaneous communication and information, and at a panicky loss when we can’t find our smartphones.

No one wants to hear it, but we’re paying a steep price for this behavior. Our tech habits are laying ruin to our physical and mental health and abilities. Being aware of the possible pitfalls is your first line of defense against premature aging, aches and diminished brain capacity. That and unplugging more often. Here are five digital maladies you should be aware of.

You see them everywhere. Teenagers, middle-aged commuters, grocery shoppers of all ages, hunched over small objects they gaze at like little miracles, their necks jutting forward and down at an oddly excruciating angle. And they just stay there, seemingly frozen, unaware.

These are the legions of people giving themselves “text neck,” a thoroughly modern condition that can lay ruin to one's neck and spine. People are hunched over smartphones, engrossed in text conversations, checking Facebook, returning emails, Instagramming photos, unaware that they are putting immense strain on their necks and spines that will plague them for a lifetime.

The head is heavy under the best of circumstances, a weighty 12-pound object to support. Your neck and spine work tirelessly to hold it up it and are well set up to do so. Or they were, until smartphones came along and gave everyone incentive to cock their heads forward at an unnatural angle, for hours on end.

That’s the burden that comes with staring at a smartphone — the way millions do for hours every day, according to research published by Kenneth Hansraj in the National Library of Medicine. The study will appear next month in Surgical Technology International. Over time, researchers say, this poor posture, sometimes called “text neck,” can lead to early wear-and-tear on the spine, degeneration and even surgery.

60 pounds!!! For perspective, that’s like carrying an 8-year-old around your neck for four hours a day. The problem is especially profound for young people, Dr. Hansraj told the Post, who may unwittingly and unconsciously be ushering in a lifetime of spinal pain.

Some ways he recommends to fight it:

This is depressing. Hearing loss is not just for the elderly anymore. Most of us are very likely to have diminished hearing at younger and younger ages. If you’re not already having trouble hearing normal everyday speech, that day is probably coming, and sooner than you think. That is, unless you have actively and extraordinarily protected your hearing for basically your entire life.

Early and pervasive hearing loss isn’t solely a result of our digital devices, it's also a product of the everyday noise we all consider normal, but is actually at a decibel level that does damage: leaf blowers, lawn mowers, sirens, screeching subway trains, hair dryers, loud rock concerts, car alarms, even overly loud sound systems at restaurants and movies, and certain kid’s toys can all be, well, deafening.

All of these loud noises set our fragile eardrums vibrating and if sustained enough and loud enough can damage the whole irreplaceable apparatus.

But the widespread use of portable music devices is pushing this epidemic into the stratosphere. According to the New York Times, “a national study in 2006 by the American Speech-Language-Hearing Association found that among users of portable music devices, 35 percent of adults and up to 59 percent of teenagers reported listening at loud volumes.”

Earbuds are potentially worse than headphones, but if whatever you are using is piping things in at a volume sufficient to drown out background noise, you might want to start learning sign language now.

Hearing damage is cumulative and irreversible. Carry around some ear plugs anyway, and turn down the volume.

What constant digital media use does to our brains is a big, seemingly speculative topic. But science is beginning to catch up, and it’s not pretty. Simply put, overuse of smartphones makes us less productive, less rested, more likely to forget things, and in a word, dumber.

Lots of people spend their days at their computer and their nights checking their phones, returning texts and emails. This, according to a recentstudy conducted by University of Florida, Michigan State University and University of Washington, robs people of the crucial ability to recharge in their off hours. Productivity, not to mention mental health, are both diminished.

Checking multiple devices and screens throughout the day has also perpetuated the idea that people have become better multitaskers, more able to flit between tasks, refocus quickly and get more things done, all thanks to the miracles of technology.

According to researchers, constant multitasking whittles away our ability to concentrate for sustained periods of time, kind of a prerequisite for meaningful accomplishments. Eventually, even when all the screens are shut off, our concentration is shot.

“The people we talk with continually said, look, when I really have to concentrate, I turn off everything and I am laser-focused,” Stanford University professor Clifford Nass told NPR. “And unfortunately, they've developed habits of mind that make it impossible for them to be laser-focused. They're suckers for irrelevancy. They just can't keep on-task.”

Read books any more? I barely do, though I do read voluminously online. It turns out I’m paying a cognitive and possible psychological toll for that. Reading on a screen is simply not as beneficial as reading in print. One study in 2014, “found that readers of a short mystery story on a Kindle were significantly worse at remembering the order of events than those who read the same story in paperback,” according to Rachel Grate at Mic.

And the more you read digitally, the harder it gets to do a deep dive into an actual book. The other benefits of reading include increased empathy, decreased stress and better sleeping. Both are significantly enhanced by reading print as opposed to digital. Much has also been written about the destructive impact of the blue light emitted by digital devices on circadian rhythms, the body’s biological clock, resulting in poorer sleep and the resulting panoply of physical and mental health problems.

Your inability to detach from devices will also both affect and infect the people around you, friends, work peers and family. When we lose the crucial ability to detach, everyone’s overall mental health and well-being suffers. Parenting experts have pointed out that children are scarred by having parents who are unavailable because they are constantly on their phones. So, if not for yourself, at least unplug for the sake of others you care about.

Okay, enough about the brain. Spending inordinate amounts of time in front of a computer is ruining people’s looks! Your looks! Seriously, if that doesn’t convince you to take more screen breaks, we don’t know what will.

Cosmetic surgeons are reporting that more women are developing the dreaded “computer face,” a combination of permanent frown lines, wrinkles around the eyes from squinting, jowls (jowls!) and double necks from looking down for long periods of time.

"If you spend most of the time looking down then the neck muscles shorten and go saggy, eventually giving you a second neck,” cosmetic surgeon Michael Prager told the Daily Mail. And because when people work and are under stress they frequently wear serious or even grumpy expressions on their faces, those lines are becoming permanently etched on younger faces.

The solution: Get up, stretch your neck, change your expression, move your screen to eye level. And Botox, of course, according to plastic surgeons, anyway.

No word yet on the longterm effects of the dreaded “selfie face,” but it can’t be good.

The bad news, perhaps unsurprising, is that sitting in front of a computer screen hour after hour, week after week, year after year as many jobs require you to do can cause pain and discomfort to the eyes, blurred vision and headaches.

The good news is that eye doctors have yet to find that Computer Vision Syndrome causes permanent eye damage. And there is something you can do if you are experiencing the negative consequences of sitting in front of a computer screen too much, besides getting up and doing something else, like forever, which might not be an option.

A lot of this eye strain can be eliminated by making changes in your work environment. The Scheie Eye Institute at Penn Medical Center says, “Reducing glare and harsh reflections on the computer screen by modifying the lighting in the room, closing window shades, changing the contrast or brightness of the screen, or attaching a filter or hood to the monitor,” will all help.

“Moving the computer screen to improve the comfort of the eyes. The screen should be at or just beyond an arm's length away (about 20 to 26 inches) to give the eyes a comfortable focusing distance. The screen should also stand straight in front of the face instead of off to the side to ease eyestrain. The center of the monitor should be about four to eight inches lower than the eyes to allow the neck to relax and to lessen the exposed surface area of the eye, which will reduce dryness and itching.”

You're probably ready for a break from the screen right about now.