The forgotten GOP past of the Democratic field: What their political odysseys say about American politics

The Democratic primary field includes only one lifelong Democrat. What gives? 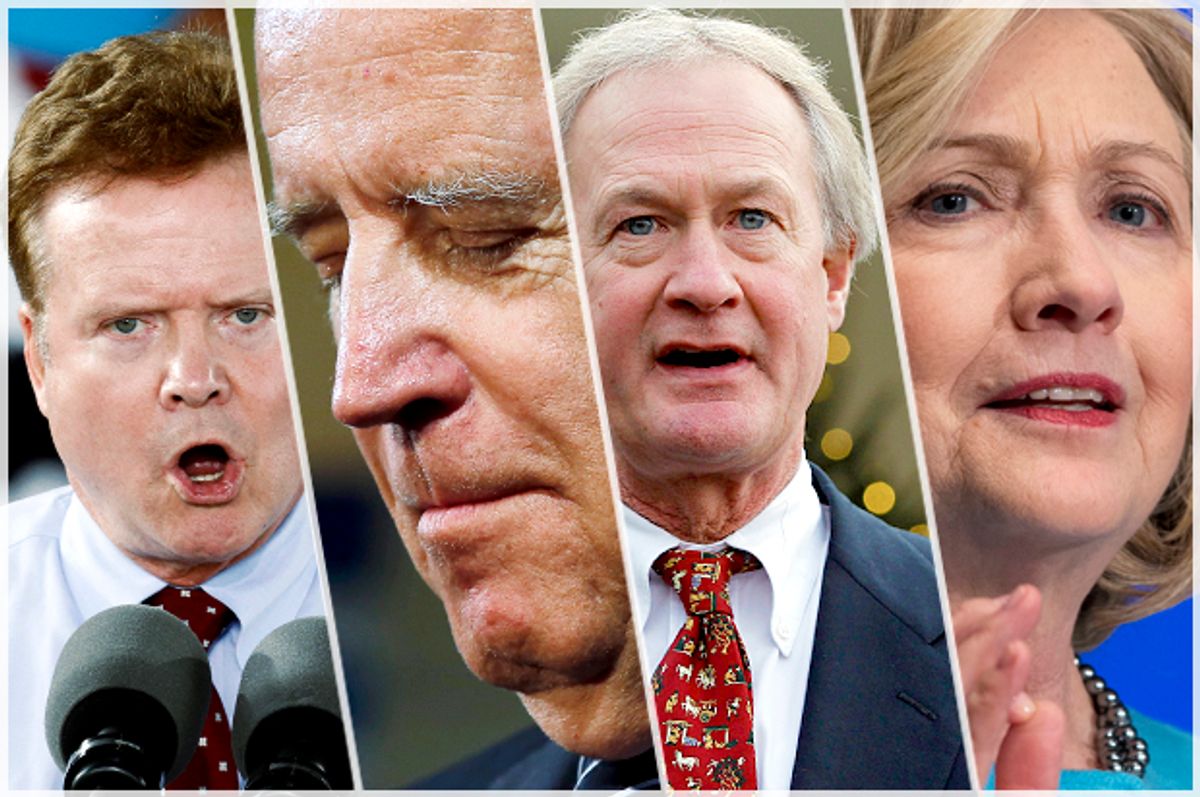 For former Maryland Gov. Martin O’Malley, the prospect of Vice President Joe Biden’s entry into the 2016 contest marks yet another setback for a candidate who once hoped to emerge as the leading alternative to Democratic frontrunner Hillary Clinton, but has languished in fundraising and the polls. But appearing on ABC’s “This Week” on Sunday, O’Malley tried to make the best of the new reality taking shape, seizing on Biden’s increasingly serious deliberations to take a not-so-thinly veiled swipe at his Democratic rivals.

“I have a great deal of respect for Vice President Biden,” O’Malley said. “He’s a very, very good and decent man, it would be nice to have at least one more lifelong Democrat in the race, and I think his wisdom and his experience would add much to this Democratic conversation.”

Asked whether the “lifelong Democrat” line was an implicit jab at Vermont Sen. Bernie Sanders, currently Clinton’s top progressive challenger despite never having joined the Democratic Party, O’Malley demurred, insisting that he merely intended to “compliment” Biden. But given the O’Malley camp’s frustration with Sanders’s rise -- and lingering questions about why Sanders is seeking the nomination of a party he has lambasted as “ideologically bankrupt” -- it was hard to read O’Malley’s remarks as nothing more than an expression of admiration for the vice president.

Here’s what’s striking about the Democratic field, though: Aside from O’Malley, none of the current or prospective candidates have been registered Democrats their entire adult lives -- not even Biden.

Though Biden has been a Democrat for the entirety of his 46 years in elected office -- as New Castle County Councilman, U.S. Senator, and President Obama’s chief lieutenant -- Biden’s early career hardly foreshadowed his five decades as a party stalwart. Fresh out of Syracuse University Law School, in 1968, Biden joined the Wilmington law firm of William Prickett, an influential Delaware Republican. Speaking to Time magazine two decades later, Biden said that he “thought of myself as a Republican” in those days, although his dislike for Richard Nixon kept him from formally affiliating with the GOP. (Biden registered independent instead.)

Now, Biden was no conservative; in fact, it was the late-’60s conservatism of Delaware’s Democratic Party that initially kept him from joining it. "I was really upset with the Democratic Party in Delaware because of its perceived position on civil rights,” Biden explained to Time, citing the racial policies of Democratic Gov. Charles Terry, whose liberal Republican opponent Biden supported in 1968. Local Republicans attempted to recruit the politically ambitious young lawyer, but his unease with the Nixon-led GOP -- and a new job working for a Democratic-led law firm -- led Biden down a different path. Aligning with the so-called New Politics Democrats, who declared war on old party barons and advocated political reform, Biden joined a commission to revamp the Delaware Democratic Party before winning election to the New Castle County Council in 1969. Three years later, the 30-year-old Biden ousted moderate Republican Sen. Caleb Boggs -- precisely the sort of establishment-friendly GOPer he may well have once supported.

As Biden proved unable to overcome his aversion to Nixon and seized the opportunity to reform the Democratic Party, Hillary Rodham was undergoing a political metamorphosis of her own. Raised by a staunchly conservative father and a quietly liberal mother in the Republican suburbs of Chicago, the erstwhile Goldwater Girl found herself increasingly convulsed by the movements for civil rights and women’s equality and against the war in Vietnam. By 1968, Rodham, a student at Wellesley College, supported the anti-war Democratic presidential campaign of Eugene McCarthy, driving on weekends from Wellesley to New Hampshire to “stuff envelopes and walk precincts,” she called in her 2003 memoir “Living History.” But though she had abandoned the conservative views that led her to cheer Barry Goldwater’s 1964 candidacy, Rodham had not yet extricated herself completely from the GOP. In the summer of 1968, she served as a Washington intern for the House Republican Conference, working for Minority Leader Gerald Ford and Reps. Melvin Laird and Charles Goodell. Goodell, a progressive New Yorker, brought Rodham and a handful of other interns to the GOP convention in Miami, where they would work in support of New York Gov. Nelson Rockefeller’s 11th-hour liberal challenge to Richard Nixon. In “Living History,” Hillary Rodham Clinton recalled Rockefeller’s defeat as the moment that “cemented the ascendance of a conservative over a moderate ideology within the Republican Party” -- an ascendance that led her to jettison the GOP.

The centrist Rockefeller’s loss to the center-right Nixon was the latest symptom of an increasingly conservative GOP, but over the next three decades, the party remained ideologically heterogeneous enough to accommodate Southern conservatives like North Carolina Sen. Jesse Helms and Northeastern moderates like New Jersey Sen. Clifford Case, Pennsylvania Sens. John Heinz and Arlen Specter, and Rhode Island Sen. John Chafee. When Chafee died in office 1999, five years after the Gingrich Revolution, his brand liberal Republicanism was endangered -- but not yet extinct. His son, Republican Warwick Mayor Lincoln Chafee -- now a long-shot Democratic candidate -- was appointed to succeed his father, winning election in his own right in 2000. Lincoln Chafee’s single full term was marked by high-profile breaks with his party -- he championed abortion rights and gay equality, voted against the Bush tax cuts and the war in Iraq, and declined to support George W. Bush for re-election in 2004. (Instead, Chafee wrote in the name of Bush’s father, who had accommodated himself to the conservative ascendance but remained temperamentally at odds with the coarse conservatism of Gingrich and Co.) Chafee’s heresies nearly derailed his re-nomination in 2006, but he lost to Democratic challenger Sheldon Whitehouse that fall anyway. Chafee then left the his ancestral party, winning election to the Rhode Island governorship as an independent in 2010 before joining the Democratic Party in 2013.

While Biden, Clinton, and Chafee’s drift toward the Democrats reflected ideological sorting in the age of partisan polarization, former Virginia Sen. Jim Webb -- another Republican-turned-Democrat seeking the White House -- does not fit quite as neatly into that narrative. If the blue-blooded, Ivy-educated Chafee represented the Republican Party's elite WASP past, the Scots-Irish Webb was the face of the new, culturally populist GOP: A Marine Corps veteran of Vietnam, an unapologetic defender of the Southern militancy, an anti-liberal crusader who believed that the establishment press, campus activists, and congressional Democrats had engineered the U.S. defeat in Indochina.

Evincing the blunt cultural conservatism of the anti-liberal backlash, in 1979, Webb penned an essay railing against the movement to allow women to serve in combat, which appeared under the headline “Women Can’t Fight." Within five years, he was serving in the Reagan-era Defense Department, rising to Secretary of the Navy. Fiercely opposed to efforts to cut the Navy’s size, Webb left the administration in 1988. Though the swashbuckling Webb was an ideological and temperamental fit for the new GOP, he displayed an increasingly maverick streak in his post-government career, expressing skepticism toward American foreign policy in the Middle East and condemning the Iraq War. The Mesopotamian morass prompted Webb to bolt the GOP, and Democrats successfully recruited him to run against Republican Sen. George Allen in 2006; Webb squeaked by, thanks to outrage over Allen’s use of a racial slur against a Democratic campaign tracker. Though Democrats cheered Webb’s victory -- which provided the 51st seat needed for the party to retake Senate control -- he proved a persistent thorn in his adopted party’s side, slow-walking the repeal of the anti-gay “Don’t Ask, Don’t Tell” military policy, slamming the administration’s approach to health care reform (after voting to approve the Affordable Care Act), and taking to the Wall Street Journal op-ed page to ridicule the notion of “white privilege” and oppose targeted aid for communities of color. Given that he’d spent his term swimming against his party’s current, it hardly came as a surprise when Webb announced he wouldn’t seek re-election in 2012. Webb’s quixotic presidential bid, by contrast, makes less sense: In 2015, it turns out, there's little appetite among the Democratic electorate for a candidate who backs the Confederate flag, questions evolution, lauds Ronald Reagan, and bashes the Obama administration's diplomacy with Iran.

Primary voters looking for a “lifelong Democrat,” then, have a grand total of one (1) choice in this cycle’s roster of presidential candidates. But while the ex-Republicans (or Republican leaners, in Biden’s case) have evolved on high-profile issues over their careers, their political odysseys are as much about the peregrinations of the two major parties as they are about the transformation of the candidates themselves. For the better part of 50 years, Clinton, Biden, and Chafee have long been planted on the center-left of the American political spectrum; half a century ago, the Republican Party, while hardly dominated by such voices, included them. With liberals and moderates having gravitated toward the Democratic Party and Republicans becoming more uniformly conservative, however, the era in which a Joe Biden could think of himself as a Republican has long since passed. Ohio Gov. John Kasich -- who favors immigration reform and Medicaid expansion but opposes abortion rights and gay marriage, questions climate science, and supports steep tax cuts -- is now regarded as the most moderate of the Republicans' 2016 candidates; he's certainly to the left of Ted Cruz, but he's hardly a latter-day Nelson Rockefeller.

So there's undoubtedly a lesson in the dearth of Democratic candidates who have been members of the party their entire adult lives. It's just not necessarily the one Martin O'Malley intends.