Jeb says it’s Asians who have anchor babies, while Trump and Walker bash China. Good luck with the outreach, guys! 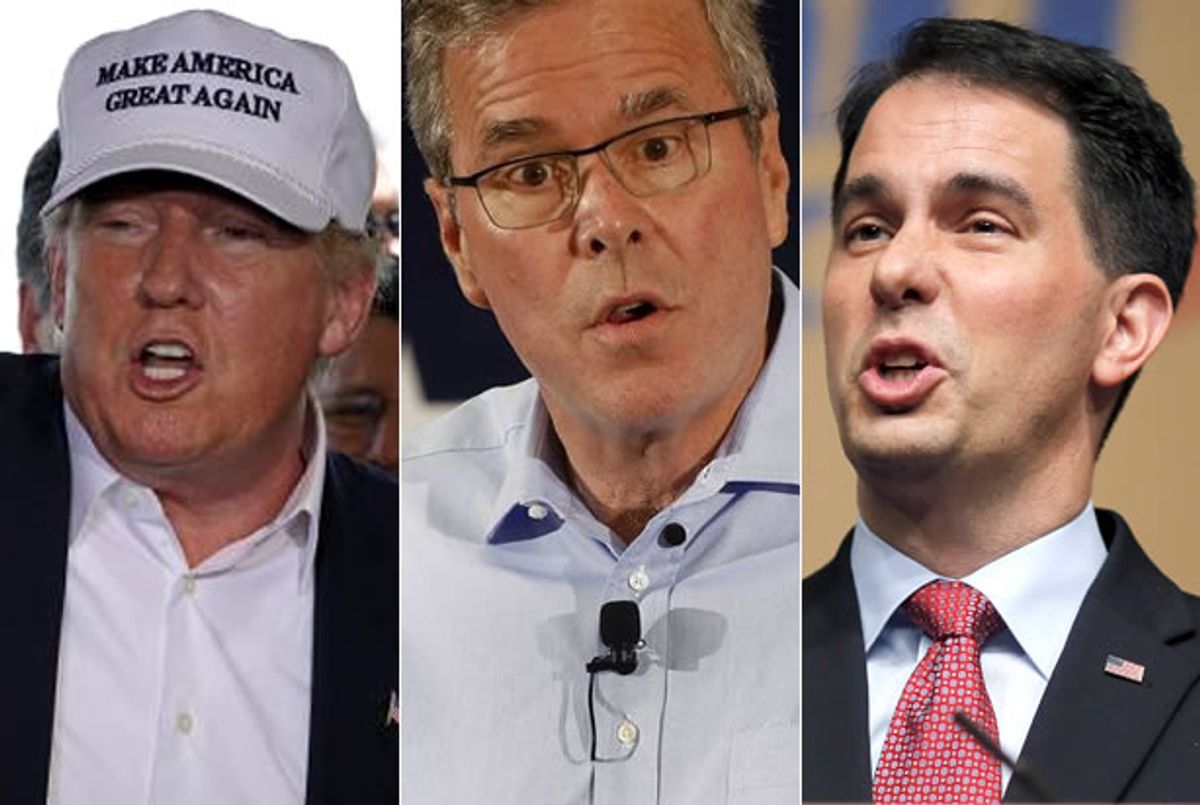 Jeb Bush proved for the millionth time Monday that he's the worst candidate promoted as a presidential "frontrunner" since Ted Kennedy in 1980. Bush’s latest gaffe, you probably heard, involved his claim that he’s not scapegoating Latinos with his complaints about “anchor babies,” because the real “anchor baby” scammers – people who aren’t Americans but have children here so they become citizens -- are “Asian people,” not Latinos.

Bush brushed off a suggestion that he’s alienating Latinos with his “anchor baby” rhetoric by pointing to “my background, my life, I’m immersed in the immigrant experience.” Then he stepped in it: “Frankly it’s more related to Asian people coming into the country…taking advantage of birthright citizenship.”

Suddenly it seems the GOP field has a new political scapegoat: Asians! There aren’t as many of them as there are Latinos, though they’re the fastest growing “minority” group in the country. The same day Bush slurred Asians on the illegal immigration issue, Gov. Scott Walker demanded President Obama cancel his meetings with Chinese president Xi Jinping, because…toughness? He didn’t really say.

Meanwhile, Donald Trump's China-bashing has long rivaled his Mexican-bashing when it comes to identifying a top foreign scapegoat for our problems. As the stock market plunged again Monday, Trump had an excuse to lay it on thicker.

“I’ve been telling everybody for a long time,” he said in a video. “China’s taking our jobs; they’re taking our money. Be careful — they’ll bring us down. You have to known what you’re doing — we have nobody that has a clue.”

And from the back of the pack Gov. Chris Christie yelled, “Me, too!” claiming that the federal debt “has been given to us in large measure by the Chinese” and “as the Chinese markets have a correction” the U.S. will suffer.

There’s a weird pause when Bush blasts Asian immigrant parents. You could hear him hesitate mid-sentence, as if he knew he was stepping in it again – and then he carried on with his thought because, why not? He’s in free fall already. Also: these are Republicans we’re talking about; they don’t know discretion or restraint when it comes to sharing their racial theories. It’s like he’s sitting with the fellas at his private club, talking about “those people.”

But bashing Asians, while it might help with the party’s white base, hurts the GOP long term, as Asians are probably the best prospects for conversion if Republicans ever decide they need to make a play for non-white voters. They used to be a fairly reliable if small component of the Republican electorate.

In 1988, a majority of Asian Americans voted for George H.W. Bush. But then they began trending more Democratic as the Republican Party took a nativist turn, most evident in California Gov. Pete Wilson’s support for the anti-immigrant Prop. 187 in 1994. By 2012, Mitt Romney got only a quarter of Asian votes against Obama.

Two years later, however, in the 2014 midterms, exit polls showed almost half of all Asian Americans voted for the GOP candidate for House. This is clearly a voting bloc that’s up for grabs – but Republicans seem inclined to chase them back to the other party.

I certainly don’t mean to suggest Asian Americans have divided loyalties, or can’t be critical of Chinese government policies. It’s just that somehow, the GOP often slides into anti-Asian racism in what could be a legitimate debate about our relationship with China.

When Michigan Rep. Pete Hoekstra was trying to knock off Sen. Debbie Stabenow in 2012, he ran offensive ads blaming Stabenow’s support for spending programs for our mounting debt to the Chinese. It featured a grossly stereotypical “Chinese” woman, speaking broken English, thanking “Debbie Spend-it-now” for making the Chinese rich. "Your economy get very weak, ours get very good. We take your jobs,” she said.

Then there’s the debate over the issue of sex-selection abortions. Republicans have defended such bans by claiming Asian immigrants are seeking to have only sons. Promoting such a ban in Congress, GOP Rep. Trent Franks claimed “sex selection is demonstrably increasing here in the United States, especially but not exclusively in the Asian immigrant community,” and he called it “the ultimate violence against women.” There’s absolutely no evidence for Franks’ claim.

Bush was supposed to be running a campaign that would appeal to a wider electorate. But he can’t help himself: the only way he knows how to get out of trouble with one group is to bash another. He can’t trump Trump for nativist cruelty to undocumented immigrants – “Get them the hell out of the country!” the GOP frontrunner brayed last night to Bill O’Reilly – so you might have expected him to find another path. But he’s lost and has no apparent rationale for his campaign.