Caught in the smart-mean trap: Is "Another Period" funny, or just awkwardly tasteless? 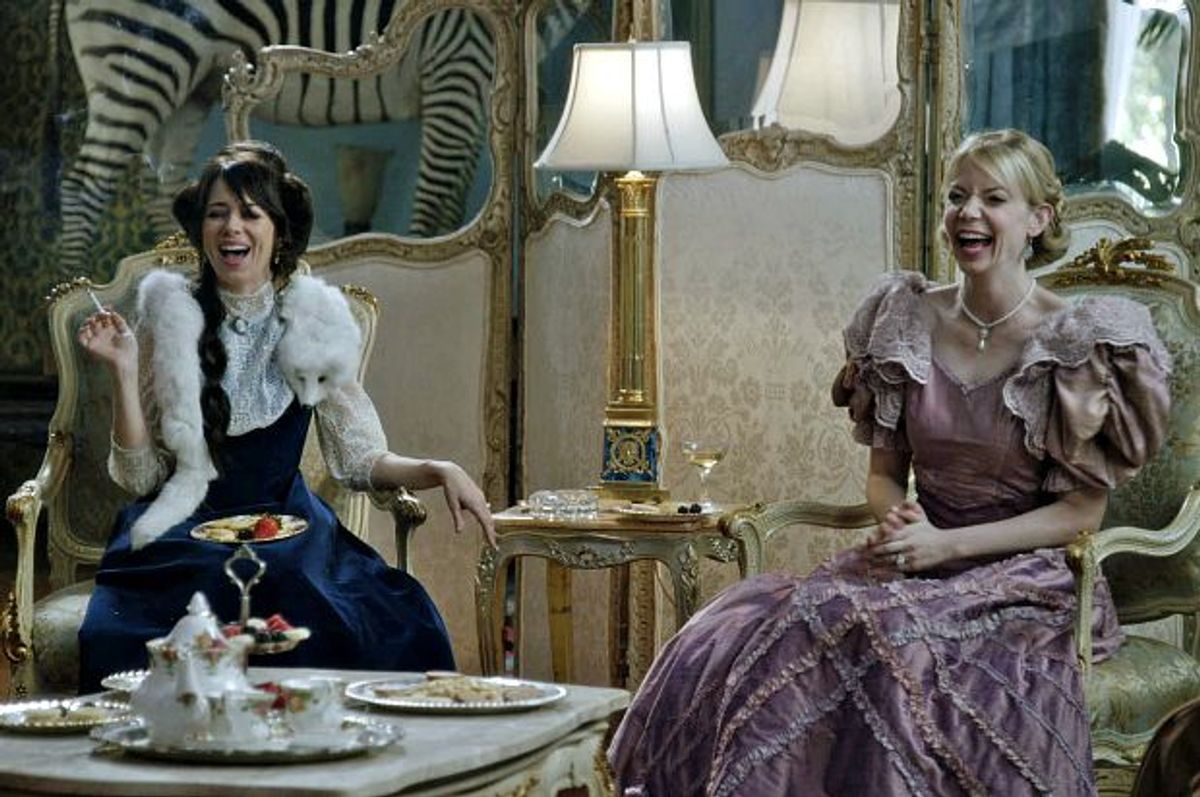 It’s hard to dissect the anatomy of a joke. Now more than ever, humor is the subject of public debate in mainstream media (and any degree of good- or ill-natured sniping on social media). What we find funny, and why; which jokes are made when, and how. Is targeted comedy “okay” when it “punches up”? Is it ever appropriate to “punch down”? If someone is from a specific ethnic, cultural, or racial group, does that give them carte blanche to poke fun that group? It’s easy to offer up an explanation of a joke; it’s hard to argue persuasively that the joke is funny. More than any other art form, humor operates on the “I’ll know it when I see it” principle.

“Another Period,” concluding its first season tonight on Comedy Central, strains this principle more than most shows. The premise and packaging is rather promising: The show is about a disgustingly rich family living in Newport, R.I. in 1902 whose daughters, especially, are overdoing it in every possible way. Lillian and Beatrice are absurdly spoiled and ridiculously entitled; occasionally long-suffering servants carry them from room to room so that they don’t have to walk, and a preferred beverage is that old standby, “cocaine wine.” “Another Period”’s theme music is a rap song written by Snoop Dogg; there’s a bit of the mockumentary style at play, too, as all the members of the family have their own private chats with the camera, confessing all kinds of misdeeds and schemes. The show pokes fun at the ever-cheery servants of “Downton Abbey” and the decadence of celebrity culture from our era. It also joyously mocks our own history, with oddly on-point barbs—the show’s set at the wane of the corrupt and opulent Gilded Age, in a city that was a hot spot for the vacationing wealthy. Charles Ponzi, Mark Twain, and Sigmund Freud stop by to make brief and ridiculous remarks.

At the same time, I’ve watched this first season expecting it to be funnier than it is. There are moments it consistently lands—Paget Brewster’s Dodo, the matriarch of the fictional Bellacourt family, is somehow always hilarious. But most of the time, it lands somewhere between the kind of amusing that isn’t quite funny enough to laugh outright and vaguely awkward embarrassment. And partly that’s because the show takes a lot of risks with the material of its humor—without necessarily being able to convert that material into actual laughter. I admire the effort, but I can’t quite understand it.

For example: The second episode, titled “Divorce,” in which a visitor “ravishes” a servant. The visitor is female and the servant male, and the ensuing plot is an attempt to satirize rape plots in soapy period dramas (ahem, “Downton Abbey”). No one believes poor Garfield (Armen Weitzman), who loudly protests that he once was “pure,” and the tyrannical butler, Mr. Peepers (Michael Ian Black) goes so far as to say Garfield should find the woman’s attentions an honor. The housemaid Chair (Christina Hendricks) consoles Garfield, telling him they live in a “ravish culture” that is pervasive, even in “daguerreotypes” and “etchings.” But that’s kind of where the humor, such as it is, ends; the episode leaves it unclear as to whether or not the joke of “Divorce” is that a woman raped a man, or that no one believed him, or that he would be distraught, or that the word “ravish” sounds so quaint. The other plot in the episode doesn’t connect to this subplot at all, except to give Lillian (Natasha Leggero, star and co-creator) the idea to divorce her husband. Following a quick gag or two about gender roles being swapped and poor Garfield taking emotional solace in the gift of a tea towel, the episode ends.

There’s a seed of humor there—a few, actually—but no punch line worth mentioning. The dangling setup is both confrontationally mean-spirited and largely unresolved, in favor of some low-grade finger-up-the-butt jokes. I both admire it and can’t quite understand it; it’s a witty and brassy setup, without even the satisfying narrative arc of kicking the victim when he’s down. I think “Another Period” is caught somewhere between wanting to be very smart and wanting to be very mean, and the result is a show that is sort of interesting, but more uncomfortable than entertaining. (It doesn’t help that the show is overstuffed with comedians, with Chris Parnell, Jon Daly, David Wain, Jack Black, and Thomas Lennon in almost completely marginal roles.) Humor tackling flashpoints has to be finer-grain if it wants to land; playing with the concept of blackface (with “mickface”) as well as thornier issues of queer identity and incest aren’t funny in and of themselves.

I was reminded of that in the arc leading up to tonight’s finale, which has featured Ben Stiller as Charles Ponzi—Lillian’s former lover with a great idea for an investment, if anyone would take a minute to listen. Ponzi is accompanied by a little Indian boy named Tabu, pronounced “taboo,” played by Roni Akirati. He’s charming as all hell, and as is the nature of any servant in this show, he is abused terribly by Ponzi. At the end of “Lillian’s Birthday,” Tabu offers himself as a servant to the Bellacourts, once Ponzi has fled. They not-so-politely decline. The idea is probably a satirical take on obsequious savages that become elated servants of white men—like Robinson Crusoe and his man Friday, or to a lesser extent, Queequeg for Ishmael in “Moby Dick.” And to be sure, the finale, which I had a chance to watch, goes farther towards tying off the loose ends of “Another Period”’s dangling premise-humor than anything has before. But even though I laughed out loud at Dodo’s line early in the season about a “coon-tie tycoon,” I just couldn’t find anything about little Tabu particularly funny.