Confederate fantasies & the Donald Trump surge: Inside the dangerous Southern mythology creeping into the GOP primary

Earlier this week, Ken Burns blew the lid off of this election's most unsettling developments 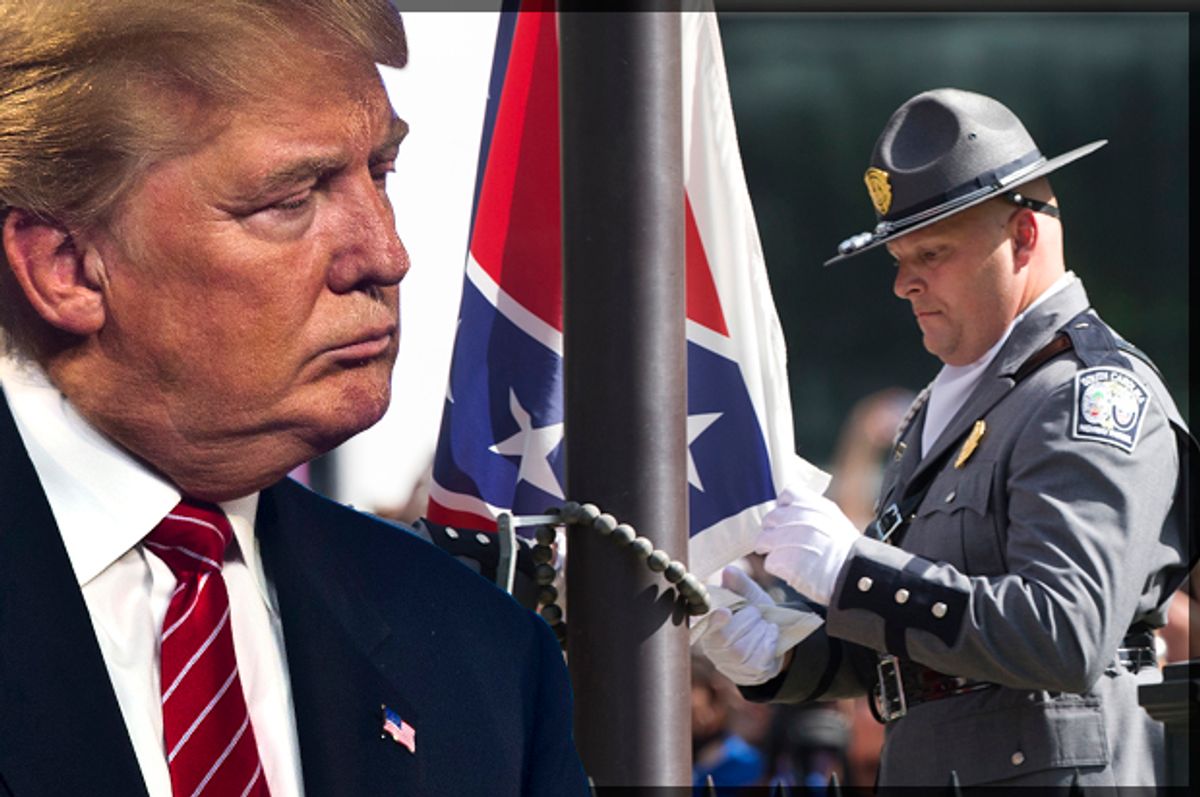 I can only imagine the sheer volume of racists, hillbillies and crackpots festooning Ken Burns' Twitter feed and email inbox today. The award-winning documentary filmmaker appeared on CBS News' "Face the Nation" over the weekend and set the record straight, not only on the true reason for the Civil War, but also about how the "Lost Cause" mythology has informed the modern view of the Confederate flag. He also noted the real message behind Donald Trump's involvement in the Birther movement.

And, of course, Burns wasn't just predictably eloquent, but he was objectively correct about every last detail.

CBS News's John Dickerson asked Burns about the age-old debate, whether the war was fought over states' rights or slavery. Among other things, Burns rightly noted,

Exactly. Slavery was empirically and indisputably the entire reason for the Civil War. As Burns described in the interview, it’d been gurgling just under the surface ever since the signing of the Declaration, and especially following the ratification of the Constitution. Speaking of which, whenever someone brings up the states' rights excuse for the war, the most effective response ought to be, States’ rights to do what, specifically? Clearly, the answer is the right to own slaves. Full stop.

But the brutal realities of the Civil War, including what precipitated it, were aggressively subverted by what's known as the Lost Cause mythology. During the late 19th and early 20th centuries, historians, public figures, poets and authors formulated this mythology, which, in what would be one of America’s most insidious misinformation campaigns, rewrote history and redefined the Confederacy and the South as noble victims, rather than the instigators of the Civil War and the subjugators of an entire race of people. In order to truly reunify the nation, the mythologists contended, Southern whites would have to be reevaluated and redefined as the ones who had been subjugated. The Lost Cause included, not insignificantly, casting African-Americans as a common enemy of both the North and the South, rather than the old confederates or the invading Yanks as the evil-doers.

This false impression -- this mythology -- continues to resonate from a time when Confederate generals were dutifully repackaged as reluctant, underdog heroes fighting against long odds, rather than the traitorous villains they actually were. From that, we get this ludicrous zombie fantasy that the Confederate flag is solely about Southern heritage. But, again, we have to ask for specifics: the Southern heritage of what? And, again, the answer has to be nothing short of slavery, secession, mass death and treason.

Burns also touched upon how the Lost Cause was amplified by early cinema, including "Birth of a Nation" and "Gone with the Wind." Naturally, these are the two most recognizable examples of Lost Cause filmmaking, but other titles were considerably more horrendous in portraying African-Americans and former slaves as rapists and layabouts. By the first decade of the 20th century there were 10,000 movie theaters in America, and many of the very short, very awful silent movies exhibited in those theaters make D.W. Griffith’s "Birth of a Nation" seem tame. There was a series of shorts by the Pathé brothers, who created bastardized versions of minstrel shows. These shorts featured stereotyped black characters like Rastus, Mammy and Little Black Sambo. The Rastus films, in particular, sported racist titles like "How Rastus Got His Chicken" and "Rastus in Zululand" (the latter is described as a story about "a darky who needs warmth").

Filmmakers who carried on the Lost Cause reunification effort presumed that African-Americans didn’t possess a cultural identity and therefore their identities could be entirely invented for them, without their consent. What emerged was wholesale cultural fiction for the purposes of reflecting preexisting white bigotry and fear: the manufacturing of the stereotype of the black man as a lazy, shiftless, unpredictable, sex-crazed thief. The mid-19th century legend of the aforementioned Sambo, for example, was that of a slow-witted, subservient "darky," who could at any moment transform into a frothing rapist.

The synopsis for the film "Minstrels Battling in a Room" (1896) reads: "black minstrels beating up a white man with bottles." There was "Prize Fight in Coon Town," described in the distribution catalog as featuring "two bad coons." Again, these were all legitimate movies. There was "The Interrupted Crap Game," a movie about two black men who interrupt a round of dice in order to run after a chicken. The African-American characters in another film are described like so: "These darkies are of the 'Old Virginny' type," whatever the hell that means. Another movie is summarized as, "the catching, tarring and feathering and burning of a Negro for the assault of a white woman." Again, the Sambo rapist stereotype is carried on from one film to the next. (It's worth noting that there was a chain of "Sambo's" fast food restaurants in U.S. well into the 1980s.)

All of these unforgivably horrifying films, and many others, were produced in service of casting blacks as villains, and Southerners as forlorn heroes who -- whoops! -- bungled their way into a war.

Sadly, this attitude is alive and kicking in 2015. Indeed, it's being fed and exploited by the Republican Party frontrunner. It's no mistake that Ken Burns called out Donald Trump's involvement with the Birther movement as a clever form of saying the "n-word" -- as a means of demonizing a leader, President Obama, based solely on the color of his skin, just as the Lost Cause had done so many decades earlier.

And as if on cue, a Trump supporter at a rally over the weekend shouted "white power" during Trump's remarks. Why? Because Trump is encouraging and actively courting these kinds of people.

Worse, a Trump spokesman appeared on CNN's "State of the Union" and refused to repudiate the supporter's words, saying: "I know there were 30-plus thousand people in that stadium. They were very receptive to the message of 'making America great again' because they want to be proud to be Americans again." Subtext anyone? During the same segment and in response to an attack on an Hispanic homeless man in Boston by two alleged Trump supporters, the spokesman replied, "We should be proud of our country, proud of our heritage, and continue to be the greatest country in the world." Yep, it's impossible to be more tone-deaf than that.

What's most astonishing about Trump and the modern GOP's continued embracing of Southern Strategy race-baiting (borrowed directly from the Lost Cause mythology, by the way) is that so many Republicans appear to be in complete denial of it, in spite of its obviousness. Hell, former chairman of the RNC, Michael Steele, apologized for the racial politics of the GOP's Southern Strategy -- which Trump is using liberally today. Yet, other than Steele, they refuse to own it. They refuse to take responsibility, even though they claim to be members of the party of personal responsibility. Thus, anyone who's screeching at Ken Burns today is merely delusional about their own racism, hatred and ignorance of history. And that goes double for Trump supporters.