Dr. Ruth is wrong about asexuals: It's a legitimate sexual orientation, not a problem to be solved

Asexuals are speaking out against sex-positivity that marginalizes them 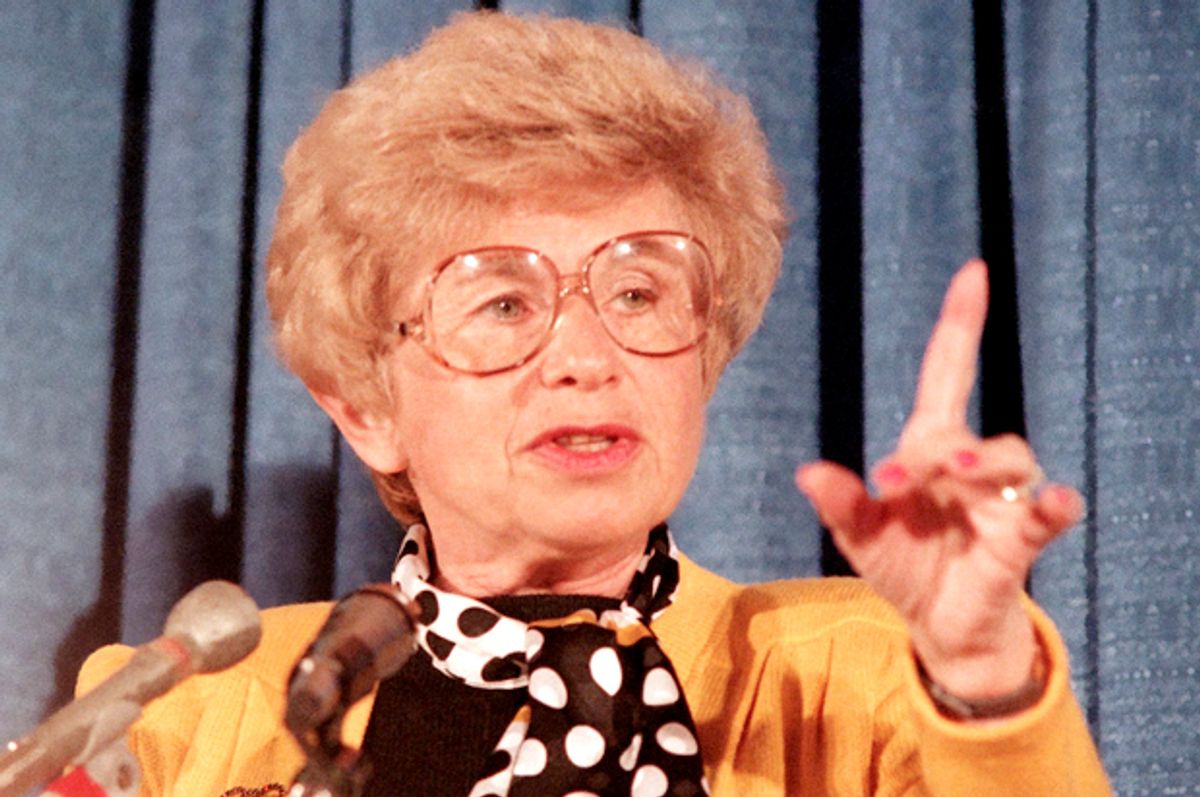 According to Dr. Ruth Westheimer, asexuals are doing it wrong—or rather, not doing it wrong. Last week, the 87-year-old sex therapist Tweeted, “Studies say 1% of pop. is asexual. To me that's 1% too much but sexuality is a spectrum so good that it's so low and not 10%.”

The critical response was immediate:

For those not familiar with the term, an asexual is, according to The Asexual Visibility & Education Network (AVEN), “someone who does not experience sexual attraction.” Sounds simple, right? Not so fast. Even as asexuals are increasingly coming out and expanding the definition of the term, too often, in mainstream culture, asexuality is dismissed or problematized, or treated simply as less worthy than being sexual, as Westheimer did.

The thinking behind Westheimer’s post—that asexuality is a problem to be solved, even while she mentioned but glossed over the idea of sexuality existing on a spectrum—is disturbing. If sexual freedom—meaning the rights of adults to make their own autonomous decisions about how to conduct their sex lives—is a goal, then asexuality has to be part of that vision. As Feministe guest blogger Ze wrote in 2012, “many asexual people often describe the sex-positive movement as unsafe for them…when discussions of asexuality occur in public places, concern trolling about the health of asexual people often abounds — up to and including outright denial of asexuality — as does demonization of asexual people in romantic relationships.” Dr. Ruth’s assertion in no way helps either asexuals—or anyone else.

Tom Schrantz, 35, creator of AsexualityArchive.com, told Salon that “what hurt most” about Dr. Ruth’s comment was that it “went beyond simple ignorance of asexuality, and said that we shouldn’t exist. Someone in her position should be celebrating the diversity of sexual expression, not attacking it, even when that expression is ‘no thank you.’” Schrantz also responded directly to Westheimer on Twitter, noting, “Asexuality is an orientation like any other. There's nothing wrong with us.”

Schrantz knows firsthand how harmful ignorance about asexuality can be—and the direct damage it can cause. “Before I knew what asexuality was, I rarely talked to anyone about how I felt,” he said. “When the conversation turned to sex, I mostly kept my head down and tried to stay out of it, out of fear of being asked uncomfortable questions or being made the center of the conversation. I had a girlfriend once and sex (and my lack of enthusiasm for it) was a frequent subject of awkward and painful conversations.”

The lack of visibility of asexuals can be haunting, especially in a culture where sex is considered a mark of maturity. Schrantz said the ubiquity of sex helped further his own sense of alienation, before he heard the word on a TV show four and a half years ago and “knew it fit me immediately.” However, it took him a long time to realize there was nothing wrong with him because he lacked sexual desire.

As he explained, “For years, I’d see my friends talk about good-looking women, I’d see TV talk about how I couldn’t be a real man if I weren’t sex crazed, I’d see almost every movie rewarded the hero with sex for saving the day, and all of that started to get to me. Pretty much everyone talks about sex as being this amazing, world changing thing, but when I had sex, I remember getting bored and wondering if I could stop without offending my girlfriend.  I wondered what was wrong with me. Why wasn’t I interested?  How could I make myself interested? What would it take to fix me and let me be ‘normal?’ That’s why I got into asexuality activism: I don’t want anyone else to go through what I did.”

According to journalist Rachel Hills, author of "The Sex Myth: The Gap Between Our Fantasies and Reality," Westheimer’s statement was “out of touch and alienating,” but it wasn’t, however, a shock. “Dr. Ruth grew up in an era where celebrating sex was a radical act,” Hills said. “It’s not surprising to me that her vision of sexual freedom might be one that focuses more on validating the joys of sex to the exclusion of validating the right not to have it.” Because the term asexuality has only been used for about the last 15 years, increasing in prominence, especially online, more recently, according to Hills, “It’s going to be a lot easier for a 22-year-old on Tumblr to accept asexuality than 87-year-old Dr. Ruth. But sex is so central to how we structure our society, relationships, and cultural narratives that it’s difficult even for a lot of people much younger than Dr. Ruth to get their heads around the idea that some people just aren’t interested in sex.”

This is not the first time Dr. Ruth has been called out by asexuals for misinformation. Blogger The Asexual Sexologist responded to a 2011 advice column by Westheimer (no longer accessible by the original link on The Chicago Tribune) in which the therapist stated that a 25-year-old heterosexual woman with zero libido couldn’t be asexual because she’s able to have orgasms. Spoiler alert: asexuals can masturbate and have orgasms, a topic that’s expanded on at Asexuality Archive’s post “An Asexual’s Guide To … Orgasms.” Again, Westheimer’s assumption that sex and desire are always preferable got in the way of her offering helpful advice to a reader with a legitimate question.

In an undated question on Westheimer’s website, a woman who says she has no interest in touching and kissing her boyfriend was given this advice: “…each individual matures at a different rate, and the fact that you’re not ready for love or sex probably just means that you have to wait a bit more. There are very few people who remain asexual their entire lives or who never fall in love, so I would guess that your sexuality will come to the forefront in the near future.” While it’s of course possible that this woman will at a later date experience a change in her sex drive, it’s equally possible that she will not. There’s no reason for Westheimer, or anyone else, to judge—or nudge—someone away from asexuality. Rather, those in trusted positions such as Dr. Ruth should be offering guidance and support for those of all sexual orientations, especially asexuals, given the ignorance and erasure they still face, as detailed above.

Furthermore, as it turns out, the oft-cited 1 percent figure that Dr. Ruth mentioned may or may not be accurate. According to Andrew Hinderliter, owner of the website Asexual Explorations, which “exists to promote the academic study of asexuality,” that number is based on “a 1990 survey done in the UK who said that they had never experienced sexual attraction to men or women. The survey did not ask about asexual identity. A follow-up survey from 2000 found a considerably smaller rate of asexuals. Depending on the definition and the population, studies have generally found between 0.5% and 8% of people are asexual.” But whatever the true number, the figure shouldn’t be used to belittle asexuals; if anything, the fact that they are an often-misunderstood minority should be cause to offer more empathy and resources.

Schrantz says that simply recognizing sexuality as a legitimate orientation would be a major step toward helping those who are, or might be, asexual recognize and embrace their identity. “The most important thing for sex educators to do is to simply start talking about it,” he advised. “Start including asexuality when they list sexual orientations. Start telling people that there’s nothing wrong with not finding people attractive or not being interested in sex. If my high school sex ed class had used the word ‘asexual’ even once, that would have saved me fifteen years of pain and confusion.” Dr. Ruth, take note!