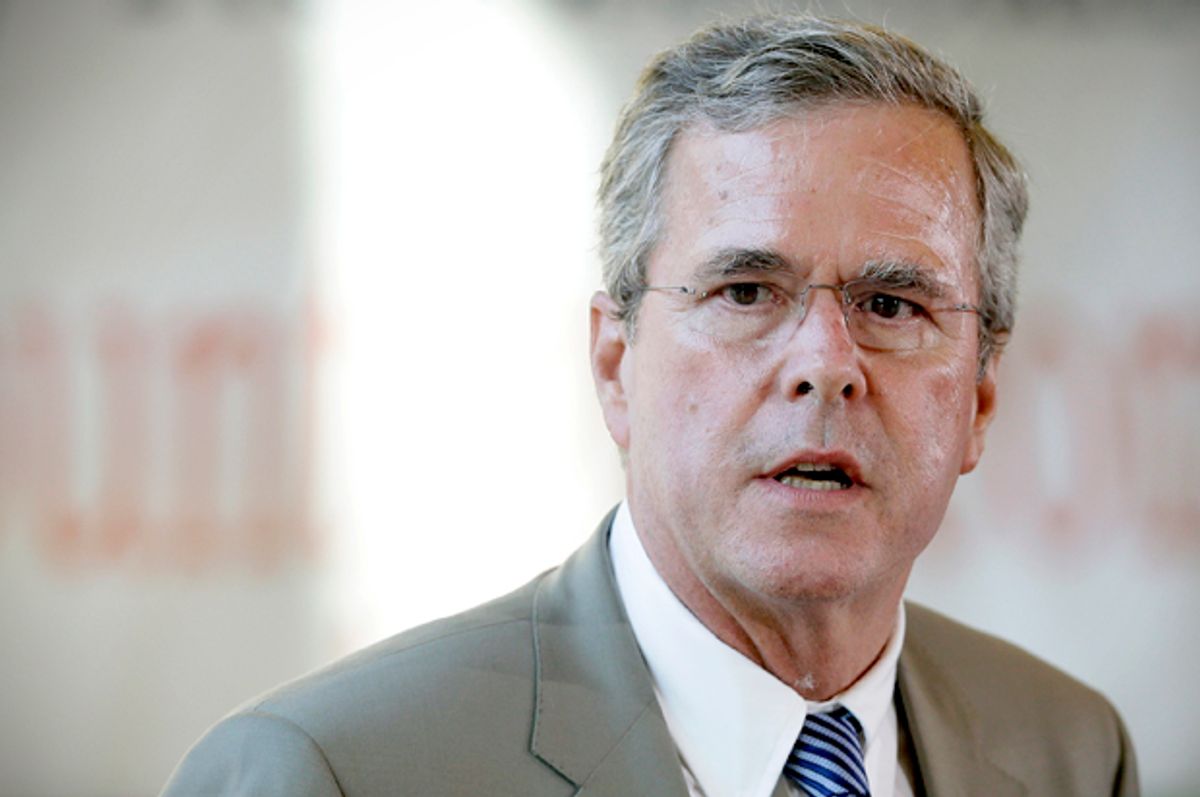 Republican presidential candidate Jeb Bush just made Asian America very angry. Or, more accurately, as Donald Trump tweeted: Asians are “very offended.” (Thanks for being offended on our behalf, Don!)

The political tempest began when Jeb Bush tried to explain what he meant by “anchor babies” during a campaign stop in Texas. The term “anchor baby” is understood to belittle and stigmatize the children of immigrants, for it implicitly frames pregnancy and childbirth as a scam to game the immigration system. No, no, Bush protested, he wasn’t targeting Latinos, even though he was standing on the border between Mexico and the U.S. when he made his original comments.

“What I was talking about,” he explained patiently, “was the specific case of fraud being committed where there’s organized efforts and, frankly, it’s more related to Asian people coming into our country.”

So organized Asians are the new organized crime, committing fraud by way of Trojan horse-type babies?

It is true that some aspirational Chinese have been taking advantage of “birth tourism” for a variety of reasons, but it is also the case that these cosmopolitan couples typically take the infant back to the Old Country with them, leaving behind tens of thousands of dollars in fees, in hopes of sending Junior back to the U.S. when he is old enough for college — which they also intend to pay for, through the nose, in full-freight tuition, books, room and board. In other words, “birth tourism” and “anchor babies” are diametrically opposed phenomena, with one reflecting the privileges of relative wealth, and the other the insults of disenfranchised poverty.

This is a vastly oversimplified picture, of course, but that oversimplification is partly why Jeb Bush’s “Asian people” comment has kicked up a backlash on social media. In one sentence, Jeb not only managed to unify all of Asian-America into a single voting bloc, he made that bloc highly disinclined to be voting Republican in the next election:

Historically, the Asian-American vote has been a swing vote. This is partly because “Asian-America” is not a homogeneous group of math geniuses and spelling bee champs playing the violin in San Francisco and New York. The term has an immense geographic reach, with “Asian” encompassing the Pacific Islands, the Far East, Southeast Asia, and the Indian subcontinent. The U.S. census bureau lists Chinese, Taiwanese, Filipinos, Vietnamese, Koreans, Japanese, Asian Indians, Malaysians, Pakistanis, and so on, under this “Asian” umbrella. Each country of origin has a distinct language, cuisine, history, and culture, but once these groups become U.S. citizens, they are all “Asian-American” — currently a population of 20.5 million, and one of the fastest growing voting groups in the U.S.

And yet a Bush just told the highest income-earning, best-educated minority group in America that Asians of all kinds don’t really belong in this country, including the legal ones. (As Jamelle Bouie pointed out in Slate, the message is clear: The GOP--Not just Anti-Hispanic anymore!) Because you can’t tell just by looking who is—and is not--an American citizen.

Blogger Grace Hwang Lynch has noted that the term “anchor baby” may actually stem from the wave of Vietnamese refugees in the 1980s, the youngest of which were derisively called “anchor children.” A frank essay by Marie Myung-Ok Lee, “I Was an Anchor Baby,” published five years ago but sadly more urgent today, helps illuminate the deficiencies of “anchor baby” when applied to real-life families. Lee’s father was an anesthesiologist in Minnesota, doing specialized work in a community where physicians were few and far between, and yet he still was unable to gain citizenship through the usual channels. Though she and her siblings were born in the U.S., Lee writes, “my existence did nothing to resolve my parents’ situation; if anything, it only added to their stress.” Because having an “anchor baby” does not magically confer citizenship on the parents, and a child cannot sponsor them until she is 21.

Her story illuminates the fault lines in the political framing of immigration, children, and birthright citizenship, which is, now more than ever, an Asian-American story. It is also a hashtag on Twitter: #MyAsianAmericanStory, complementing efforts by the likes of actor and social activist George Takei, who made a new video protesting Trump’s stance against “illegals.”

Asian America may be angry and offended, but mostly, thanks to Bush and Trump, it’s getting organized. As far as GOP outreach to minority voters is concerned, it may just be that the political ship has already sailed. Anchors away!