Remember when these two were the clear frontrunners? Because right now they're clueless 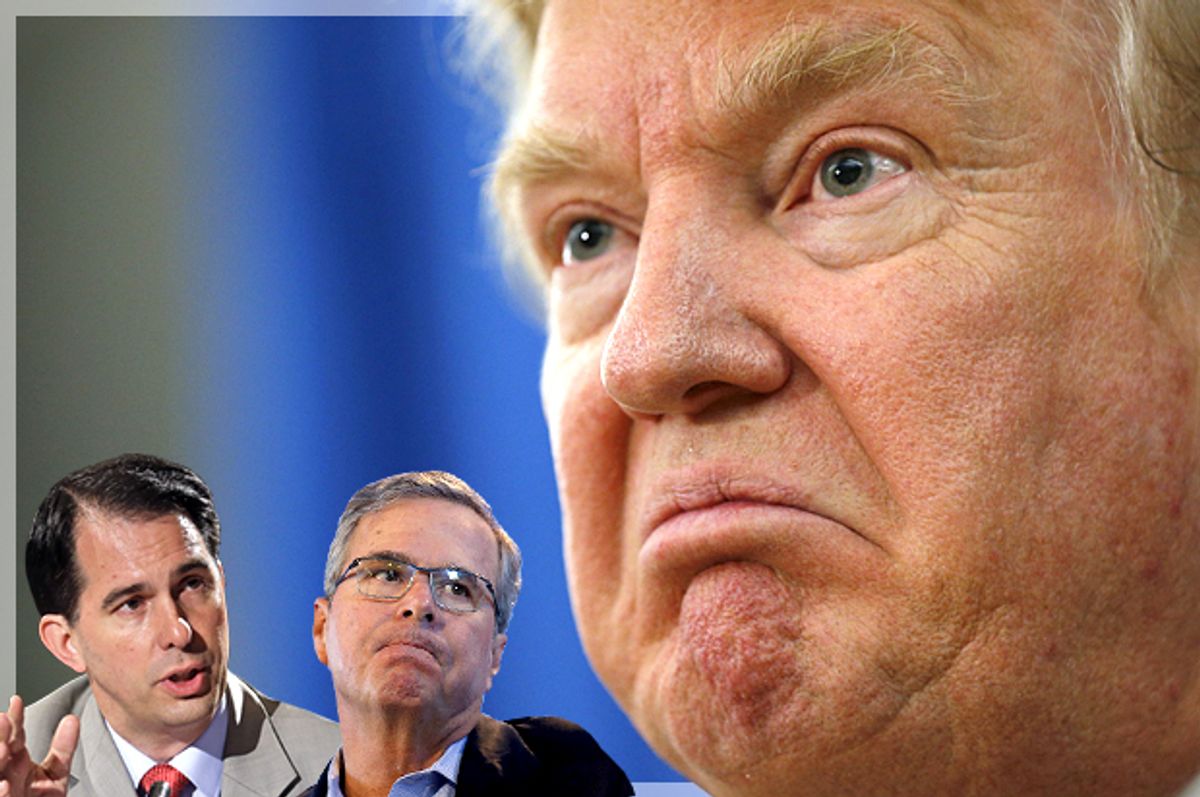 Maybe Bill Kristol was right: this GOP field is just one dope after another, trying to out-dope each other, failing, and letting America's ultimate dope comfortably expand his lead.

Let's just consider how well two of the alleged frontrunners, Scott Walker and Jeb Bush, have been handling the Trump menace this week. We've been mocking these two poor, hapless souls a lot recently. That's because they keep doing highly mockable things. They kept it coming yesterday, too, with further comical assaults on their dignity that we're going to guess will not substantially cut into Trump's lead.

Scott Walker. This guy. We caught another glimpse of "newly aggressive" Scott Walker in the wild yesterday as he attempted to work Trumpism into his limited repertoire. The first rule of Trumpism is that no one else should try it unless they want to look like an idiot. Donald Trump looks like an idiot, too, when performing Trumpism, but he is some sort of outer space alien obeying an alternate physics wherein idiocy is the goal and the reward in and of itself. Scott Walker, meanwhile, obeys standard earth physics, wherein things like this stunt from yesterday are idiotic in the classical bad sense.

“Americans are struggling to cope with the fall in today's markets driven in part by China's slowing economy and the fact that they actively manipulate their economy. Rather than honoring Chinese President Xi Jinping with an official state visit next month, President Obama should focus on holding China accountable over its increasing attempts to undermine U.S. interests. Given China’s massive cyberattacks against America, its militarization of the South China Sea, continued state interference with its economy, and persistent persecution of Christians and human rights activists, President Obama needs to cancel the state visit. There's serious work to be done rather than pomp and circumstance. We need to see some backbone from President Obama on U.S.-China relations."

Yes folks, that's Scott Walker seeing on the news yesterday that stock markets have been down due in part to China's dragging economy, and determining that the best response for President Obama would be to cancel a Chinese state visit. Under a Walker administration, only countries with good economies that don't negatively affect the Dow Jones Industrial Average will be invited to feast on Wisconsin cheese and Miller Lite with the most boring human on the planet. This is the first of Walker's stunts that seems genuinely Jindalesque, the term we're now using for any desperately dumb muppet stunt that no one will care about. Because Walker and Jindal are now, effectively, in the same ship: dozens of percentage points behind Donald Trump, with no clue what to do about it. China-bashing? Sure, China is bad. Everyone knows that. Let's absolutely increase tensions with China because their economy isn't doing very well.

But on Monday during a visit to Texas near the US border with Mexico, when responding to a question about whether the "anchor baby" row would hurt his ability to win the Hispanic vote, Bush said the situation has more to do with other immigrants.

"What I was talking about was the specific case of fraud being committed where there's organized efforts -- and frankly it's more related to Asian people coming into our country, having children in that organized effort, taking advantage of a noble concept with birthright citizenship," Bush said.

The guy goes out last week, intending to speak with a little "severely conservative" fire in the belly, and says "anchor babies." Then he spends the whole next week getting snippy at people who ask him why in hell he is saying that when he's supposed to be the candidate who'll extend the GOP's reach with Hispanic voters. And now -- I mean, this is too good -- he says, Actually, I was talking about Asian people. (Asian Americans: another vote-rich sector where the Republican Party is just cuttin' it up.)

There have been reports of a nascent "birth tourism" industry in China that, for a price, sneaks wealthy Chinese mothers into the country to have children. That is not the main preoccupation of nativists. They use "anchor babies" specifically to describe the non-phenomenon of pregnant Mexican women sneaking across the border "in droves" to pop out a kid and then use that "anchor" to earn themselves some of that sweet, sweet citizenship decades later. When Jeb Bush said "anchor babies," this is the demographic to whom he was appealing. But now he's managed to make generalized broadsides against Hispanic and Asian Americans, and all the white people who loves this stuff still don't love Jeb.

There is a new poll out this morning of New Hampshire Republican voters. Donald Trump has 35% of the vote in that state -- all he needs in a crowded field. Scott Walker and Jeb Bush are tied with 7% apiece. These results directly correlate with the quality of campaigning we've seen from all parties over the past couple of weeks.