Two people were murdered on live television today. How are we as a society supposed to reckon with such mayhem? 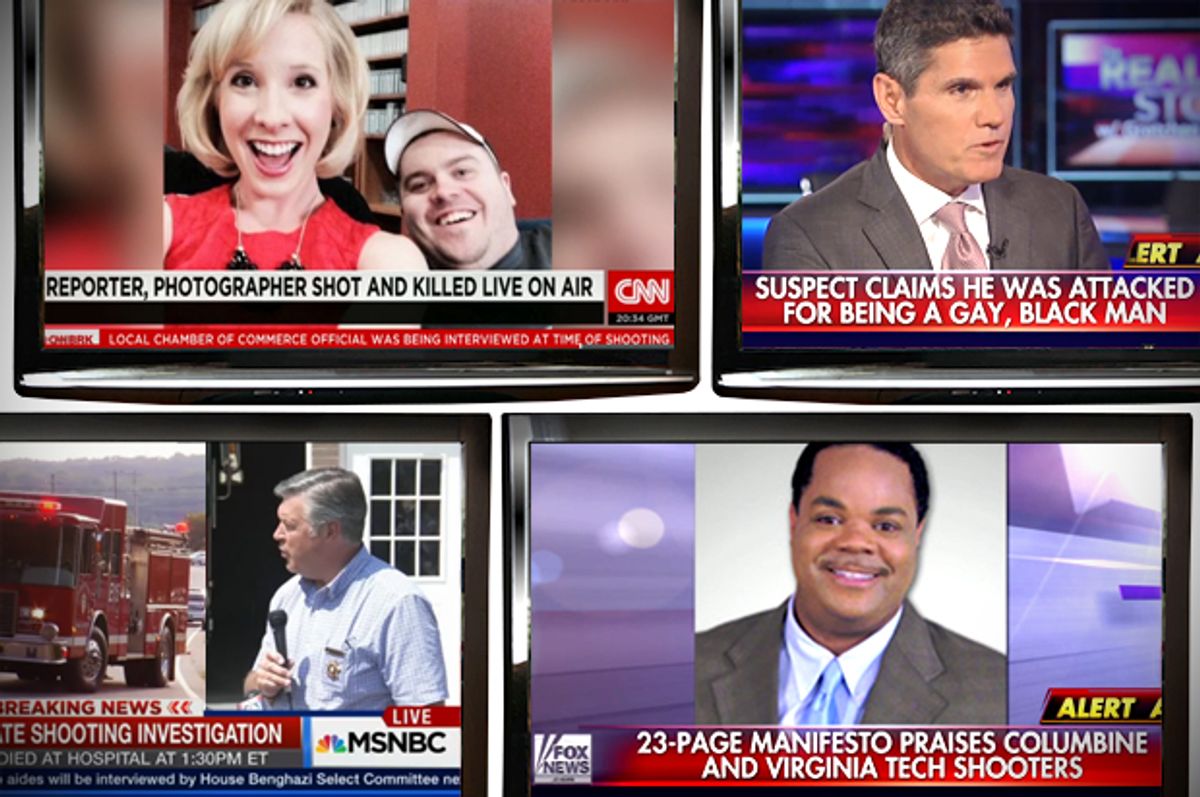 At first glance, the utter normality of what was happening before two journalists were murdered on air in Virginia feels like the most shocking thing about their killing.

WDBJ's Alison Parker and Adam Ward were struck down just as they were reporting a segment about tourism at a local lake. If you watch the video—and you certainly don't have to—the chasm between the relatively banal feature and the horror that disrupts it is profoundly disorienting. Our instinct to make sense of the senseless kicks in. Surely that can't be it? Surely these two people could not have just been slain in front of us while doing something so routine?

But of course people are regularly doing the routine when they are shot dead. Think of the people reading their Bibles in Charleston, or going to elementary school in Newtown, or buying groceries in Tucson, or walking in the park in Chicago. We can now add Parker and Ward's names to that shameful list.  Our country is soaked in the blood of innocent people killed in the midst of normalcy.

Everything took a turn into some dystopic sci-fi universe, however, when Vester Lee Flanagan, the alleged murderer, appeared to begin live-tweeting his own account of the killings and posted new video that he'd taken himself. (Flanagan, a former WDBJ employee who had a nasty falling-out with the station, eventually shot himself after being pursued by police.)

It felt as though we'd taken a nauseating but inevitable leap into the future, our culture of violence catching up with our culture of technology. We share every aspect of our lives on social networks all day, all of the time. Flanagan took that fact to an incredibly disturbing place, but his underlying instinct—to tell the world about what he was doing—is the same as anyone's. It seems horribly likely that he will not be the last killer to so gleefully document his crimes in real time. Really, the surprise is that nobody did something like that sooner.

Flanagan's tweets feed into what is fast becoming a dominant societal conversation. What exactly are we to do when such things are thrust into our Twitter feeds or Facebook timelines? Coming so shortly after the Ashley Madison hack, it feels like we are being confronted with the darker implications of our current technological landscape in ways we don't quite know how to handle yet. We should have been thinking harder about this long ago, when women were reporting their daily battles with online abuse and when black victims of police violence had the video of their killings posted and reposted and aired on a loop with relatively little debate, but Flanagan seems to have unwittingly wrenched us into even fresher territory. We live in a world where a murderer becomes a perverse kind of citizen journalist, giving us second-by-second updates about himself. How are we to respond to such a world?

There are no easy answers to these questions for journalists, whose job it is to bring people the news. What should the media do with such horrible imagery? The instinct to suppress is understandable. These are real victims with real families who may be further traumatized by seeing their loved ones' deaths again and again. Why put them through that? Then there are the very real concerns people have about ways that media coverage of shootings winds up turning the killers into darkly glamorous figures and giving potential murderers a kind of blueprint for the future. (For a particularly relevant example of this we need only read the manifesto Vester Flanagan sent to ABC News. "I was influenced by Seung–Hui Cho," he wrote, referring to the Virginia Tech shooter. "That’s my boy right there.")

The standard reply is that it is unfortunately not the job of the news media to protect people from tragedy, no matter how horrible, and that, while journalists should do their jobs responsibly, to withhold relevant information because it is difficult to handle is to tell a kind of lie about the world. There are also racial, global and technological wrinkles that further complicate this back-and-forth. Put simply, our level of concern about the effect that disturbing footage has sometimes seems to coincide with the established hierarchies of our society.This is a debate that has played out for about as long as journalism has been around, but it's taken on a distinct urgency in the digital age. Journalists are confronted with two parallel facts: There is more information being put into the world than ever before, and they have less control over the dissemination of that information than ever before.

Anybody who tells you that they've figured out a coherent response to those facts is lying to you. Nobody knows what to do with something like the WDBJ video. (I should stress that I'm talking about the footage of the WDBJ broadcast which showed the killings, not Flanagan's own videos, which I think one can refuse to share without losing any sleep.) Post it with a warning? Link to another site that's showing the video? Refuse to have anything to do with it, even though that won't stop anyone from being able to see it?

You could almost see different outlets groping for the right approach today and not finding it. CNN, for instance, was lambasted for announcing that it would only show video of the WDBJ killings once an hour—a strange-sounding compromise, but one that perfectly sums up the murky waters we find ourselves in. I am not even going to attempt to craft a new ethics policy here, because I don't have any cohesive answer myself.

There is one thing, though, that could help all of us alleviate the need for this painful discussion, and it's the same thing that could have saved thousands and thousands of people from dying as brutally as Alison Parker and Adam Ward did. Until America confronts its gun culture—until we decide as a people that we would rather live in a country that didn't send so many innocent victims to the slaughter—all other questions are secondary. The events in Virginia are indescribably sad. Each detail we learn makes the story more painful. Yet perhaps the saddest thing is that we have to ask ourselves how to cope with such events so incredibly, infuriatingly often.