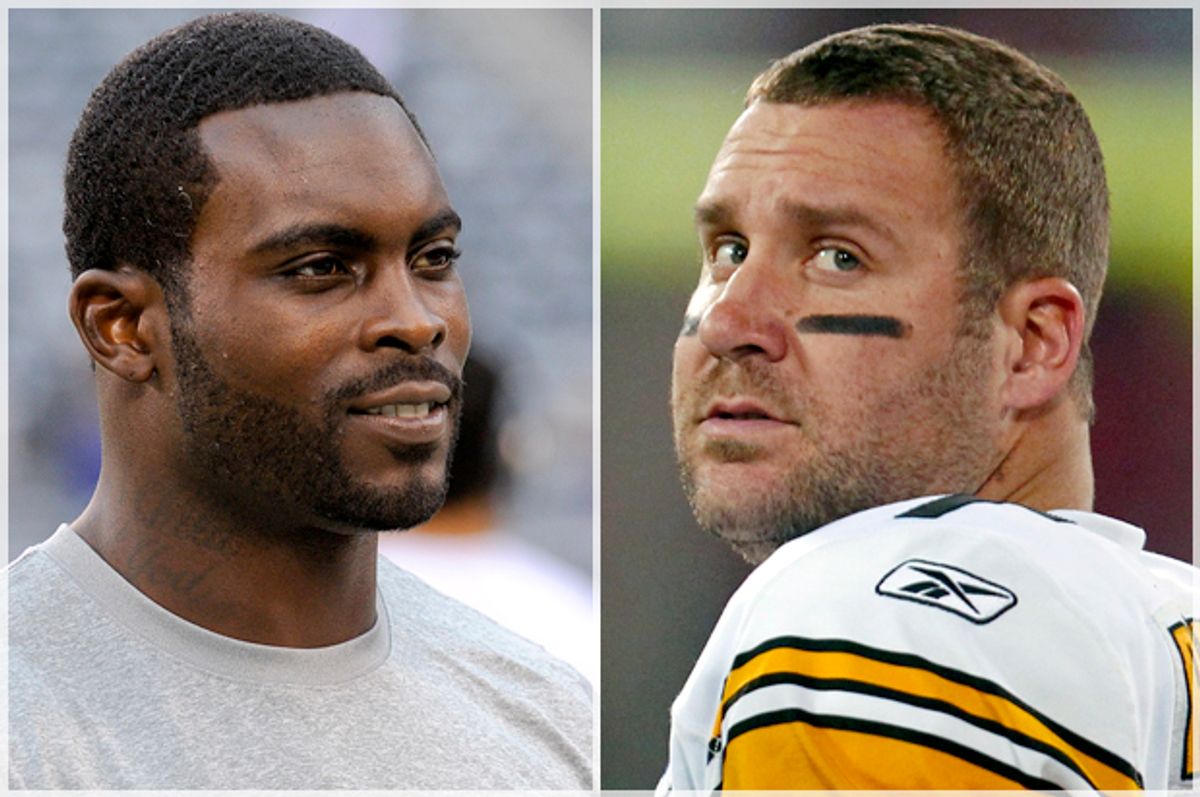 I live in western Pennsylvania, so my social media feeds exploded yesterday, with the news that the Pittsburgh Steelers had signed Michael Vick to a one-year contract as a backup quarterback.

The outrage, of course, comes from Michael Vick’s history running a violent dog-fighting ring out of his house. The tortures and deaths of countless pitbulls at Bad Newz Kennels still haunt many people; animals are often seen as the ultimate innocent victim, and Vick’s plea bargain, and subsequent repentant interviews feel at worst disingenuous, and at best like too little, too late.

In other words, I’ve heard a lot of racially-coded language that reminds me that black men are easily cast in the role of criminal, and have an almost-impossible time shaking it off.

And I understand what’s at the heart of these sentiments. Three years ago, I adopted a sweet boxer mutt from a shelter in Kansas, who came home with me malnourished, a mere 35 pounds, his ribcage showing through his skin, cuts and scars all over his head. I don’t know anything about his past, but I know he had a rough life, and I know how it feels to have taken him away from whatever hurt came before.

So I understand why the images of pitbull victims haunt us still, and I understand if people don’t feel comfortable watching Vick return to the spotlight.

What I don’t understand is why almost no one expresses that same discomfort over the guy first in line for Vick’s job.

Ben Roethlisberger, the Steelers first-string quarterback and all-around golden ticket, has been accused twice of sexually assaulting women: in 2008, and again in 2010. And while it’s true that Roethlisberger hasn’t faced criminal charges for either of these crimes, that doesn’t convince me at all that he’s not guilty.

At the very least, we know that his defense team used character assassination against his first accuser, who declined to press criminal charges for fear she’d lose her job. We also know that his second accuser was in her early twenties, a college student, and was so intoxicated at the time of the alleged assault she had to be dragged to the back room of the club.

We know she and her friends went to the first police officer they could find. And we know that the hospital she was taken to found bruising and bleeding in the genital area.

We know that his second victim, like his first, eventually asked that a criminal case against Roethlisberger not be pursued. We know how incredibly common this is among rape victims, and how unlikely a conviction would have been, had charges been pursued.

When Steelers fans talk about Ben Roethlisberger’s behavior, this is what I hear:

I’ve heard people say that Roethlisberger hasn’t been convicted of anything. I’ve heard that his alleged crimes are different because his victims ‘put themselves in that position.’ I’ve heard that the victims were probably only after his money.

Listen, I’m glad Michael Vick is still getting attention for his crimes. I’m glad people are still protesting, and writing articles, and asking him questions.

This is how the system should work. Michael Vick may or may not truly repent for his crimes, but his name has become synonymous with this issue. Regardless of the fact that he’s continued to play professional football, his whole life has been about the crime of dog fighting—and that’s exactly how it should happen.

I believe the only way people truly become repentant, the only way people can truly change, is when – whether because of their own conscience or the rising tides of public opinion – they are forced to spend their life making up for what they’ve done. Not a day goes by that Michael Vick doesn’t have to say, somewhere, to some reporter, that he did something wrong. Not a day goes by that he isn’t reminded. And as a result, he’s dedicated many of those days to making things right.

It’s entirely possible that his actions, financial donations, and public advocacy for animals have been the result of either a plea bargain or a PR team. He may not mean any of it. But I don’t actually care, because he’s doing it anyway. This is how he pays his debt to society.

We should be holding Michael Vick up as an example to all the domestic abusers and drunk drivers and gun-carriers in the NFL. Own up to what you’ve done. Take the heat. Work through it.

The critics are right about one thing: Roethlisberger hasn’t been found guilty in a court of law, and I won’t call him a rapist here. But I think Ben Roethlisberger should face serious questions about what happened on these nights, and should have to answer for his mistakes, beyond a six-game suspension for violating the NFL's "personal conduct" policy, which Roger Goodell ended early for "good behavior."

And I know that he won’t.

I want Ben Roethlisberger to have to live up to his "personal conduct" the way Vick has been forced to. I want to see Roethlisberger advocating for rape victims, encouraging women to report, donating some of his salary to RAINN, or helping to establish shelters for women in Pittsburgh. He can use the same language as Michael Vick; he doesn’t have to admit criminal culpability. Even just the whiff of a public relations problem should be enough to get him to take some action, to stand up, to say something.

This is why I can’t take seriously the football fans who are up in arms about Michael Vick joining the Pittsburgh Steelers. I can’t take you seriously when you talk about hiring players on the basis of character, or the quality of person we want living in our city, and playing for our team, when they’re only talking about Vick.

I’m just waiting for people to expect the same from Big Ben.

Marissa Landrigan's essays have appeared in The Atlantic, Creative Nonfiction, Orion, Guernica, The Rumpus, and elsewhere. She is currently an Assistant Professor of Writing at the University of Pittsburgh - Johnstown, and can be found online at marissalandrigan.com.