Lessons from the Britpop wars: Brush off the pre-social media era dust and the relics of 1995 feel almost fresh again

20 years ago, Oasis and Blur were the center of an epic battle for top of the charts and fan allegiance 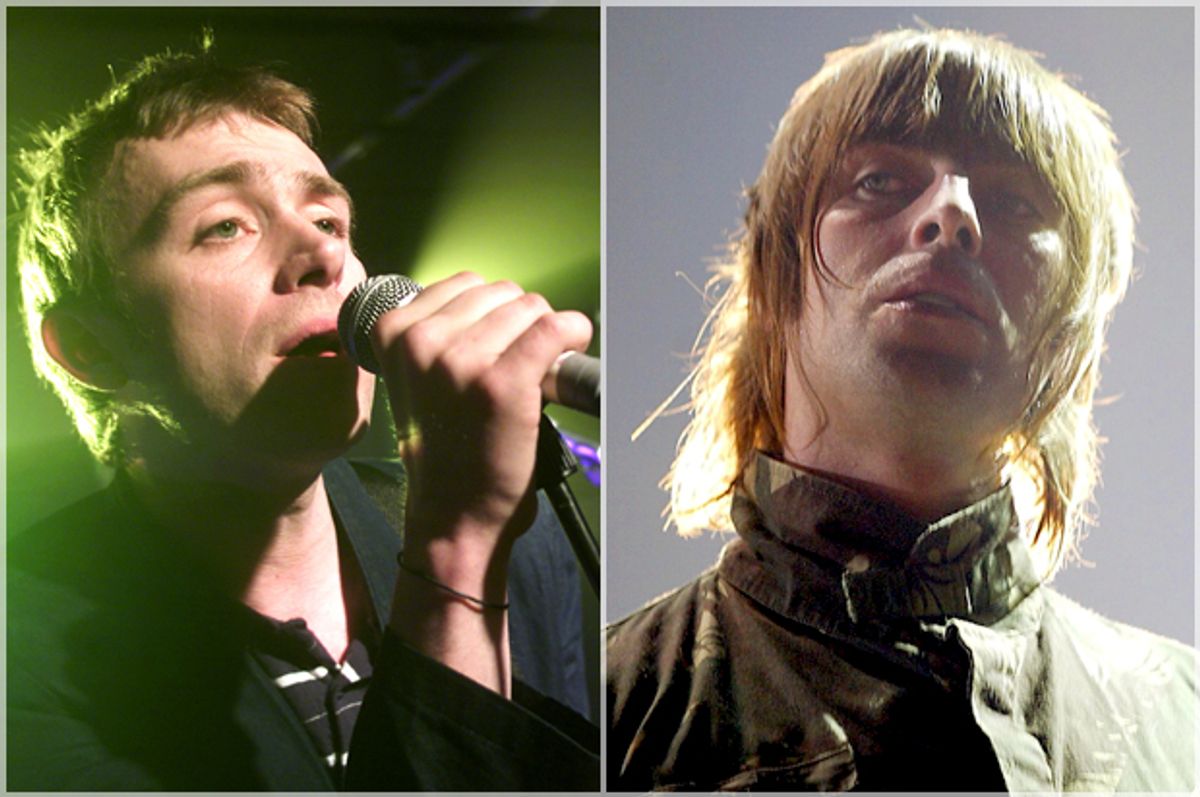 The Britpop movement rose to prominence in the early ’90s, buoyed by a crop of fresh-faced bands who put a modern spin on glam, mod rock, ’60s pop-rock, post-punk and skinny-tie power-pop. Suede took the flamboyant crunch of Bowie’s theatrical Ziggy Stardust era and added a dash of Roxy Music’s lush romanticism; Blur shapeshifted between XTC-caliber cleverness and Kinks/Jam-esque slice-of-life songs; and Oasis expertly combined the Stones’ swagger with the Beatles’ songwriting approach. Pulp, meanwhile, existed on their own planet, with their combination of new wave noir, droll humor, and political and societal critiques. So did Elastica, who paid homage to Wire’s brevity with artsy precision and attitude. While Britpop’s second and third tier certainly had their fair share of best-forgotten bands, there were standouts, too—among them, Smiths acolytes Echobelly and Gene, and cheeky rock band Supergrass.

In August 1995, Britpop reached a fever pitch, when Blur and Oasis battled it out for the No. 1 spot on the U.K. singles chart. The former was releasing “Country House”—the first single from new album “The Great Escape”—while the latter was unleashing “Roll With It,” from their second LP, “(What's the Story) Morning Glory?” In typical over-the-top British press fashion, this was dubbed the “Battle of Britpop” or the “British Heavyweight Championship,” and came with band members sniping at each other and breathless reporting. (Spoiler alert: Blur won the sales race.)

This event was simultaneously Britpop’s apex and nadir. At the time, both Blur and Oasis were massively popular in the U.K., coming off of the “Parklife” and “Definitely Maybe” LPs, respectively. But framing this battle as life or death was the perfect summation of an era predicated on grand gestures and sweeping generalizations at the expense of nuance. The chart competition wasn’t just about positions or a triumph of British pride: It became a war between economic classes and social castes, a way to declare ideological allegiances instead of just musical preferences. Had it happened a decade later, no doubt it would’ve evolved into factions of “Team Blur” and “Team Oasis.”

For England, where the class system is an ingrained part of pop culture and press hysteria is a way of life, this wasn’t an entirely new phenomenon. However, as with many music trends, plenty of this Britpop drama was media-created, or at least media-inflated. These portrayals certainly skewed the movement’s perception in the U.S.: As an American teenager who occasionally imported British music weeklies—and who was fascinated by London, a place that (at the time) seemed like a wondrous place to visit—Britpop was an exotic trend without cultural or societal baggage. It was colorful and intriguing, all snappy hooks, bright instrumentation and larger-than-life characters who were living the lives I aspired to have, while creating music that was an antidote to grunge’s drab climes. Elastica’s sneering attitude resonated with my own bratty teenage self; Suede’s lovelorn fatalism appealed to my own romantic angst; Blur appealed to my love of pop hooks and harmonies. Britpop was a niche part of the already-niche alternative music scene in the U.S., which made it even more appealing: Although this music dominated and permeated U.K. culture, here it was a pathway to being different and somehow cooler.

Perhaps that’s why the bands in the movement—with the exception of Oasis, who found a great deal of success in the U.S., and scene outlier Radiohead—remained mostly entrenched in American subculture circles, the anchors of Britpop dance nights and scattered pockets of fierce Anglophilic fandom. Sure, these bands received MTV and radio airplay, but their mainstream circulation wasn’t necessarily trenchant: Blur’s biggest hit, “Song 2,” in fact, didn’t hit the Top 40—and only peaked four slots higher than “Girls & Boys.” When the band comes to the U.S. in October, they’re doing just two dates, at large venues in New York and Los Angeles.

Thanks to the internet’s ability to excavate and document niche information, Britpop seems more popular than perhaps it was in reality. That doesn’t diminish the strength of the music, of course. All of the bands named above created enduring albums and singles: Just this year, Supergrass’ “Alright” popped up in a television ad for Kellogg’s Frosted Mini-Wheats, while “Song 2” is a staple at sporting events. And even now, the aesthetic of Britpop stands apart from the ’90s nostalgia pack—whether it’s Blur’s goofy pool party scenes in the video for “Girls & Boys,” Elastica’s black-clad post-punk gang look, or Pulp’s debauched-and-debonair approach. For all of Britpop’s surface mania and eventual devolution into lunkheaded laddishness, at its height the groups associated with the movement were creatively energized.

Obviously, those in the U.K. have a much different, subtle perspective on the time. The Quietus in particular has published several illuminating and illustrative essays, including one by Luke Turner criticizing the glowing nostalgia for the era. “It's a celebration of the very conservative, a backward glance to something that was already backwards-looking,” he wrote. “It's not twee, exactly, but it is very Keep Calm And Carry On, it is very cosy, it is very mod, parochial, flag-wavy.” In his experience, Britpop calcified his then-diverse musical tastes: “Britpop's narrow aesthetic, and that of the media that lauded it, ruined all that, turning me into the kind of wally who'd list the 'right' bands on their school ruler.”

Another essay written by Taylor Parkes used the framework of Blur’s “Parklife” to discuss Britpop’s apathy and lack of enlightenment: “A whole generation playing dumb? Dunno what you're on about, mate. Cheery sexism? Shut up love, it's only a bit of fun. The armour-plated smugness of a new liberal bourgeoisie? Chill out you knobhead – have another line.” At the same time, “the other side were busy consolidating all the gains of the hated 80s, privatising and deregulating, getting ready to take this s**t to the next level, unopposed. What did the heroes of Britpop have to say about that? Bupkis at best.” It’s not a stretch to see the parallels between the mindsets described here and what’s going on in the U.S. at the moment.

Reading these U.K.-based remembrances of Britpop, what’s striking is how much historical revisionism (or ignorance) plays into how Britpop is remembered. The musical lineage of these bands is about the only straightforward thing about the era. Like most musical moments, the era can be perceived to be as shallow or depth-filled as one wants; moreover, the idea that it exists at once in and between high and low culture increases its mass appeal.

Yet it’s become clear that Britpop’s flexible and complicated cultural context—it’s simultaneously overly simplified but yet only starting to be examined with a critical eye—makes it a fascinating topic. In the two decades since its heyday, books such as John Harris’ stellar “Britpop!: Cool Britannia And The Spectacular Demise Of English Rock” have examined the political, artistic and cultural fallout from and impact of the era, and examined the complexities that both fed into and destroyed the scene. Britpop was very representative of a specific time and place, but it foreshadowed a future where fame trumped substantive news, and where unsavory celebrity behavior was even encouraged. In that respect at least, Britpop’s mythology and reality dovetailed rather neatly into something both universal and perpetually influential, in ways that transcend musical precedent.