"Mr. Robot" is the only TV show that actually understands the Internet—down to the last chilling detail 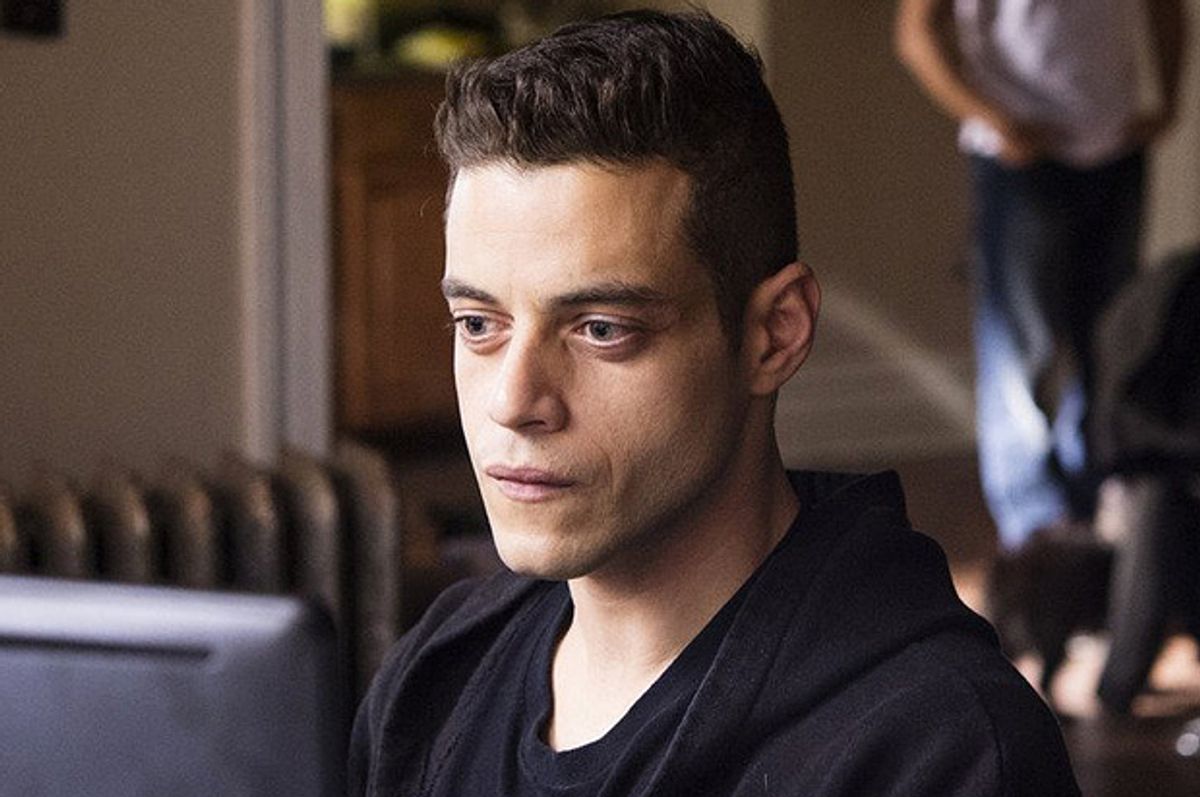 Update: USA announced this afternoon that it is postponing the air date of the season finale, which had been scheduled for tonight, because of "graphic scene similar in nature" to the shooting deaths today of two TV journalists in Virginia. Read the network's full statement here.

When Elliot Alderson—the protagonist of “Mr. Robot,” played by Rami Malek—types code into his Linux terminal, it’s all actual programming. The files are invented, of course, and some of Elliot’s especially brilliant hacks are programs he’s written before, so that they don’t need to be witnessed on-screen. But the rest of the time, the command lines and programming workarounds are recognizably real. Elliot will ssh into servers and sudo command them to give up their secrets; when he talks encryption, he uses the same terms as your wifi router. His people meet on IRC channels. Each episode title is in fact a file name—ending in “.avi,” of course—with similar syntax to illegally distributed torrented files. And naturally, the first episode is not episode one, but episode zero; programmers start counting at the bottom.

I don’t code. But I live in the world of the Internet—which is to say, the world, today—enough to know what it looks like and how it feels. “Mr. Robot” is the first show I’ve seen that lives in that same world. Elliot’s work email looks like mine. His hard drives do what yours do. His social media stalking looks just like yours, too. Other shows have committed, in different ways, to telling stories about the Internet. “Sherlock,” the BBC show, was one of the first to use texting as not just a gimmick but also as a structural component for a whole episode—“A Study In Pink” hinges on GPS coordinates, punctuated by mysterious texts sent back and forth, and Sherlock Holmes' first feat of deduction for John Watson is when he analyzes his new friend’s cell phone. “The Good Wife,” on CBS, routinely tells stories about technology’s intersection with non-networked legal and social norms—such as a case about bitcoin, a discussion of large Internet company’s legal rights, and the time one firm left the webcam on for a whole day while their rival firm took copious notes.

But both of these shows largely eschew discussing any particular technology company or specific product. “Sherlock”’s mobile phones look and work a bit differently from ours, at least here in the U.S., and “The Good Wife” is very careful to not name any large company—instead using ridiculous placeholder names, like “ChumHum” for Google and “YouVid” for YouTube.

“Mr. Robot” doesn’t bother with any of those niceties. One of the most captivating elements to the show is how raw and deep it cuts into this world, the world we live in, the world I am writing in and you are reading on right now. View on Google Chrome. Connect with iPhone 5S. Post on Instagram. We live in a branded Internet, so “Mr. Robot” tells the story of the branded Internet. Indeed, that is part of its particular interest—the story of a corporation that runs almost everything, and one guy who turns out to be the bug in their system. It accentuates its commitment to the real with wry nods to other works of fiction that handle the technologic or just the shape of modern society—“Fight Club,” “Hackers,” and even “The Matrix”; Elliot Alderson has so many of the same syllables as Keanu Reeves’ “Mr. Anderson.”

Elliot works for a company called Allsafe that handles the security for what is, in the show, the biggest company in the world, E Corp. But though E Corp is fictional, it practically isn’t. Its logo, an E tilted 45 degrees to the left, deliberately evokes Enron’s; in the world of “Mr. Robot,” the E occupies the same spaces that a Bank of America flag or an Apple apple do in ours. E sells insurance, credit cards, cell phones, computers. Elliot is on the team that handles their security. And as anyone who has either casually followed the news (or carefully followed Twitter's Infosec Taylor Swift) can attest, digital security is a mass delusion, a comfortable fantasy, a joke. Elliot’s day job is security, but his real occupation is brilliantly and systematically invading privacy—and then deciding what to do with all the information he has. It’s a testament to Malek’s skill that a man with such a vast reach comes across as so sensitive, brokenhearted, and damaged. Much of that is done in voiceover; Elliot speaks directly to us, the audience. But he refers to us as a creation of his mind; he also dispassionately informs us that he’s programmed his brain to replace the “E” of E Corp with “Evil,” and from then on, all we ever see is “Evil Corp.” It’s a jarring disconnect, a seed of doubt in Elliot’s perspective. And the story springs from there.

It would undercut the fun of “Mr. Robot” to explain much more. Suffice to say that the care evident in creating the technically accurate and evocative world of the show is also exhibited in the storytelling—in the visual style, the direction, and in the plotting itself, which so quickly and neatly changes what you believe you are watching that you almost never see the seams. There is a ruthlessness to the emotional manipulation of the show—a sharpness that is a riff on dystopia, a riff on science-fiction, a riff on even the anti-hero drama. And the sharpness is aesthetic, too; this is a series with the cold edges, corporate luxury, and sudden blood of a Don Delillo novel. Last week’s episode ended with one of the best musical cues I’ve witnessed on television, one that was clearly carefully chosen, scrupulously edited, and then, yes—ruthlessly deployed.

The (excellent) finale is tonight, but you’ll be able to catch up with all the episodes on USA’s website or Hulu with your cable provider’s login. Fair warning: The transition from the show’s shadows and haunting classical music to commercials for Wal-Mart, Samsung, and Coca-Cola will be jarring.