Not tonight, honey -- and maybe not ever again

Childbirth drained me of all sexual urges. More than a year later, I'm still waiting for them to return 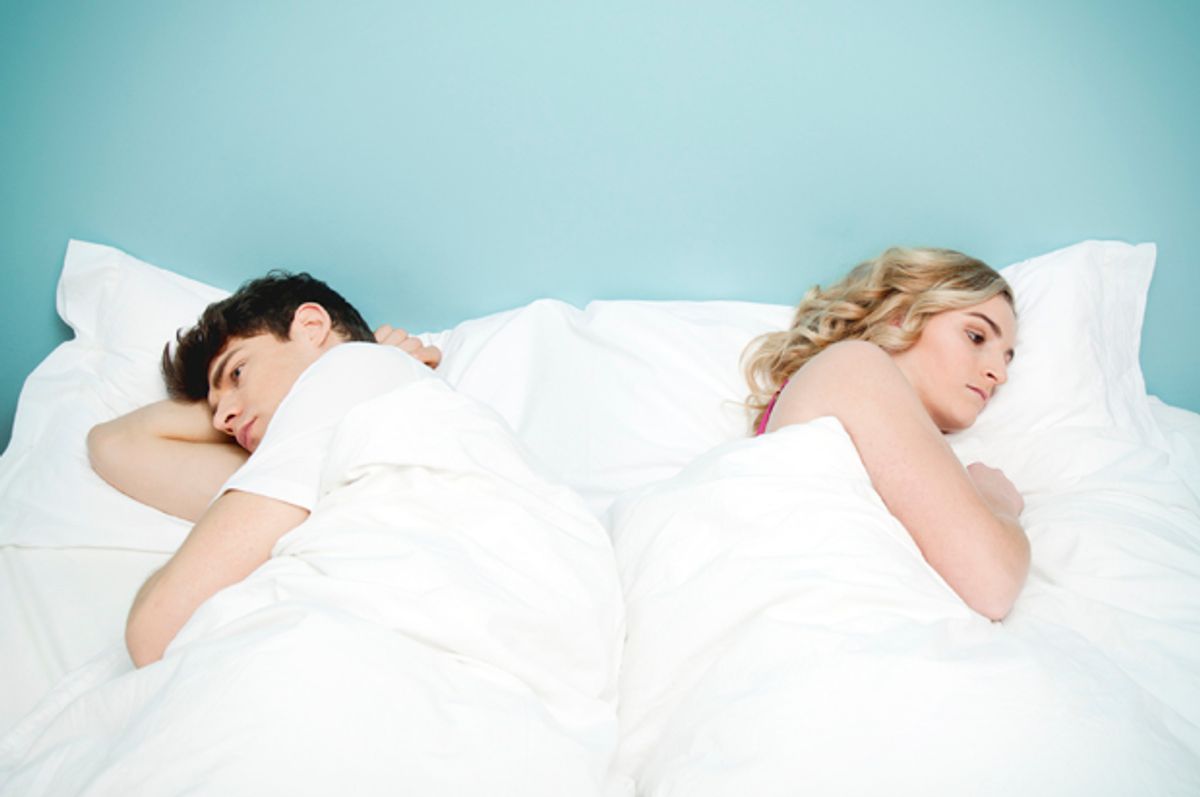 Not-masturbating wasn’t the result of a major decision to abstain. I’d just had a baby on my own and sex was the furthest thing from my mind. Having all urges to orgasm vanish seemed normal at first. This happens after having a baby. It was to be expected. So I waited.

More from DAME: "How I Went from "Poster Mother" to Pariah"

When I tried dating about a year ago, sex had that familiar thrill to it the first few times. I could kiss him without getting nauseous, but touching him could still only be described as “nice.” I thought it’d get better. For those few weeks I didn’t wonder what was going on with me and when I’d be normal again. Then, one night, I sighed. I’d been on top, facing his feet, and stopped rising up and down. This was just too much work. I’d been having sex so I could get some sleep.

A few orgasm-free months went by again, unnoticed, until it was Valentine’s Day. I published an essay about it, and shared it with a few asexual blog administrators and groups online for their approval. I didn’t want to write this thing proclaiming I was asexual and discredit anyone else’s struggle. This lack of feelings and desires that I still called a phase had always been a way of life to others. I couldn’t imagine the horrors of middle school alone.

I could be a gray-asexual, which seemed appropriate to say, because I had no idea what was going on. But maybe I was demisexual, because I was sort of open to finding a connection with someone else again. People in forums identified themselves in these different, passionate ways, in a whole, new, confusing vocabulary that I still don’t fully understand. My loss was short-lived compared to most of theirs. I still had too much of an unknowing, rookie-like uncertainty. So, I waited.

About a month ago, I happened on a well-written article online, and Facebook-stalked the author a little. We had friends in common, and I sent him a message, asking if he’d ever been to my town for a reading through the college, since he looked so familiar. I was making a move, using a lame excuse to start a conversation, and my face flushed when he messaged back.

More from DAME: "How Will I Survive August without My Shrink?"

We talked on the phone, then Skyped, dancing to the beats of flirtation. I told my usual stories in the crescendo of anecdotal bassassedness that most men find irresistible. It started with tales of living in a cabin in Alaska where I had an outhouse and chopped my own wood, to my somewhat extensive knowledge of engines, my love of rock climbing, and, finally, dropping in the conversation that I give very, very good head.

We went on like this for a couple of weeks, and traveled to the heavy-petting realm of pictures and dirty texts. He started talking about visiting and I tried my best to be excited. I was supposed to be. I liked this guy a whole bunch and he wanted to fly here to spend a weekend with me. I’d even had this crazy, sexy dream about him where we were on a hide-a-bed in a scene from The Walking Dead, naked, and at the moment of deciding whether or not to go for it and it drove me crazy with lust. Throbbing sensations reappeared for the first time in almost two years. This was fantastic. Really, really great.

Then I’d wake up in the mornings to his sweet texts with the baby next to me and not in her crib and the dog between my legs and I couldn’t imagine him there at all. I didn’t want him there, not really. The thought of a man lying next to me in a half-cuddled position made me physically get out of bed.

It wasn’t a moment of disappointment or sadness. I’d been dishonest with myself, and him. I told him I wasn’t sure about the sex part. I didn’t know if I could follow through on those amazing blow jobs. He might possibly need to sleep on the uncomfortable futon in the living room.

I’d wanted to experience the fizzy feelings, minus the sex. Admitting to him that I was possibly more asexual than I’d thought let me blow out a mental breath I’d been holding in and relax again.

Asexual as a noun means a lack of sexual desire. I have had to redefine myself. Suddenly it’s clear why people in forums had those identities they proclaimed so passionately. If I choose to date again, how do I expect someone to be okay with such a vast difference in libido? I hesitate to join, but I consider signing up with asexual sites. To find people who understand, not necessarily a partner. I don’t know if I’m open to that. But, I think I’ve stopped waiting.