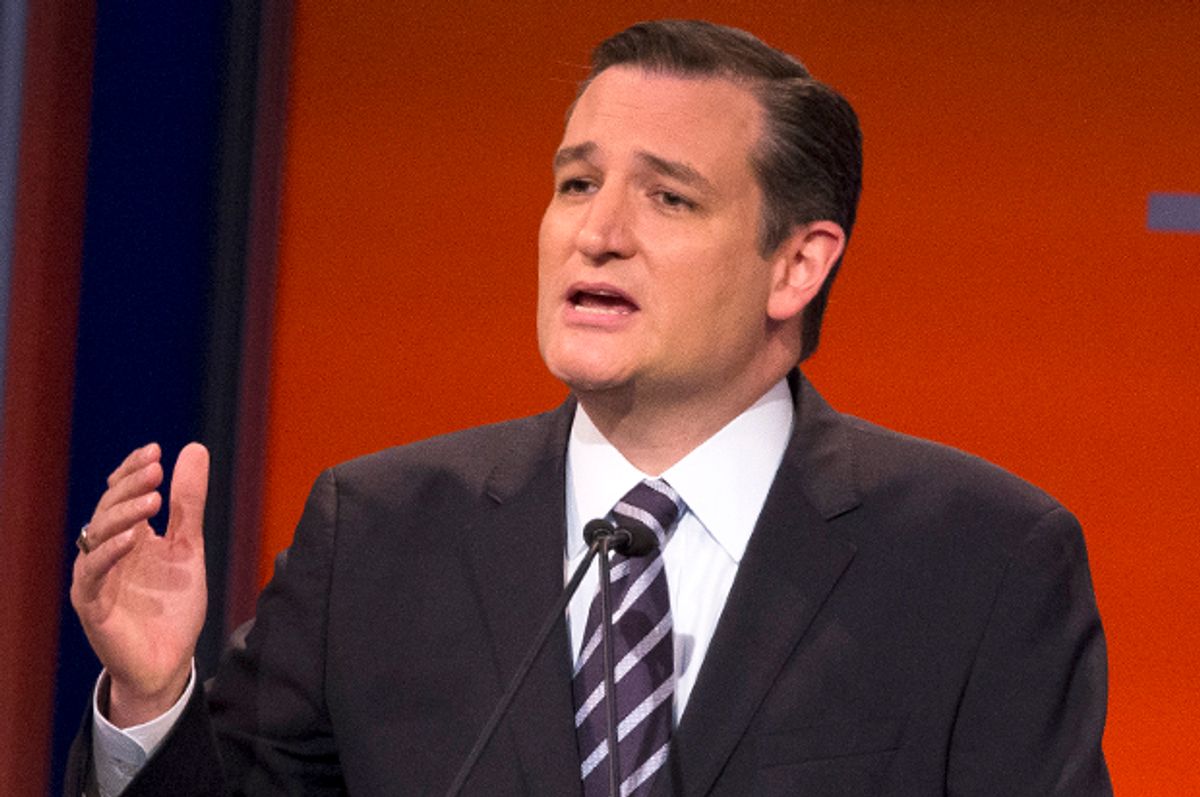 If Ted Cruz swallowed an enema, I’m convinced he’d disappear. The man lies and panders and exaggerates with near-heroic virtuosity. If you’ve watched him in the debates or on the stump, you know exactly what I mean. As I noted a few weeks ago, Cruz delivers every line as though he’s auditioning for “Hamlet.” His flair for the dramatic has kept his name in the headlines, which is all that matters in the Republican Party.

For several months Cruz has positioned himself as the candidate of right-wing theocrats. His only real competition on this front has been Mike Huckabee. Bobby Jindal and Rick Santorum have tried to desperately to appeal to this same constituency, but no one has cared and even fewer have listened. So we’re left, it seems, with Cruz as the savior of the Christian right.

As bad as this sounds (and it sounds bad), there may be a silver lining. Like most demagogues, Cruz plays fast and loose with his rhetoric – he can’t help but cross the line. A man who needs applause as badly as Cruz does will, eventually, collapse under the weight of his own bullshit. Cruz may have reached such a tipping point last week in Iowa.

His campaign held a quasi-prayerapolooza in Des Moines last week in order to announce his 50-state crusade to end all taxpayer support for Planned Parenthood. An obvious ploy to garner support among social conservatives, Cruz invited over 100,000 pastors across the country to join his movement (read: campaign). The event, like everything else Cruz does, was a marketing platform. He told the largely evangelical crowd the lie they so desperately want to believe – that faith is under assault in this country: "There is a war on faith in America today, in our lifetime…Did we ever imagine that in the land of the free and home of the brave, we would be witnessing our government persecute its citizens for their faith?"

This sort of language is as false as it is dangerous, and Cruz almost certainly knows that. But that doesn’t matter. Cruz is a huckster without a positive platform. His goal is to mobilize a group of people already under the misapprehension that their country is under internal attack. “You want to know what this election is about?" Cruz asked the crowd. "We’re one justice away from the Supreme Court saying every image of God shall be torn down.”

Cruz, an Ivy-educated lawyer, knows this is preposterous. He knows the country is overwhelmingly Christian and that the law in no way threatens private belief. But the people in that crowd are paranoid and scared and Cruz is more than happy to feed their fears and offer himself as the solution. His Iowa campaign chairman, Matt Schultz, put it bluntly: “We're at a crossroads in our country…Ted Cruz is the man who God has prepared for this moment in time to be our champion, to fight for our husbands, our wives, our children, and our grandchildren, for our country."

Got that? God is angry with America and, apparently, He has sent Mr. Cruz to clean up the mess. This nonsense would be amusing if it wasn’t believed. Cruz wants conservatives to believe that enforcing secular laws in a secular state constitutes a “war on faith.” Ask a Yazidi in Iraq what religious persecution or a “war on faith” looks like – I assure you it doesn’t involve selling cakes to gay people.

The only thing worse than an earnest theocrat is a pandering politician pretending to be one without any regard for the consequences – and that’s exactly what Cruz appears to be. He offered a glimpse of his cynical strategy in a recent interview with the News & Observer:

“I think my natural bracket is the evangelical bracket…There are number of other candidates who are competing. Mike Huckabee is likable, he is affable, he is a Southern Baptist minister. There are others in that bracket -- Rick Santorum, Rick Perry, Bobby Jindal, Ben Carson. I think at the end of the day, Huckabee and I come out of that bracket neck and neck.”

The phrase “evangelical bracket” is instructive. Cruz fancies himself a salesman, not a statesman. He’s peddling a product and his constituents are the consumers. It’s impossible to know what Cruz really believes because he behaves (and thinks) like a businessman appealing to customers, not a politician appealing to values. The “evangelical bracket” is Cruz’s target demographic (his customer base), and everything he says is designed to placate them. And his supporters are too busy having their biases confirmed to notice the transaction.

It’s true that all politicians pander one way or the other, but Cruz is a special breed. He’s impervious to shame. He knows his Planned Parenthood stunt won’t amount to anything, just as he knows it’s still perfectly legal to be Christian in America, but none of that matters. Cruz is just playing to the persecution mania of fanatics, who will surrender their votes to anyone who indulges their delusions. Fundamentalists flock to Cruz because he tells them they’re right and that everyone else is conspiring against them – that’s an easy sell to a room full of purists. And he knows the theocrats want to hear that Congress is a godless cartel and that he’s the warrior-politico they need to take the country back – that, in short, is Cruz’s entire campaign narrative.

Fraudulent as he is, Cruz has staying power. He’s charming in a peculiar way, like a creepy but compelling televangelist. If he wasn’t poisoning the body politic with his demagoguery, I imagine his campaign would be amusing.

But people are taking him seriously, so we have to as well – unfortunately.