Was Jorge Ramos rude to Trump? Sure, because Trump won't answer questions about his reprehensible immigration plan 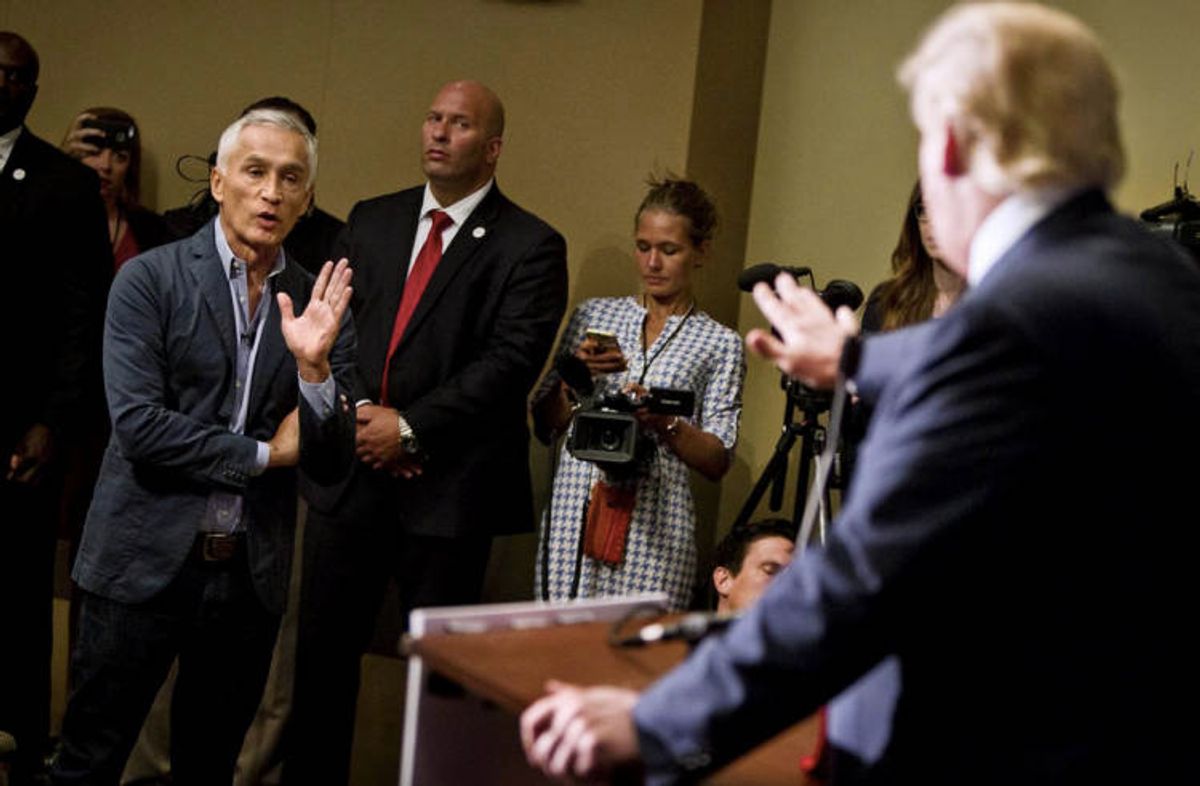 The defining feature of Donald Trump’s presidential campaign is that it isn’t so much a “campaign” as it is a rolling series of feuds and petty disagreements provoked or nurtured by the candidate. The list of politicians, reporters, celebrities, and publications Trump has traded insults with over the last two months is long and forever growing, and its most recent addition is Univision anchor Jorge Ramos, whom Trump ejected from a press conference yesterday after Ramos tried to pin him down on his immigration plan.

Because everything about Trump has to be about the spectacle, the discussion turned immediately to the clash of personalities and attempts to figure out which party merited our outrage: Ramos for speaking out of turn at the press conference, or Trump for having him thrown out. Dopes like MSNBC’s Joe Scarborough said Ramos – the most prominent Spanish-language journalist in the country and perhaps the world – was “looking for his 15 minutes of fame.” Erick Erickson, who made a big show of disinviting Trump from his GOP 2016 for insulting Fox News’ Megyn Kelly, sided with the Donald completely in his fight with Ramos. “What is really amazing,” Erickson opined, “is that the media is more outraged with Trump throwing Ramos out of the press conference than they are at Barack Obama sending the Department of Justice after reporters.”

If you want to ding Ramos for creating a scene and speaking out of turn, fine. Whatever. The outrage you muster over Ramos should be tempered by the fact that he was trying to nail down the Republican frontrunner on the details of his immigration plan – a plan that is obviously illegal, is in flagrant violation of international norms, and would condemn a broad swath of people to a nightmare of stateless existence.

Just to refresh everyone on what we’re talking about here, Trump’s plan for immigration is to deport every single undocumented immigrant in the country, deport their children who are U.S. citizens by birth, and then revoke birthright citizenship for children born to undocumented immigrants. He’s had plentiful opportunities to explain precisely how this plan would work, but instead of providing details he talks about how dangerous immigrant criminals are.

The notion that we’re going to round up people who were born citizens of this country, deny them their constitutionally guaranteed rights, and expel them from their native land because of the actions of their parents is morally indefensible and legally unjustifiable. The fact that this is the position of the front-running Republican candidate for the presidency should be treated more scandalously than it is.

In calling for mass deportation and ending birthright citizenship, Trump is creating the conditions for a massive humanitarian crisis in which huge numbers of people inside and outside the United States find themselves unbound to any state or government. “Stateless individuals cannot participate in any political process anywhere,” Mother Jones’ Bryan Schatz explained this morning. “They're often subject to arbitrary detention. They have limited access to health care and education. They are especially vulnerable to crime and have little legal recourse if they are victimized. They have no economic rights and few job prospects.” Trump’s plan essentially calls for the existence of a stateless underclass within the country, a whole segment of the population condemned to disenfranchisement and victimization by the accident of their parentage.

This is what Jorge Ramos was trying to get Trump to elaborate on when he spoke up at that press conference yesterday. Instead of answering Ramos’ questions, Trump threw him out. When Ramos came back and was given the opportunity to ask about Trump’s immigration plan, Trump offered his usual mix of bluster and evasiveness. On revoking the citizenship of children of immigrants, Trump said “great legal scholars” agree with him. Asked how he’d deport every single undocumented immigrant, Trump offered that he’d “do it in a very humane fashion.” He didn’t even pretend to provide a coherent rationale for all the horrible things he wants to do to immigrants and their families. If you’re upset by Ramos’ tactics or offended that he wasn’t respectful enough towards Trump, you’re very much missing the larger picture.